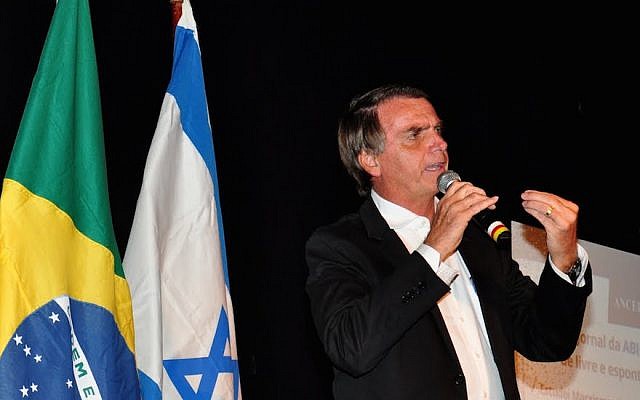 Newly elected Brazilian President Jair Bolsonaro has said that he will move Brazil’s embassy in Israel to from Tel Aviv to Jerusalem.

Bolsonaro made the pledge to move the Brazilian embassy in August. He said he would shut down the Palestinian embassy in Brazil, noting that Palestine isn’t a country.

“Is Palestine a country? Palestine is not a country, so there should be no embassy here,” he said.

“You do not negotiate with terrorists,” he added, referring to how the Palestine territories are mostly controlled by the terrorist group, Hamas.

Bolsonaro, 63, has spoken highly of Israel during his campaign and said at one point that his first international trip as president would be to Israel. This was further speculated this week, after his future chief of staff said he plans to visit Israel after trips to Chile and the US.

“Bolsonaro stood out among the many candidates for including the State of Israel in the major speeches he made during the campaign,” Israel’s honorary consul in Rio, Osias Wurman, told JTA. “He is a lover of the people and the State of Israel.”

His son, Eduardo Bolsonaro told Bloomberg in August that Brazil should sever ties with Venezuela’s socialist government and distance itself from Iran, which supports multiple terror groups, while getting closer with Israel.

“You need to play tough with Venezuela. It’ll be a 180-degree change in relation to Venezuela,” he said. “Pro-Iranian position? It’ll change.”

About moving the embassy in Israel to Jerusalem, he added, “We’re very sympathetic to the idea. Our side is being against Hamas, Hezbollah, the Islamic state.”

Bolsonaro will take office on 1 January next year.

We welcome President-Elect Bolsonaro's announcements that he will move the Brazilian Embassy from Tel Aviv to Jerusalem, travel to Israel on his first international trip, and close the Palestinian mission in Brasilia.#cufi #bolsonaro #brazil #embassy #israel pic.twitter.com/6hUWaNfM1T