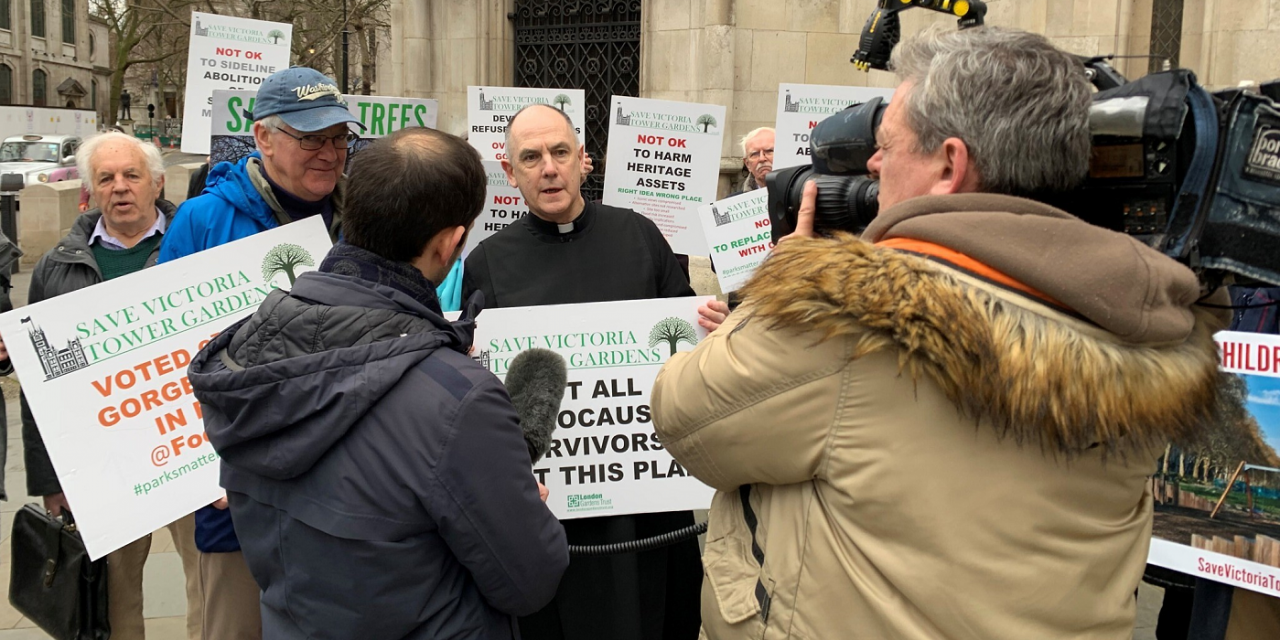 “It feels like we are at a juncture in history… As we face these challenges, not forgetting lessons from the Holocaust will largely underpin our resolve for ‘never again’.”

Government plans for a national Holocaust memorial outside the House of Parliament in Westminster have been blocked by a High Court judge after the London Historic Parks and Gardens Trust made a legal challenge.

The project, which would see a memorial and learning centre in Victoria Tower Gardens, is a matter of priorities.

According to Mrs Justice Thornton, based on legislation dating back to 1900, there was “an enduring obligation to retain the new garden land as a public garden and integral part of the existing Victoria Tower Gardens”. Despite this, she did not accept the argument that siting the memorial there would have harmed other heritage interests in the proposed location. So what was the reason for blocking the project? Mrs Justice Thornton says the building “would represent an “exceptionally serious intrusion into a green public open space of the highest heritage significance.”

Opponents of the project have argued that a national memorial and learning centre is needed, but should be in a different location. Others have said that the funding would be better spent in Holocaust education programmes. Local opponents meanwhile contest that they want the park to remain exactly as it is.

It is true. The memorial and learning centre could be located somewhere else. But the significance of the location was the very reason why it was chosen by David Cameron’s government and backed by various Holocaust educational bodies.

Karen Pollock, chief executive of the Holocaust Educational Trust, said it was “very disappointing news. Holocaust survivors are elderly, and their numbers are dwindling – time is of the essence.

“Many hope to see the opening of the Holocaust Memorial and Learning Centre standing proudly next to Parliament, serving as a warning from history of what can happen when antisemitism and hate is left unchecked. This memorial will stand as a reminder for generations to come.”

The need is now

It feels like we are at a juncture in history. There is war in eastern Europe. We are witnessing the mass uprooting of civilians and reports of unimaginable war crimes that evoke scenes we thought we would never see repeated on mainland Europe. As a nation, our response to this and future threats will demand wisdom and moral clarity.  As we face these challenges, not forgetting lessons from the Holocaust will largely underpin our resolve for ‘never again’.

And this encapsulates why a Holocaust memorial should proceed in its original location. A location that is front and centre at the heart of Westminster, the mother of all Parliaments, as it was once coined. It was from the House of Commons that Britain’s response to Nazi terror was led. From the intaking of Jewish refugees to Britain’s involvement in the liberation of concentration camps, the Holocaust is part of Britain’s story. Even a concentration camp on British soil, a largely ignored fact, is a reminder just how close Nazi occupation came to Britain’s shores.

But we don’t need to look too far in the past or too far east currently see cause for Holocaust education. With antisemitism at record levels in the UK, we need to face the prospect that the next decade could be crucial for the future of the Jewish community in Britain. Anything to highlight the dangers of antisemitism should be given a national platform, not hiding it away in a less prominent corner.

There is also the matter of honouring Holocaust victims. With Holocaust survivors dwindling in numbers, we should question our priorities. Taking Bible examples, the act of establishing a memorial (whether it was a day, a feast or a stone) was for the benefit of all generations that followed. But it was for that current generation to institute  the memorial. As the Holocaust becomes further in the past, we cannot expect future generations to take this initiative. It has to be commenced today whilst the Holocaust is within living memory so that future generations will remember the victims, the dangers of antisemitism and the cause to act.

It deserves the best

Whilst there has been debate over the design, it should be noted that the development in Victoria Gardens is not insensitive to preserving the park as a greenspace – it will still be a park that will be enjoyed by locals and visitors. But if the park is so important to our capital’s heritage, as opponents claim, doesn’t that importance offer it as the most appropriate place for Holocaust remembrance? Don’t the victims of the Holocaust deserve the best?

The Chief Rabbi Ephraim Mirvis said: “The potential educational impact of placing this memorial in Victoria Tower Gardens, next to the seat of our country’s democracy, greatly outweighs any of the planning objections.”

The recent destruction of Holocaust memorials by Russian missiles in Ukraine, should invoke us to want to protect them more. It is a sad state of affairs if we cannot agree to protect a memorial that hasn’t even yet been built.

The national Holocaust memorial outside Parliament is not an inconvenience, it is an opportunity to leave an important legacy.

Israel's minister of defense has said the cost of dealing with Iran is higher now than a year ago, but less than it will be in a year, adding that Iran is just a "few weeks" from being...
Read More
Share
Tweet
Email
More
43 Shares