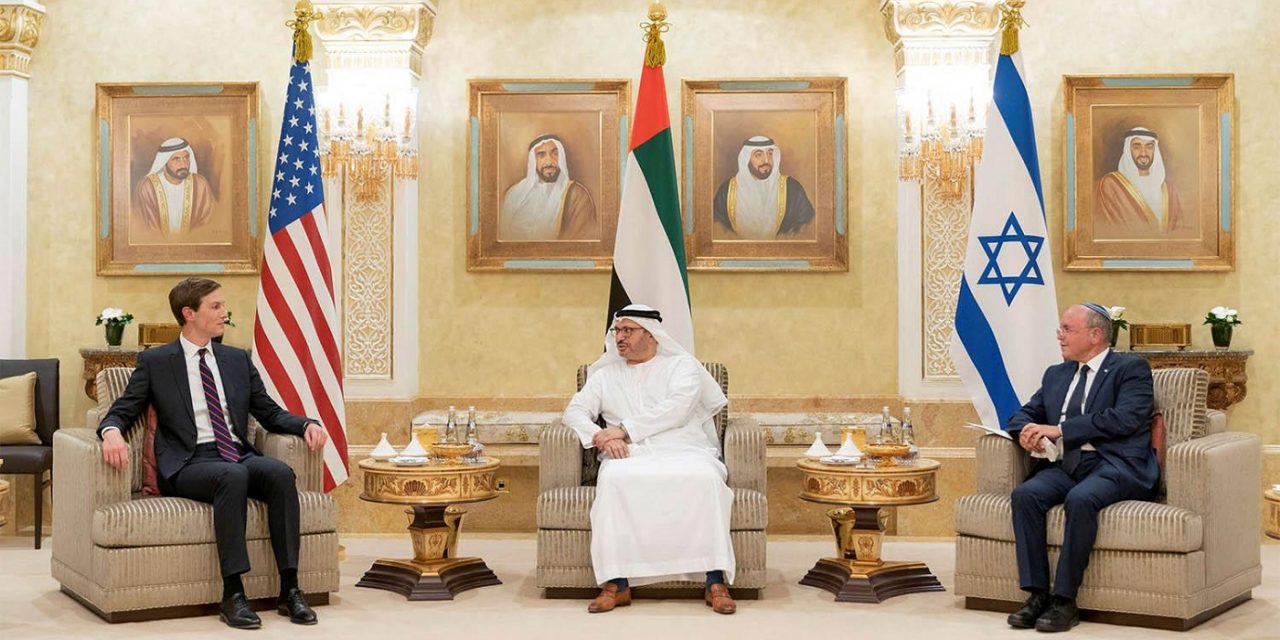 History was made on Monday when an Israeli plane became the first direct commercial flight between Israel and the UAE, whilst also becoming the first Israeli plane to enter Saudi airspace.

El Al Flight 971 from Tel Aviv to Abu Dhabi carried high-level Israeli and US delegations, flying over Saudi Arabia for most of the trip after the kingdom granted permission for the first time ever. The historic event follows the announcement of the ‘Abraham Accord’ between Israel and the United Arab Emirates, which was brokered by the US and set to be ratified by officials during meetings in the Emirati capital.

Right now! History is being made by the first ever Israeli commercial airline to fly over #SaudiArabia enroute to the #UAE.

Pilot Tal Becker address from the cockpit as the plane prepared to depart from Tel Aviv was also shared on social media in which he confirmed the route over Saudi Arabia.

“This flight records two significant events in the history of the State of Israel and in the region heralding another step towards regional peace — for the very first time an Israeli-registered aircraft will overfly Saudi Arabia, and, after a nonstop flight from Israel, land in the United Arab Emirates.

“The duration of the flight with the shortened route over Saudi Arabia will be three and a half hours, instead of what would have been approximately eight hours as we fly eastbound,” the pilot explained. “At the end of this historic nonstop flight, the wheels of this aircraft, with the flag of the State of Israel on its tail, will touch down on the runway in Abu Dhabi, the capital of the UAE. This will be another significant event in our history, just as El Al was there when peace was signed between Jerusalem, Cairo and Amman.

“We are all excited and look forward to more historic flights that will take us to other capital cities in the region, advancing us all to a more prosperous future,” Becker said.

“Wishing us all salaam, peace and shalom,” he concluded, using the Arabic, English, and Hebrew words.

On board the FIRST flight from Israel to UAW

WOW! History in the making! "Ladies & gentlemen, Shalom & welcome onboard flight 971 from Tel aviv to Abu Dhabi."Here is footage from the boarding of the FIRST commercial flight from Israel to the UAE. It is also historic for being the first Israeli airline to fly over the Saudi Arabia.

Since 2018, Saudi Arabia has allowed Air India flights to Israel to use its airspace, but not Israeli airlines, which have to take a long detour via the Red Sea.

Upon landing an official reception was planned to be held at the airport. During the visit to Abu Dhabi, the joint US and Israeli delegation were set to take part in “working meetings” of Israeli-UAE teams “on a range of issues ahead of the signing of cooperation agreements in the civil and economic spheres,” the Prime Minister’s Office said in a statement.

Prime Minister Benjamin Netanyahu spoke with flight captain Tal Becker upon the landing, saying, “I am now watching you with great excitement, the landing of an Israeli plane – in daylight – in Abu Dhabi.”

‘Shalom’, ‘Salaam’ and ‘Peace’ are written on it; this is a start,” he said referring to the words painted on the side of the El Al plane.

“You are now about to open the door to a different kind of peace – peace with investments, peace with tourism, peace with very many fruits of peace that will be shared here with our two peoples, and with all the peoples of the region.”

“This is a gigantic and historic blessing. This is a historic day. I have worked on it for very many years in the belief that peace for peace would bring about a great turning point here, and that the Arab peoples are capable of accepting the State of Israel as an existing fact and as a major partner.”

“In effect, you are starting to put this into practice today, the practical translation of this peace.”

“I congratulate you and I say to all those who stand on the other side of the door that is about to open salaam aleikum, wahlan v’sahlan. This is a historic day. You have no idea how excited the citizens of Israel, myself included, are over this day. We dreamed about it and worked for it and here it is happening before our eyes. Be blessed and do great things!”

Prime Minister Benjamin Netanyahu spoke with flight LY971 captain Tal Becker, upon the landing of the Israeli and American delegations in Abu Dhabi

#PEACE Today the first Israeli flight to the #UAE departed from Ben Gurion Airport carrying an Israeli delegation. The…

Israel and the UAE announced on 13 August 13 they were establishing full diplomatic relations. At the time CUFI’s Exectuive

The UAE is just the third Arab country to agree to establish official relations with Israel, after Egypt and Jordan. Israeli and American officials have expressed hope that other Gulf Arab countries will soon follow suit.

HISTORIC! Rabbi Levi Duchman sounds the shofar and recites a prayer for the rulers of the United Arab Emirates in the presence of the Israeli government delegation this morning.

Posted by Christians United for Israel – UK on Tuesday, 1 September 2020