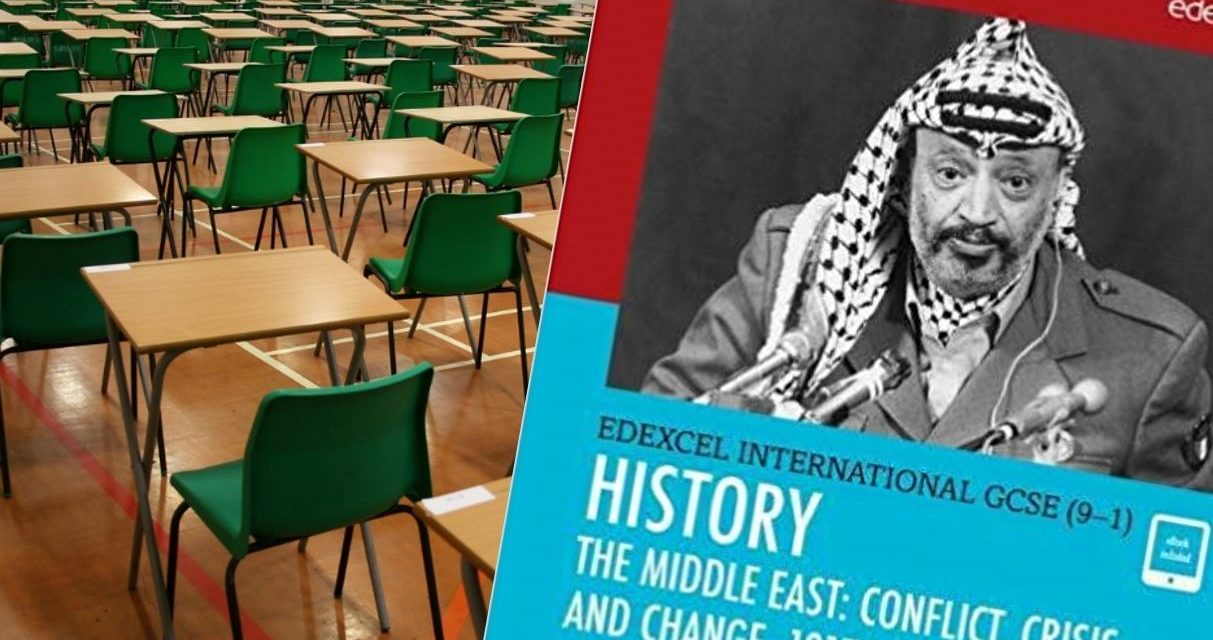 GCSE pupils in the UK are learning about Israel-Palestinian conflict from a “shameful” anti-Israel bias, a new investigative report reveals.

Researching at the request of UK Lawyers for Israel, investigative blogger David Collier says answers must be given explaining why children at British schools are being exposed to this type of indoctrination.

The textbook, ‘The Middle East: Conflict, Crisis and Change’, is part of the Edexcel International GCSE series and is published by Pearson Education.

Collier says, “The fact this textbook is part of the Pearson Library and is taught inside British schools is utterly shameful. The central messages are those that you would find inside an anti-Israel propaganda book. It is carefully constructed and far more subtle, but the longer you read – the angrier you become. How many children inside state funded schools have been exposed to this type of indoctrination? Someone somewhere needs to explain how this is even possible.”

In one instance Palestinian terrorists are are referred to as terrorists or freedom fighters “depending on one’s point of view.”

However, it is internationally accepted that those who randomly target civilians are terrorists regardless of the cause they are fighting for. Palestinian terrorists and terror groups – like Hamas – wage such attacks against Israeli civilians to this day.

Another example provided in the report refers to Arab riots in 1929 in which more than 130 Jews were massacred over a dispute regarding access to the Western Wall.

The textbooks states, “In August 1929, angry clashes occurred over holy sites in Jerusalem. These grew into four days of bloody riots and mob violence throughout Palestine, leaving 133 Jews and 116 Arabs dead.’

However the truth is that 116 Arabs were killed by British forces as they tried to prevent them from murdering Jews.

Collier says, “From the opening sentences, when the textbook called Jewish people 3300 years ago ‘settlers’ until the final chapters – it is almost impossible for the untrained eye to pick apart fantasy from fiction.”

The book spends three pages explaining the Oslo Peace process and then asks the students to explain the failure of the process, but never once mentioned the exploding buses in Israel’s streets. According to Collier it only mentioned a single terror attack during this period.

“How can a student possibly explain the failure of Oslo if you don’t mention the hundreds of Israelis slain in Israeli streets?” he says.

But one of the most striking examples of bias is the use of images.

“Not a single image shows the devastation on Israel and Israelis. Not one.” Collier says, “There was no room for an image of a burnt-out bus, or the damage Hezbollah did to civilian housing.”

The report explains that students are manipulated through imagery, misleading maps and distorted statistics.

“During the Arab anti-British violence, the focus is on Arab victims and the unfair and harsh British attitude. When the Jewish people were violent, sympathies are switched.”

Another area is the omission of a positive quote by Israelis or Israeli leadership in support of peace and against war with no mentions of Israel’s positive actions and strong democracy;
all the while excuses and rationalisations are made on behalf of Arab and Palestinian leaders like Arafat and Nasser, and quotes by them that are anti-Semitic or call for the destruction of Israel aren’t mentioned at all.