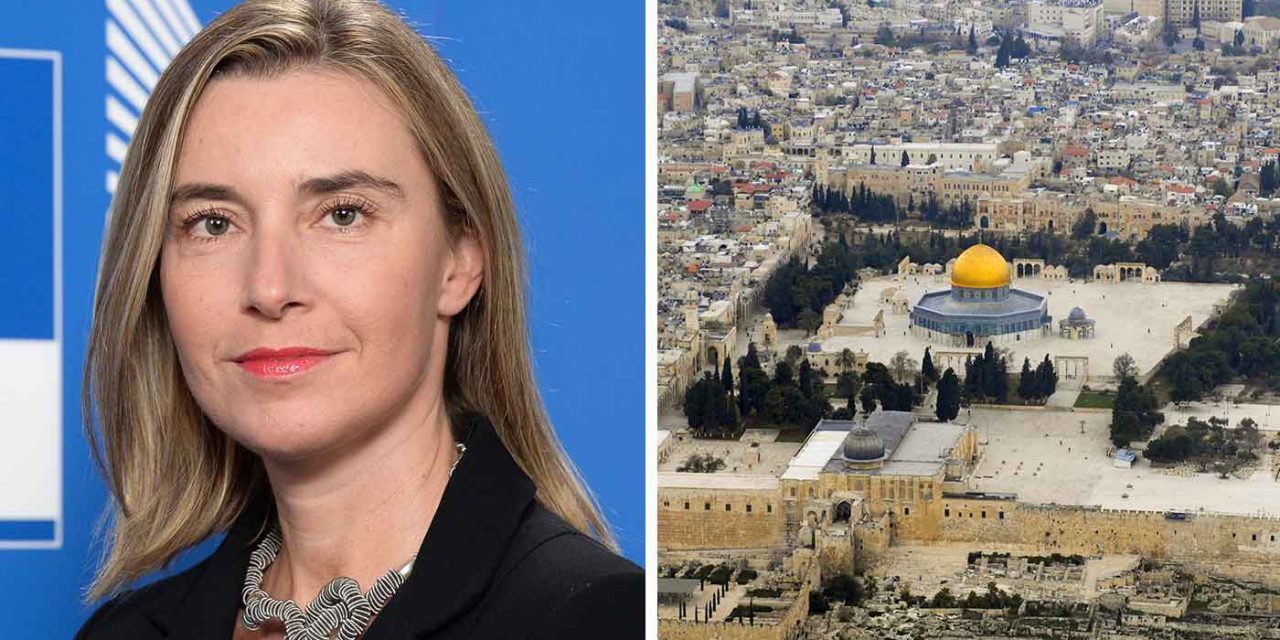 Federica Mogherini agreed Tuesday with Palestinian Authority (PA) President Mahmoud Abbas when she said before a meeting of international donors that a Palestinian state was only possible if it contained every one of the areas the PA has demanded from Israel.

Mogherini, who is the EU foreign policy chief, called for reconciliation between Fatah, who rule the Palestinian Authority, and Hamas, who seized control of Gaza in 2007. She insisted that Gaza had to be united with Judea, Samaria and eastern parts of Jerusalem in a future Palestinian State.

“We see it very clearly: the West Bank, East Jerusalem, and Gaza belong together. There is no State of Palestine without Gaza, nor with Gaza alone,” she said. “This is why we expect all Palestinian factions to defy the spoilers and continue on the path of reconciliation, with courage and determination. The situation is extremely fragile.”

In calling for recognition between Fatah and Hamas, she implied that a Hamas-controlled Gaza would be an acceptable part of a Palestinian state.

The comments came as the EU announced international donors have raised 456 million euros ($560 million) to build a desalination plant in the Gaza Strip, to provide around 2 million people with safe drinking water.

At a pledging conference in Brussels on Tuesday, the EU offered more than 77 million euros, which combined with other donations will meet around 80 percent of the plant’s costs.

EU foreign policy chief Federica Mogherini said providing for the people of Gaza was a priority.

“As regards to the dire humanitarian situation in Gaza, this is and will remain a priority for the European Union. We have provided substantial help in the past and we continue to do so.”

Last month, Israel’s Defense Minister Avigdor Liberman blamed Hamas for the crisis in Gaza, though he said that Israel will not impede any internationally funded projects designed to improve the quality of life for Gazans.

Liberman said the Hamas terror group has poured $260 million into manufacturing rockets and digging tunnels in the Gaza Strip just in the past year. Of that, $100 million came from Iran and the remainder from Gaza taxes.

The Hamas leadership is unwilling to “divert even a shekel” to fix Gaza’s water and electricity woes, said Liberman, while the terror group’s leaders have electricity “24 hours a day.”

The EU also said Tuesday that funding the plant is part of its efforts to help build a Palestinian state.

Mogherini referenced a speech Monday by Palestinian Authority President Mahmoud Abbas in which he accused the Gaza Strip’s Hamas rulers of trying to assassinate his prime minister, Rami Hamdallah, last week, during a trip for the opening of a wastewater plant.

Hamdallah was targeted in a roadside bombing, after entering the coastal territory in a convoy that also included the PA intelligence chief, Majid Faraj.

Abbas condemned the “despicable” attack and said Hamas will be held to account.

“The speech in Ramallah yesterday shows how fragile it is,” Mogherini said. “I would hope that this will not halt the process further, when we should be looking all together for ways to take it forward.”