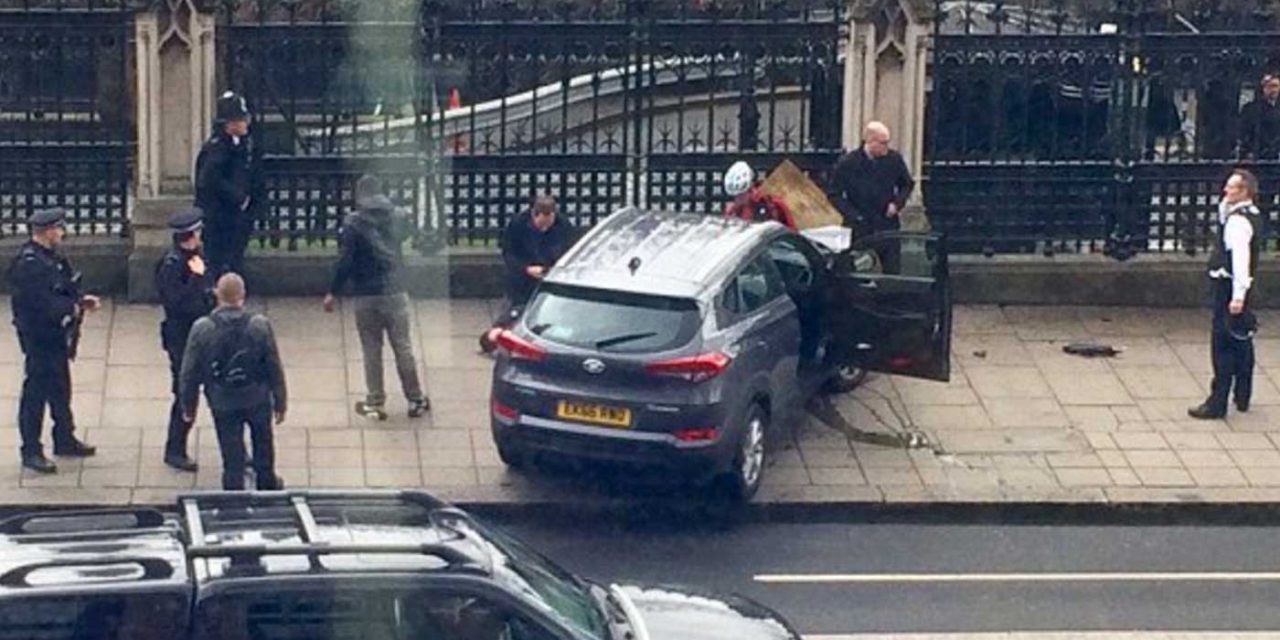 Overview: A terrorist has carried out a car ramming and stabbing attack in Westminster, London, killing at least four people, including two civilians, a policeman and the attacker. There are reports that more that 20 other people have been injured, including some with “catastrophic injuries”.

The attacker was a “middle aged Asian man”. The attacker has been shot and is believed to have died shortly after. Parliament was briefly on lockdown and the Prime Minister has been evacuated to safety.

Warning: Some of the videos below may contain graphic images.

This is a developing story, but this is what we know so far:

The vehicle involved in the ramming on the bridge then careered down onto Parliament Square and smashed into the railings at Westminster Palace.

Stabbing Attack on Police Officer: The attacker was armed with a knife, he exited the vehicle and managed to get into Palace Yard, the area just outside the Houses of Parliament. The attacker then stabbed and killed a police officer.

Terrorist Shot: Other police officers then opened fire and shot the attacker. This is believed to be a single person who carried out this full attack.

Helicopter footage of the scene in #Westminster after a firearms incident. @AliBunkallSKY with the latest pic.twitter.com/LcKNC75XuS

“I heard shouts and screams from outside and looked out, and there was a group of maybe 40 or 50 people running round the corner from Bridge Street into Parliament Square.

“They appeared to be running away from something.

“As the group arrived at the Carriage Gates, where policemen are posted at the security entrance, a man suddenly ran out of the crowd and into the yard.

“He seemed to be holding up a long kitchen knife.

“I heard what sounded like shots – I think about three of them – and then the next thing I knew there were two people lying on the ground and others running to help them.

“Armed police were quickly on the scene and I heard them shouting to people to get out of the yard.”

Body in the Water:

One man has described how he saw a body lying in the water.

Steve Voake, 55, was walking across the Westminster Bridge towards the South Bank when he saw the aftermath.

He said he came across at least two bodies lying on the road and one in the water.

Later reports came in saying that a woman had been pulled, alive, from the river Thames after either being knocked off Westminster Bridge or jumping off the bridge to avoid being hit.

Parliament on Lockdown: Parliament was suspended for the day and put into lockdown. The Prime Minister has been removed to safety immediately and MPs were escorted by plain clothed officers to awaiting vehicles.