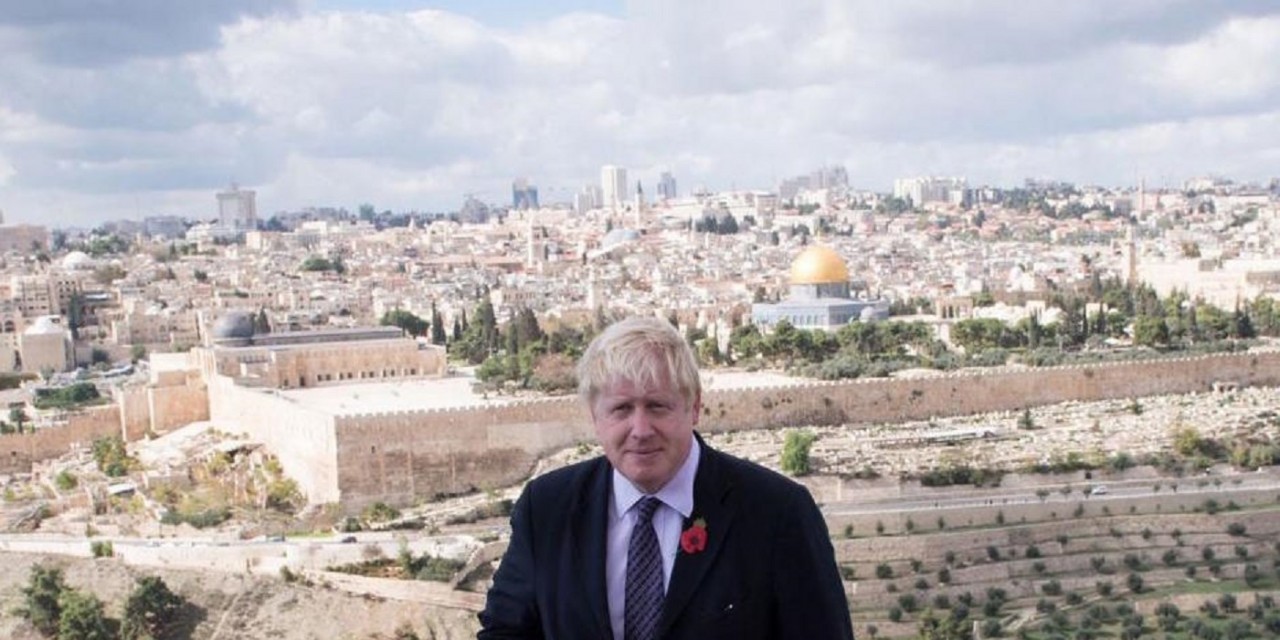 Boris Johnson has said that if he becomes Prime Minister he is prepared to re-start sanctions against the Iranian regime and described himself as a “passionate Zionist”. He also gave support for the Holocaust memorial outside Parliament and that he would continue to keep Palestinian terrorist organisations banned in Britain after Brexit.

Mr Johnson, who is currently in the running to be Britain’s next Prime Minister, gave an in-depth interview with the Jewish News this week, covering a whole host of topics that are important to Zionists in the UK.

Boris says he is pro-Israel and anti-BDS

Boris describes himself as a “passionate Zionist” and says that “wild horses wouldn’t keep me away” from becoming the latest PM to visit the Jewish state.

“I was proud to be the Mayor who led the first-ever London-Israel trade mission. I’m proud that the UK is now Israel’s biggest trading partner in Europe and we saw huge investments both ways, partly actually as a result of that trip. We did a lot of good business but we want to step it up. There’s much much more to be done and I will be actively supporting trade and commercial engagements of all kinds.”

Despite his apparent love for Israel, Mr Johnson has in the past levelled criticism at the actions of the IDF. Most notably in the 2014 Gaza conflict when he described Israel’s actions as “disproportionate”. A term he was asked about in the interview.

“Those of us who support Israel always want Israel to show the greatest possible restraint in all its actions and to do everything it can to minimise civilian casualties. It’s totally unacceptable that innocent Israeli civilians should face the threat of rocket fire and bombardment from Gaza. I understand why Israel reacted in the way that it did and I understand the provocation and the outrageous behaviour that occasioned that response. All I’m saying is that you know in any such response it’s always right to be proportionate.

Mr Johnson described the anti-Israel Boycott, Divestment and Sanctions (BDS) movement against Israel “makes no sense at all”.

“Anybody who knows anything about it knows that actually, the boycott and disinvestment movement will probably hit hardest Palestinian community people who are in jobs, are benefitting from Israeli investment, Israeli farming, whatever. It just makes no sense at all.”

When asked if he agreed with leadership rival Jeremy Hunt’s description of boycotts as “antisemitic”, he said: “I think it often stems from that syndrome, definitely.”

Mr Johnson said he believes the Iran Deal has stopped Tehran from building a nuclear weapon.

We do not see eye to eye with Johnson on this issue. As far as CUFI is concerned, the Iran Deal has been disastrous. It has helped fund Iranian terrorism in the region. On the surface Iran looked as though it was no longer seeking nuclear weapons, in reality, they were still pursuing them just in secret. Israel has proven this. Their leaders have said it. Now it is time for the West to open their eyes to the truth. Please sign our petition to urge the British government to end its involvement in the disastrous Iran Deal.

Whilst we don’t agree with Boris on the effectiveness of the Iran Deal, it is reassuring that he understands the threat that Iran poses to Israel and the region.

Boris went on to say:

“I don’t want people to think I’m in any way soft on Iran.

We face a very difficult situation and I am certainly prepared to go down that route if they have breached the nuclear deal. My strong, strong advice to the Iranians would be to cease this madness, not to take any further steps that would break the terms of the agreement, and not to acquire a nuclear weapon.

“I think that there are enough tensions in that region without triggering a nuclear arms race, whose consequences would be very hard to foresee, and which would certainly pose very difficult choices for any Israeli government.

I certainly think you could not fault the UK government for being tough on Iran’s sanction busting. As Prime Minister, I’d make sure we continue to do everything we can to constrain Iran’s disruptive behaviour in the region.”

To read more about the current threats from Iran, click here.

He also strongly condemned the Palestinian policy of offering salaries to terrorists. “There are funds that are made available to the Palestinian Authority that end up in the pockets of terrorist families, and that is indeed a point I raised with Mahmoud Abbas, and will continue to raise,” he said.

“I think it’s ludicrous that there should be any kind of financial incentive or compensation for terrorist activities.”

Mr Johnson confirmed that, in the UK, “all the necessary steps” will be taken to ensure terror groups like the political wing of Hamas, the Popular Front for the Liberation of Palestine and the al-Aqsa Martyrs’ Brigade remain proscribed in Britain post-Brexit.

According to the Jewish News, these organisations are currently proscribed in member states as a result of being on EU banned lists, with the Board of Deputies and Jewish Leadership Council warning the Treasury would need to act to prevent a lifting of sanctions when the UK leaves the EU. The former London mayor committed to “copy over the list of organisations that are currently on EU-only lists”.

On the threat of a Jeremy Corbyn-led government

When asked about the threat of a Jeremy Corbyn getting into power, Boris said the best way of avoiding that scenario was to leave the EU in October and insisted he had the “credibility to explain the Brexit deal that I do to the country. It will be a very good deal but if necessary we’ll have to come out without a deal. I also have a lot of experience of defeating the London Labour left.”

He said this referring to his experience defeating Ken Livingstone, the far-left Corbyn ally, to become mayor of London.

When asked if he thought Corbyn was an anti-Semite, Mr Johnson replied, “I can’t make a window into his soul, and discover exactly where his feelings lie on this. I think there is no question that he is indulging and condoning antisemitism in the Labour Party that is quite extraordinary and reprehensible. It would never have been tolerated 20 years ago.”

Will he be moving the British Embassy to Jerusalem?

Johnson said he “could see the logic” in moving the British Embassy to Jerusalem but believed “the moment for us to play that card is when we make further progress”.

However, it would appear that Mr Johnson is more open to the embassy move than previous Prime Ministers.

Boris also gave his recognition to a two-state solution, but said that the time for Britain to formally recognise Palestine would be when the Palestinian leadership “meaningfully recognises Israel and stops threatening to revoke recognition”.

Protecting British Jews, their traditions and the planned Holocaust Memorial

If Boris Johnson wins the keys to Number 10, he has assured British Jews that the government will continue to fund security for the Jewish community. He said the funding would “absolutely” remain at least the same levels as today.

He added: “I will make sure that shechita (kosher slaughter) is protected and traditional observance is permitted. Of course, it is very important also that this country maintains high standards of hygiene and animal welfare.”

He will also “continue to support” the planned Holocaust memorial and learning centre in Westminster. This is something we as CUFI are campaigning for.

If you would like to add your name to our petition to “Save the Westminster Holocaust Memorial”, click here.