Boris Johnson, the Mayor of London, has had a successful week in Israel, despite what some of the media wants you to believe.

His “mission” aimed to strengthen trade ties between Israel, the United Kingdom and the Palestinian Territories took him around the country, brought him in meetings with some of the most influential leaders in the land and produced some quips and comments that only Boris could provide.

Here is an overview of the trip:

The Mayor of London hailed Israel’s hi-tech achievements as “an absolute education” as he opened the Tel Aviv Stock Exchange on Monday morning.

On the trip with Mr Johnson was Nikhil Rathe, the chief executive of the London Stock Exchange, who said: “Israeli companies are really starting to see the benefits of London – the time zone, depth of investor base we can bring. We’re really just scratching the surface and there’s a huge amount of potential.”

Rathe continued, “All of us working in this world need to do much more to explain the pace with which Israel is developing and the sheer number of start-ups that are producing world-beating products.”

After visiting the stock exchange, the mayor was introduced to several cutting-edge gadgets during an event at Google’s campus in Tel Aviv. He even experienced life as a dog after donning “googles” created by Israeli company MindCet. 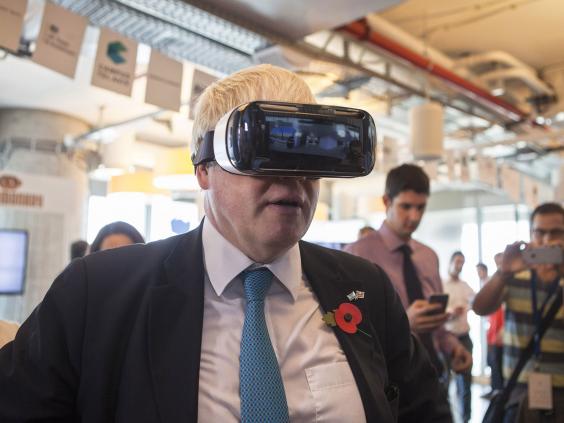 Speaking to the Jewish News about Israeli innovation he said. “Israel has been responsible for everything from USB memory sticks to all sorts of apps that are of great value. The country has played a huge role in computing generally and the whole tech explosion. But it’s more fundamental than that: the world would be greatly poorer without Israel…”

During Boris’ time in Israel he was guest at the 98th anniversary dinner for the Balfour Declaration. Both he and Yair Lapid had great things to say about each other and their respective countries.

“The Balfour Declaration was a great thing,” Mr Johnson told the 300 guests at the Hilton Hotel on Monday night. “It was the right thing, it reflected a great tide of history.”

He went on to speak of Israel and Britain’s role together, “Sometimes it is the synergy between the London environment and Jewish brilliance” that produces the best results – citing a number of inventions including fish and chips.

Highlighting the similarities between Israel and the UK’s achievements and outlook, he added: “It is a partnership of innovation, and that spirit of innovation is only possible because of our shared values, values that are not trivial and are often under siege.”

Yair Lapid praised Boris Johnson as a “true friend of Israel” and hailed Britain’s role in the founding of the Jewish state at the dinner.

Lapid paid tribute to the British decision to support a Jewish state in face of “a colossal Arab majority ” and recognition early in the century that ‘oil would power the world’ so “whoever stands with the Jews will pay a price. The fact that Great Britain did that is proof once more that nations, like people, are willing to take risks, and even pay a price, to be just and good. That is not to be taken for granted.”

He concluded, “Jews are people with long historical memory. We will not forget this act of goodness and will forever be grateful.”

As millions of people in Britain held a two minute silence at 11am on 11th November, the Mayor of London joined them from Jerusalem, remembering those who gave their lives for our freedom. Boris stood in silence while overlooking Jerusalem from the Mount of Olives.

As if this day wasn't powerful enough: Boris observes silence for Armistice Day overlooking the Mount of Olives pic.twitter.com/8uq0EbUAxu

Boris also made a visit to Yad Vashem (Israel’s Holocaust museum) while in Israel during which he was visibly moved. Throughout the tour he was sullen-faced, often shaking his head and expressing his shock and dismay at some of the information he was taking in.

After his visit he said, “No one must ever forget the truth of what happened and this museum will help ensure the lessons of that horror stays in our hearts forever. It’s very important we learn and understand because it still has lessons for humanity today.”

Speaking of the layout of the museum, Mr Johnson added that he was struck by the “extraordinary hope” presented to museum visitors as they left and stepped “into the light” of Jerusalem.

He added: “And you understand the colossal, vital and historic importance of creating, ensuring and defending a homeland for the Jewish people.”

Fun in the Jerusalem Market

In a Jerusalem market, Boris got an excellent picture with a fish and quipped, “It looks like it’s eaten something huge, too. It could literally feed 5,000 people.”

Boris also tried his hand at cooking with Assaf Granit, executive chef of the Palomar Restaurant in London.

Football with Jewish and Arab Children

Boris displayed his footballing skills along with Israeli President Ruben Rivlin in a football match with Jewish and Arab children. The match was to show how Israel is bringing diversity through sporting projects and promoting co-existence between different groups.

Jewish and Arab kids preparing to play football with Boris and @PresidentRuvi. Media eager for another Japan moment pic.twitter.com/YvIxfD6WYi

Visiting the holy sites of Israel

While in Jerusalem Boris got to visit the holy sites of Judaism, Islam and Christianity. He prayed at the Western Wall, had a tour inside the Dome of the Rock and visited the Church of the Holy Sepulchre.

At the wailing wall Mr Johnson wrote, “It is a great privilege to come to this wall for the first time in my life and I join in prayers for peace in Jerusalem.”

Spent time this morning at the 3 holy sites of Haram al Sharif, the Western Wall & the Church of the Holy Sepulchre pic.twitter.com/eStSGS4nwU

At one point during his visit Mr Johnson was asked his views on the Boycott, Divestment and Sanctions (BDS) Movement.

“I cannot think of anything more foolish” than to boycott “a country that when all is said and done is the only democracy in the region, is the only place that has in my view a pluralist open society,” he said.

Boris is boycotted by the boycotters

As a result of his comments about the BDS, two meetings on his last day in the West Bank were cancelled simply because they disagreed with what he said.

Media outlets like the BBC went full force to try and discredit Boris because of his remarks, even calling into question his potential as a future leader of the Conservative party, and making out that his whole trip to Israel was a waste of time as a result of his ‘flippant comments’.

However, it is extremely inaccurate to suggest that a few minor meetings being cancelled meant everything else he accomplished over the course of his visit was a waste of time.

There have been reports that some of the meetings were cancelled by the organisers themselves, while others say it was because of security concerns. Mr Johnson said, “There’s some stuff going on on social media apparently, so rather depressingly we can’t do the youth forum and one other meeting.”

Reporters were later informed the Palestine Women’s Business Forum was also off.

Asked about the security threat, Mr Johnson said: “The reality is we were determined to come here even though it’s quite a difficult time at the moment and there’s a lot of tension.”

“I think that some people have obviously taken remarks I made about the boycott, which is after all British Government policy, they’ve taken offence of that and that’s been very much whipped up on social media.”

“So, we had a message from the office of the prime minister that the security with us was going to be perhaps at risk and so we’ve had to think about those meetings.”

Mr Johnson said he hoped they would go ahead but the current situation is that they would not. He went on: “If it’s true people are making threats or whatever, that’s very sad.”

European leaders say what Boris Johnson said about BDS every single day and are still wonderfully received in Ramallah. What happened today?

Even though some of his meetings were cancelled, Mr Johnson was still able to meet up with the Prime Minister of the Palestinian Authority, Rami Hamdallah.  Mr Hamdallah not only welcomed him with open arms, but also agreed with Boris that boycotting Israel is wrong.

Mr Johnson told reporters, “I think on the boycott it was very striking just now that the prime minister of the Palestinian Authority himself said very clearly and several times that he was opposed to a boycott of Israel.”

”That is the right position. It’s a shame that some elements have been whipping up social media so that there seems to be some security issue.“

When a journalist asked if his remarks had damaged his tour of Israel, Mr Johnson responded, “On the contrary, what you’ve got is a simple repetition of what is not only British Government policy but also policy that is supported by the prime minister of the Palestinian Authority.”

At the end of his visit he went on to speak with Palestinian business leaders in East Jerusalem and took part in an “engaging debate”.

We consider Mr Johnson’s trip as a huge success and hope that Boris’ visit to Israel had a positive impact on him personally and will serve to strengthen ties between Israel and the United Kingdom.

Well done Boris, you have done your country proud!