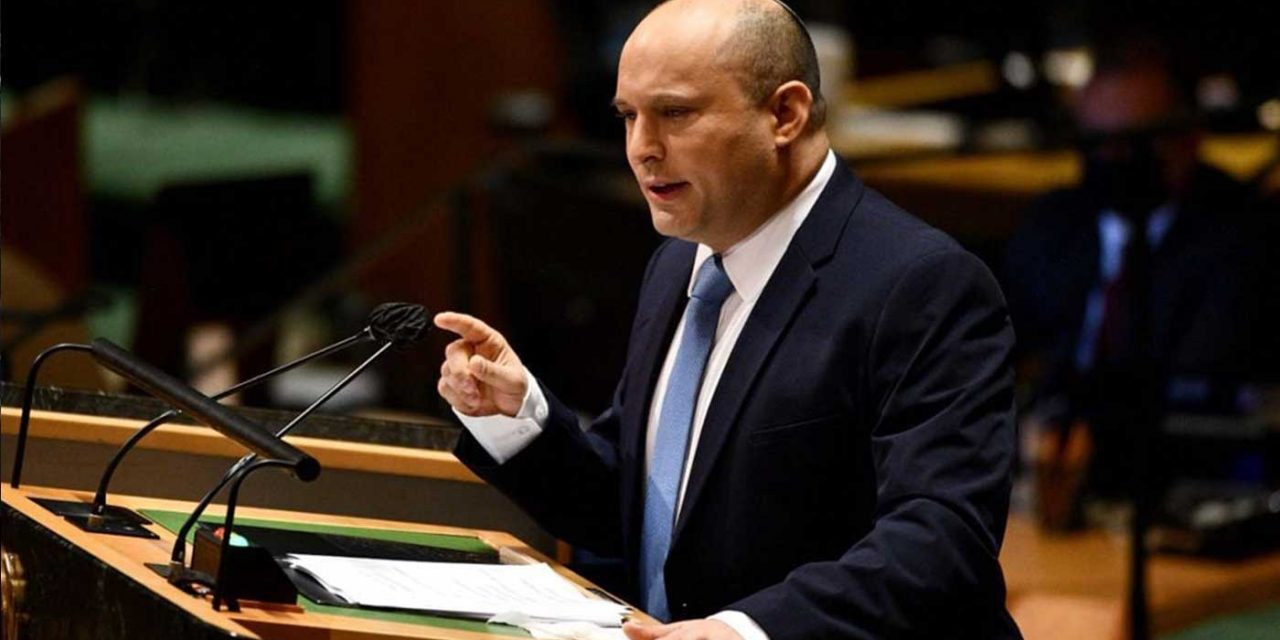 Bennett’s first speech to the United Nations included a warning to the world to take action against the Iranian regime’s destructive behaviour, including their ambitions to obtain nuclear weapons.

Bennett explained the threats against Israel from the various puppets of the Iranian regime, such as Hezbollah in Lebanon, Iranian militants in Syria and their terrorist proxies in Gaza.

“Iran seeks to dominate the region — and seeks to do so under a nuclear umbrella,” Bennett said. “For the past three decades Iran has spread its carnage and destruction around the Middle East, country after country: Lebanon. Iraq. Syria. Yemen. And Gaza.”

Bennett compared what he called Iran’s “Mullah-touch” to the Midas touch of Greek mythology: “Every place Iran touches — fails.”

He emphasized this destructive nature of the regime by highlighting Iranian UAV attacks on civilian shipping, Saudi and US targets, before turning to new Iranian President Ebrahim Raisi and his atrocious human rights record.

“In 1988, Iran set up a death commission that ordered the mass murder of 5,000 political activists,” the premier said. “They were hanged from cranes.”

“This death commission was made up of four people. Ebrahim Raisi, Iran’s new president, was one of them.”

“One of the witnesses of this massacre,” Bennett continued, “stated in her testimony, that when Raisi would finish a round of murder, he’d throw a party, pocketing the money of those he just executed… and then would sit down to eat cream cakes.”

Bennett warned that Iran’s nuclear programme is at a crucial point that cannot be left alone any longer.

Shortly after Bennett’s speech, Israel’s envoy to the United States and the United Nations warned that world powers are increasingly considering a “plan B” to stop Iran’s nuclear intention should words fail.

“The international community and Americans are starting to talk to us more about a plan B on Iran,” Gilad Erdan told Israel’s Army Radio, without elaborating on what the alternative plan would entail. “In the past, the estimate was that there was an 80 percent chance it [Iran] would return to the [2015 nuclear] deal, today that has dropped to around 30%.”

“If Iran doesn’t return [to the deal], this changes the whole picture for the world,” he added.