Belarus: Remains of 1,000 Jews massacred by the Nazis discovered in mass grave 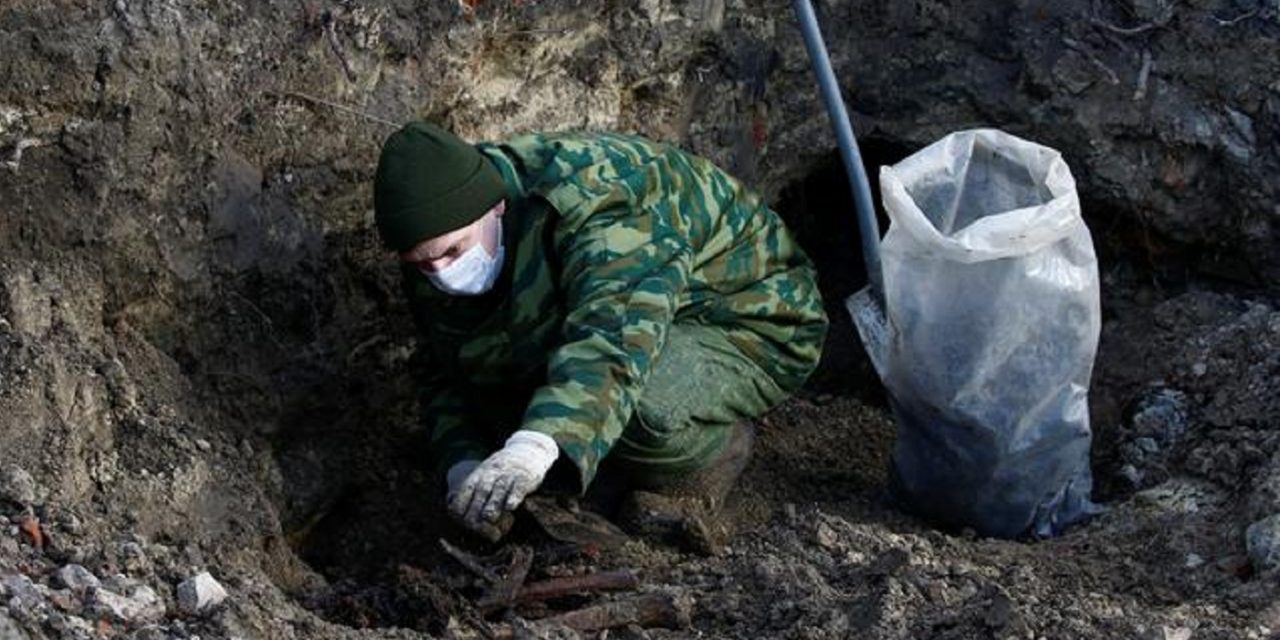 A mass grave containing the remains of more than 1,000 Jews murdered by the Nazis has been found in Belarus.

Bones of men, women and children with gunshot wounds to their skulls have been located by chance at a building site in the city of Brest on the Polish border.

WARNING, the images contained in this article are upsetting

Soldiers wearing white masks on Tuesday sifted through the site with spades, trowels and their gloved hands to collect the bones. They also found items such as leather shoes that had not rotted.

Dmitry Kaminsky, a soldier leading the unit, said they had exhumed 730 bodies so far, but could not be sure how many more would be found.

City official Anna Kondak said: “We expect the number of victims to go over 1,000.”

Some 17,000 people are known to have been shot in October 1942 near Bronnaya Gora railway station, while thousands more were also presumed to have been slaughtered.

Historic accounts say victims were ordered by Hitler’s forces to strip naked before being shot.

Nazi-era mass grave discovered on building site in #Belarus
Construction on the site of a former Jewish ghetto has unearthed the bones of over 700 people shot during WWII. The mass #grave was discovered during construction work in the city of Brest, near the #Polish border pic.twitter.com/ns689D41wq

The recent discovery of human remains came during excavations for a new luxury residential development and a shopping mall, said city officials.

The building work has been suspended while the remains of the mass murder victims are disinterred.

Ms Kondak said: “During three weeks, every day about 40 remains are being found.

“Now the overall number is around 600. As far as we know, there are two major graves here.

“We have almost finished with the first one. After this, experts will start on the second one.”

Governor Alexander Rogachuk said: “We will not allow the building of anything on bones of people.”

Local reports say the human remains have been found in a 20 metre long pit, some 1.5 metres deep.

One account said they included “men, women, and children, all with gun shot wounds in their skulls”. Previous mass graves have been located in Brest in 1950 – when some 600 victims were re-buried at Trishinskoe cemetery, and in 1970 when 300 murdered people were re-interred at Proska cemetery.

Rogachuk is reported to have held a meeting with representatives of the Jewish community in Brest and suggested to re-bury the remains at “Severnoe” cemetery.

This burial ground already includes victims of the Holocaust.

The Jewish community is demanding that religious traditions should be followed during re-burials.

The Kats sisters who survived the mass slaughter in Brest ghetto – concealed in an attic – heard the mass killing.

“Workers came to dig graves early in the morning,” said their account.

“I heard a child crying: ‘Mama, let this bullet be very soon, I am so cold…’

“It was in November, and they had to get undressed and stay naked.

“About 5,000 people are lying there, behind our fence, at block 126 Kuybysheva Street…”

A petition has been started in Brest demanding that building work is permanently halted at the site of the mass shooting.

So far 492 people have called for a memorial park to replace the residential development and shopping centre.

The matter is being discussed by the city authorities.