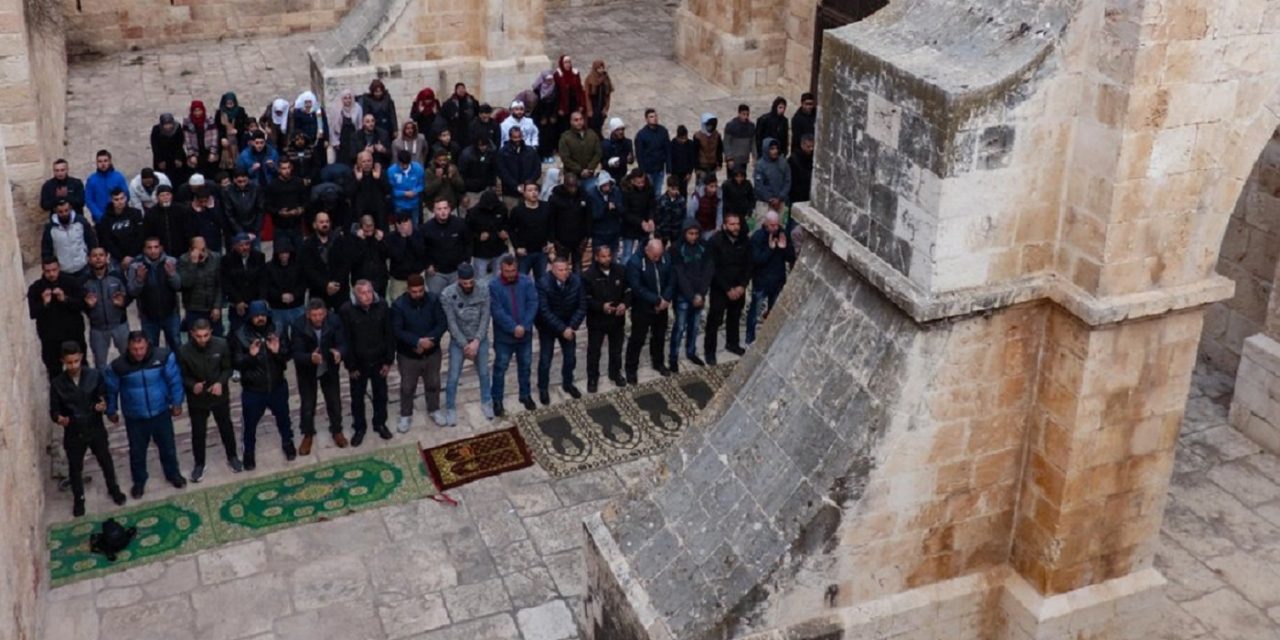 Tensions have surged at the Temple Mount after the closed “Gate of Mercy”, also known as “Golden Gate”, was broken through by Palestinian protesters and certified as a mosque.

It follows the breaching of the site, also known as the “Golden Gate” or “Eastern Gate”, was followed by thousands of Muslim praying there last Friday.

However, Israeli government officials said that Israeli Prime Minister Benjamin Netanyahu issued an order to remove equipment from the site and disallow prayer there.

The structure was recently fitted with rugs and other furnishings along with renovations. Eran Tzidkiyahu of the Forum for Regional Thinking visited the site on Monday and assessed that it would soon be used as a permanent prayer area for Muslims.

Meanwhile, the Islamic authority that oversees Muslim holy sites in Jerusalem, known as the Waqf, announced it has already appointed an imam for the “Gate of Mercy” structure and that its status would be identical to other sites of worship on the Temple Mount.

Israeli police on Sunday arrested the head of Waqf authority, Sheikh Abdelazeem Salhab, and other Waqf leaders, following violent Palestinian protests last week on the Temple Mount. Salhab, who was released shortly after his arrest and barred from the area for one week, was appointed by neighbouring Jordan.

The Arab protesters shouted incitement against Jews and breached the area, which has been closed off for the past 16 years.

Ismail Haniyeh, a Hamas leader, called on Palestinian Authority Arabs to march to Al-Aqsa mosque and to arrive there from all parts of “Palestine.”

Riots started in #Jerusalem at the Temple Mount and the Golden Gate (Gate of mercy). Reports of 6000 thousands palestinians at both sites chanting "Death to #Israel" and "Allah Wakbar". @IL_police on site. pic.twitter.com/wDvU4o45vs

From One mosque to five

Unless the situation changes, the number of mosques at the Temple Mount compound will stand at five.

Some 52 years ago, immediately following the Six-Day War, there was only one mosque, Al-Aqsa mosque. Over time, the Dome of the Rock was also certified as a mosque and mostly serves Muslim women on Fridays. In the 1990s, two other mosques were certified, but underground: the “Gate of Mercy” area, which some Muslims in recent days have hailed as the “fifth mosque,” was shut down by Israel in 2005 after a Hamas-linked group carried out activities there.

The new Waqf leadership, comprising officials from Fatah, the Palestinian Authority, Hamas and the Muslim Brotherhood, breached the site around two weeks ago, and last Friday thousands of worshippers prayed there. Waqf leaders arrested by Israel, as stated, were released a short while later on shaky legal grounds, as the aforementioned Hamas-affiliated group that had operated there, and which served as the pretext for shutting the site down, no longer exists, and doubts emerged over the legality of the most recent closure order.

It should be noted that before 2005, although the compound was controlled by the Muslims it didn’t function as a mosque and people normally didn’t use it for worship.

Senior Arab-Israeli figures, among them the head of the High Follow-Up Committee for Arab citizens of Israel, former Knesset member Mohammad Barakeh, together with representatives of the Balad and Ra’am parties, visited the structure on Monday and met with Waqf leaders.

“It is the right of every Muslim to prayer at Al-Aqsa mosque. The actions of the Israeli government to Judaize Jerusalem and erode the status quo at Al-Aqsa will be met with strong resistance,” they threatened.

An Israeli government official said: “The prime minister gave instructions to enforce the court’s order without compromise. The political echelon won’t allow the site to become a mosque. This directive was passed to the police and this message was delivered to certain authorities and to Jordan as well. The prime minister has instructed the public security minister [Gilad Erdan] to remove the rugs and other equipment from the site.”