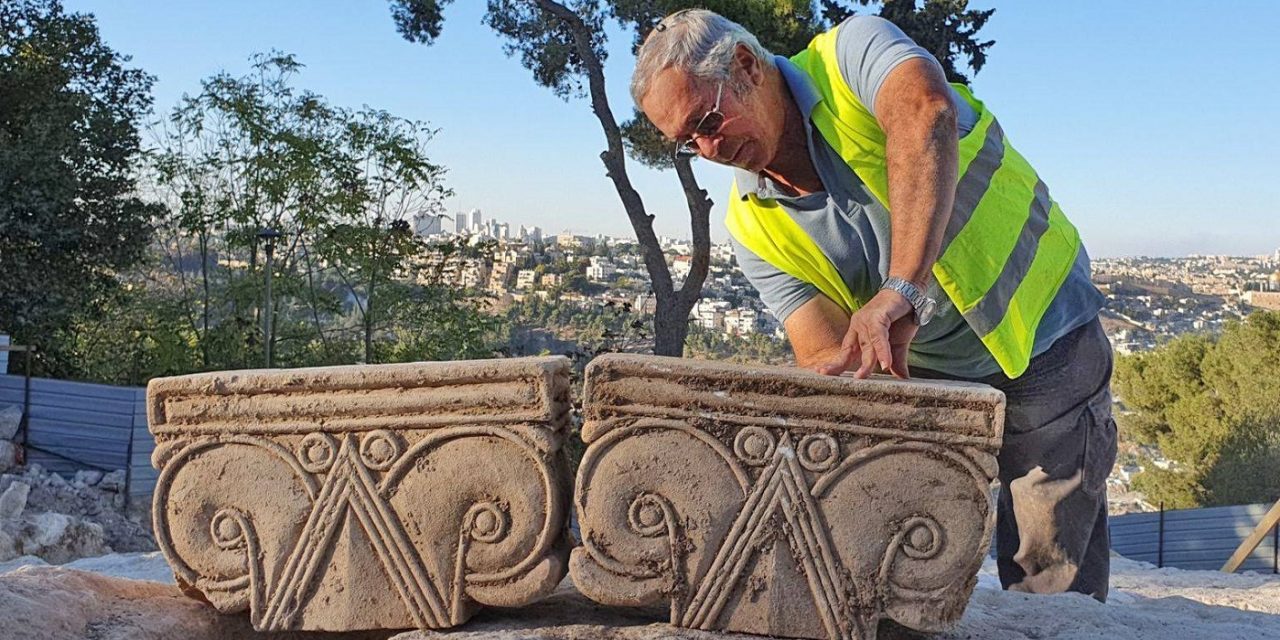 Archaeologists in Jerusalem have uncovered majestic column heads from a First-Temple-era palace linked to the Davidic dynasty in what has been described by experts as possibly the most important discovery of the decade.

The find at the Armon Hanatziv promenade in the City of David include three complete medium-sized stone capitals and items from lavish window frames dated between the reigns of kings Hezekiah and Josiah. The royal designs are familiar to Israelis as they appear on the five-shekel coin of the modern State of Israel in tribute to the First Temple era.

Archaeologists involved in the discovery said, “The column capitals, identified with royal construction of the First Temple period, are the most beautiful and impressive that have been uncovered to date”

The Bible comes to life as Host Erick Stakelbeck interviews Ze'ev Orenstein of the City of David about a major new archaeological discovery in Jerusalem — just announced on September 3rd, 2020 — that dates back to the First Temple Period between the rule of King Hezekiah and King Josiah some 2,700 years ago.#Archaeology #CityOfDavid #BiblicalThe Watchman Show is LIVE Thursdays 9PM ET on TBN

Posted by Christians United for Israel (CUFI) on Thursday, 3 September 2020

The Times of Israel reports that the owner of the lavish Jerusalem mansion — which would have enjoyed a monumental view of the Old City and the Temple — remains a mystery, but archaeologists were able to date the finds back to the era of the Judean kings, due to the proto-Aeolic features – one of the most significant royal building features of the soft limestone architecture.

“This is a very exciting discovery,” said Yaakov Billig, of the Israel Antiquities Authority. “This is a first-time discovery of scaled-down models of the giant proto-Aeolian capitals, of the kind found thus far in the Kingdoms of Judah and Israel, where they were incorporated above the royal palace gates. The level of workmanship on these capitals is the best seen to date, and the degree of preservation of the items is rare.”

Experts believe the residence was built between the reigns of kings Hezekiah and Josiah, after the Assyrian siege on the city was lifted. Residents of Jerusalem then ventured outside the walled City of David and expanded the city, said Billig.

“This find, alongside the palace that was found in the past at Ramat Rachel and the administrative center found on the slopes of Arnona attest to a revival of the city and leaving the walled areas of the First Temple era after the Assyrian siege,” which ended in 701 BCE, he said.

“We find villas, mansions, and government buildings in the unwalled areas outside the city and this attests to the relief felt by the residents of the city after the siege was lifted.”

The three columns and other remnants of the building are on display at the City of David archaeological center.

History in the making – close-up photos of possibly the most important discovery of the decade!The stone artifacts…

Posted by City of David Ancient Jerusalem on Thursday, 3 September 2020