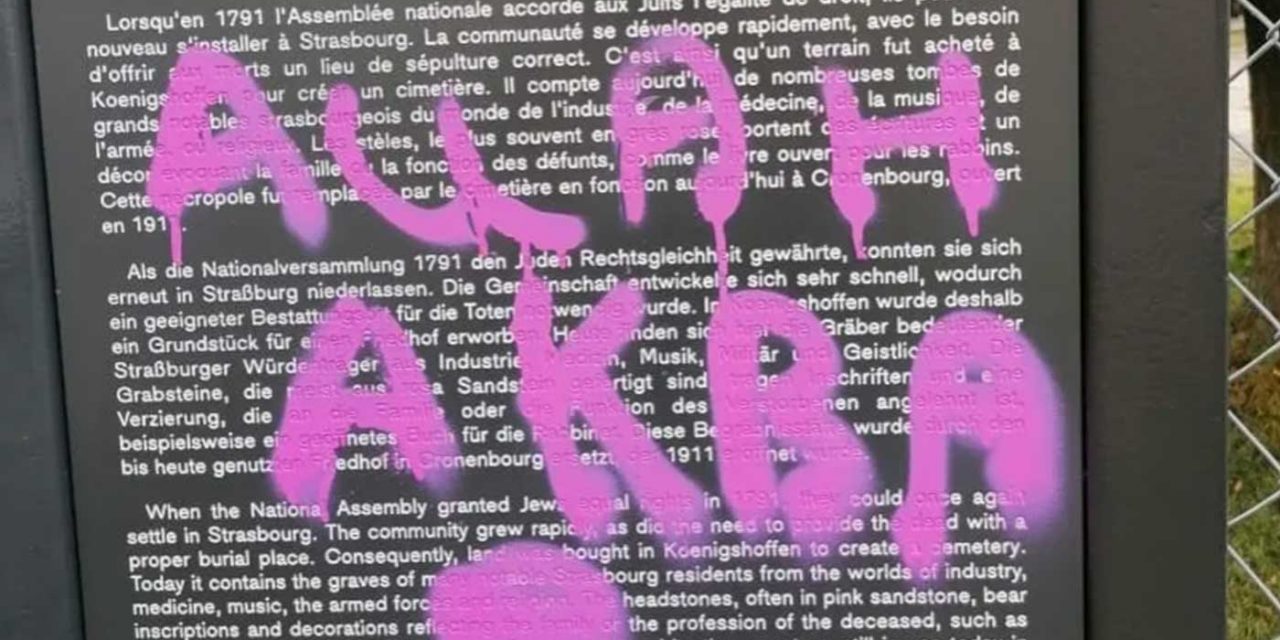 A Jewish cemetery was targeted by an act of anti-Semitism recently when “Allah Akbar” was daubed on a sign at its entrance.

The incident took place in Strasbourg, France around the 11th June.

The act has been condemned by the Regional Council of Muslim Worship (CRCM) which said, “To use the name of God in any language to degrade a cemetery… is infamy and heresy.”

Sadly, we have seen a rise of anti-Semitism in France in relation to the Muslim community. This includes high profile cases such as the Charlie Hebdo attacks, which also resulted in a Jewish supermarket being targeted by Islamic terrorists, as well as the murder of Sarah Halimi who was killed by her Muslim neighbour who shouted “Allah Akbar” and had previously made anti-Semitic comments to Halami and her daughter.

The video above details how there is a double effect taking place in France. The Jewish community in France is reducing each year as record numbers leave the country to emigrate to Israel. With smaller numbers in the country they are becoming more vulnerable as a community. In addition, Jewish children are being moved at increasing levels from public schools and instead being placed in both Jewish and Christian schools where they are much less likely to face abuse.

There have been instances of single Jewish children being in public school classes and as a result facing discrimination from their piers.

In 2017, a 10-year-old Jewish girl required hospital treatment after she was subjected to regular beatings and anti-Semitic abuse by her Muslim classmates at a public school in Paris. Despite being aware of the situation, the school did nothing. It is actions like this that caused thousands of Jewish parents to take action to protect their children because the state won’t help them.

The difference between the Muslim community in the UK and in France was also highlighted in 2018.

Fiyaz Mughal, of the Muslims Against Anti-Semitism initiative, had successfully brought Jewish and Muslim leaders together in Britain to sign a pledge against anti-Semitism. When he took the initiative to France, he found a very different response.

“This was not the case in France, and what I found were deep divisions and a deep politicization on the most basic issue of standing for the ‘other.’ I had to change the text and redraft, and with very few responses back and with suggestions that Muslims would not just want to be associated with tackling anti-Semitism alone,” he said in a statement to The Times of Israel.

“I mean just for a moment think about this. It was impossible to get signatories together to stand squarely against anti-Semitism, which is the oldest historic hatred,” said Mughaz.

No French Muslim leaders were ultimately willing to sign the pledge.

We have heard political pledges from French leaders in recent years to tackle anti-Semitism, but there has been little change. We pray for the situation to turn around in France, but there is a real need for reform.