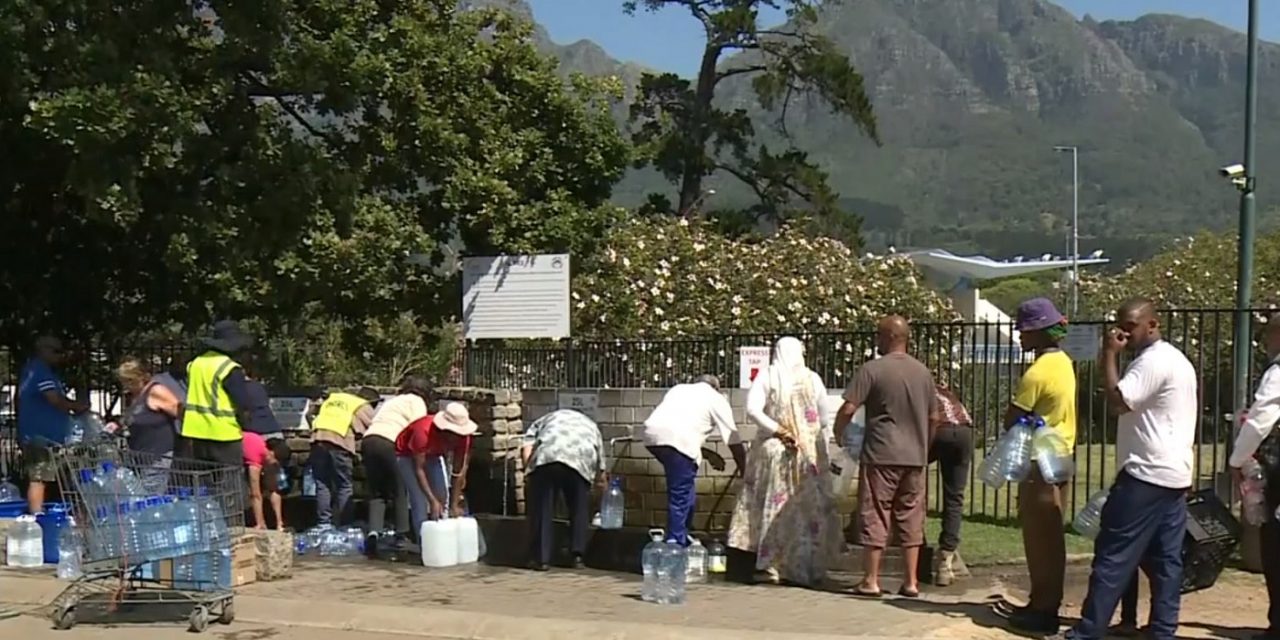 Within three months, South Africa’s capital city may become the first major city in the world to run out of water, two years after rejecting Israel’s help.

The four million residents of Cape Town will have their water supplies cut off unless the city manages to reduce daily consumption by 20 percent. The “Day Zero” shutdown is currently expected for 4th June 2018 and is recalculated every week based on current reservoir capacity and daily consumption. Residents are currently being advised to limit usage to 50 Litres per day.

Astonishingly, in February 2016 a decision was made by South African government to cancel a water conference that was scheduled to take place in Johannesburg. BDS South Africa said at the time it was pleased “the rug has been pulled from the Israeli ambassador, who will not be able to exploit our very serious water crises for his own cheap publicity and whitewashing of his regime. Israel water technology is not unique or special; such technology is widely available through other more friendly countries.”

The crisis is mostly attributed to three years of unprecedented drought that has dried up the city’s six-dam reservoir system. If the dams fall below 13.5% capacity before the start of the rainy season in June, taps will be turned off and residents will have to line up at municipal points to collect their allotted 25 liters per day. This amount is about a quarter of the water used by the average American daily.

If, two years ago, or even earlier, South Africa had put aside its boycott of Israel, it could have possibly avoided “Day Zero”.

From its inception, Israel has had to build its nation without abundant water or energy. Despite its arid climate, fast-growing population, and history of droughts, Israel today experiences a water surplus.

Israel’s use of innovative irrigation, desalination, wastewater recycling and reuse, and leak-detection technology has been credited with helping the country become a water superpower. It is the extent to which these innovations have been implemented that sets Israel apart, rather than the technology itself.

Israel has been sharing its know-how in the field of water with a number developing countries in Asia and Africa. But even more technologically advanced countries have learned from Israel.

For instance, California has collaborated with Israel to cope better with its ongoing drought. Israel has helped to build a desalination plant in Carlsbad, a city about 50 kilometers north of San Diego.

Currently more than 150 countries actively use Israeli solutions – whether technology, training, or technical assistance – to help address their water problems. Despite offers of assistance years ago and more recently by Israeli Ambassador to South Africa Lior Keinan, there has been no formal engagement between Israel and South Africa regarding the looming water crisis.

However, the South Africa-based Legacy Water Solutions management consulting company is actively considering various Israeli companies with which to partner.

The Jerusalem Post article says, “South Africa, in contrast, has stubbornly boycotted Israel, out of solidarity with the Palestinian cause. Ties between Hamas and Africa’s ruling party, the African National Congress, are good. Hamas participated in the ANC’s 54th National Conference that took place in Johannesburg in December. During that conference the ANC decided to downgrade the status of the South African Embassy in Israel.”

“South Africa embraces a terrorist organization that presides over a strip of land populated by nearly 2 million that is on the verge of a humanitarian crisis due to its own misguided policies. It boycotts Israel, a nation with innovative technologies, a thriving economy and democratic rule. South Africans, meanwhile, face a water crisis that might have been avoided had the ANC made decisions based not on bluster and distorted comparisons between Apartheid and the Israeli-Palestinian conflict, but on pragmatism, justice and the interests of the South African people.”