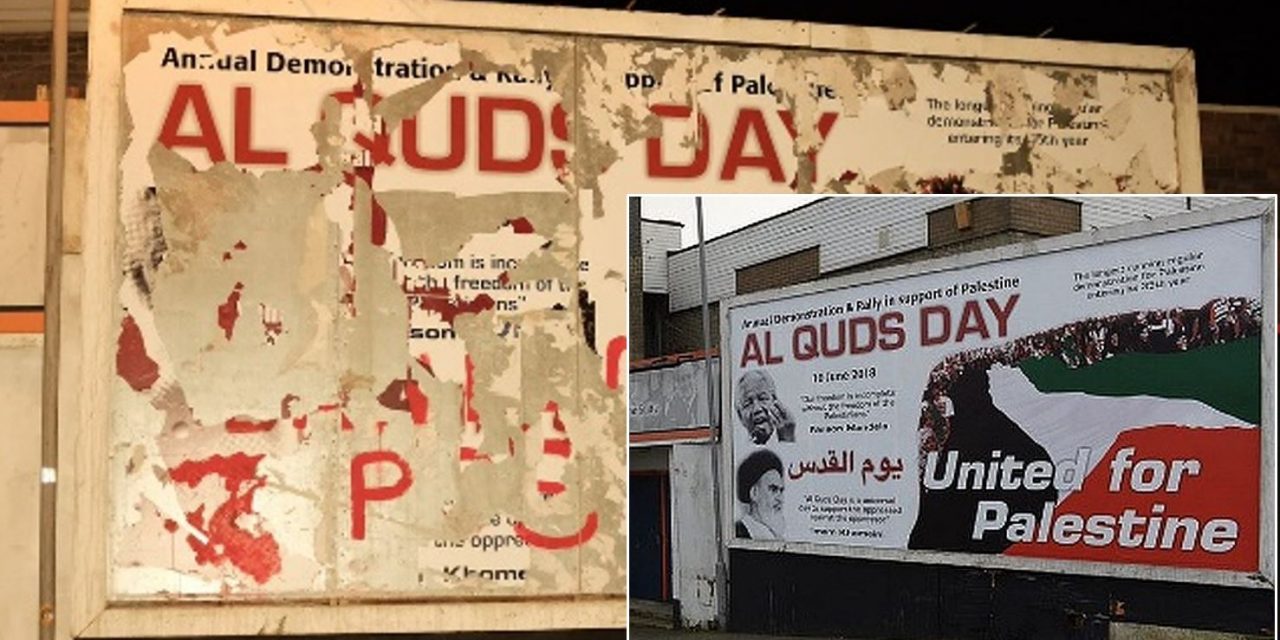 A billboard in Luton advertising the antisemitic al-Quds day has been removed.

Although al-Quds day, which means “Jerusalem Day” in Arabic, is not until June, Luton is apparently already making plans to celebrate the Iranian ‘holiday’ of “Al Quds Day’. Specifically, the billboard located opposite Luton’s football stadium, advertises an “annual demonstration and rally in support of Palestine.”

Before the billboard was removed, former head of the British Armed Forces in Afghanistan, Colonel Richard Kemp, tweeted: “This billboard is in the English town of Luton today. Featuring a large image of Ayatollah Khomeini is like having posters of Adolf Hitler up in Britain during the 2nd World War. The town should have this disgraceful provocation removed.”

The advertisement promoted, “The largest running regular demonstration for Palestine entering its 35th year.”
Quoting Nelson Mandela, it also reads, “Our freedom is incomplete without the freedom of Palestinians,” and quotes “Imam Khomeini,” as saying “Al Quds Day is a universal day to support the oppressed against the oppressor.”

Al Quds day means “Jerusalem Day” in Arabic. It is an annual event initiated by Iran in 1979 to express support for the Palestinians and oppose Zionism and Israel’s existence as well as Israel’s control of Jerusalem. Rallies are held throughout the world, especially the Middle East, on the last Friday of Ramadan. This year Al Quds Day is on 10 June, however the London march usually earlier.

A tweet on Tuesday, however, shows the poster has been removed.

Good to see @lutoncouncil @JCDecaux_UK will not tolerate #IHRC import of foreign hate wars onto our #UK streets, creating division & hate in our communities. pic.twitter.com/5qbui7yKkC