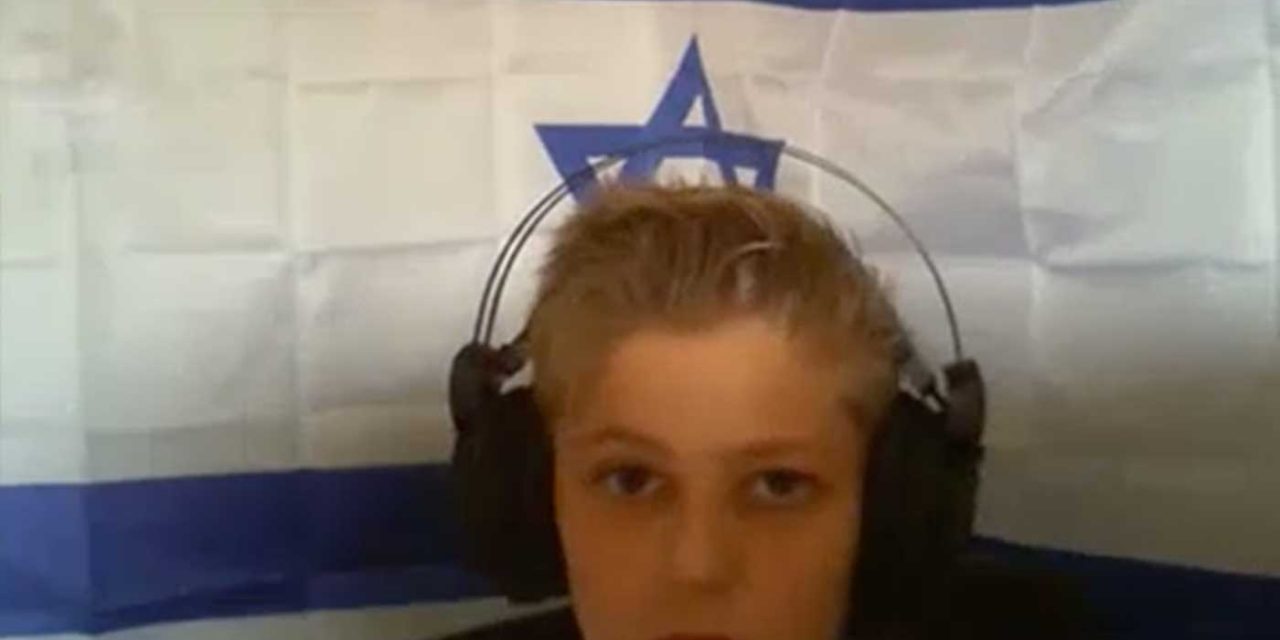 A 12-year-old schoolboy has been kicked out of his online school class after he refused to take down his Israel flag or turn off his video.

Two teachers were said to have taken exception to the flag, with both telling him it was “unacceptable”. One of those teachers ended up kicking him out of the class despite other children in the same video class displaying flags of their own from other countries.

A story in the South Africa Jewish Report explains:

Lange is in Grade 7 at Pinnacle College in Linden, Johannesburg. In an online recording of one class, we see him sitting with the flag behind him. The teacher asks him to take it down. “I see nothing wrong with it,” says Lange. The teacher tells him, “It’s not going to be acceptable to other people from other cultures and races. So, it’s fine for you, and that’s fine. But it’s not so okay for other people. I need to ask you please not to display it like that.”

In another class, the teacher sees it, and tells him, “You are showing that you aren’t sympathetic to others’ feelings and thoughts. So if you can, please, in my lesson, take the flag down, I would really appreciate that. I would feel like you are respecting me and my thoughts and feelings. I understand you have freedom of speech, thought, and feelings, but we have to do that in a respectful way.”

When he doesn’t turn off his screen, she kicks him out of the class with the click of a button. “That solved that issue. If he cannot respect us or respect anyone else’s thoughts and feelings, he will not be a part of this meeting,” she says while Lange is offline.

Another pupil, who had the Danish flag in the background, said to the teacher, “No one’s being offended by a Danish flag. Why do they have to be offended by the Israeli flag? It’s his bedroom – he’s allowed to have what he wants on the wall.”

“The thing is, you can’t expect people to react to all kinds of nationalities and all kinds of people,” responds the teacher. “I’m all for diversity. I’m all for acceptance. But you cannot tell anyone that what they are feeling is wrong.”

“But then it’s both ways,” says the pupil. However, the teacher doesn’t agree. Speaking to the SA Jewish Report, the pupil says she stood up for Lange because, “I was really angry. I felt it was wrong that Luke was being isolated like that. Everyone should be treated equally and with respect.”

Lange told the SA Jewish Report, “I didn’t expect anyone to care [about the flag]. It’s a normal flag. I never expected that from a teacher, especially when she removed me or said I wasn’t ‘sensitive enough’ to what others wanted. I felt like I was being oppressed and said so in the Zoom chat. That’s when I was removed from the class.”

At the same time, he felt empowered by sticking to his convictions, and knew that he had the right to freedom of expression. In fact, his school’s code of conduct says this explicitly. It also says, “Any distinction, exclusion, limitation, or preference made by a person in an authoritative position who uses unfair grounds to distinguish, exclude, limit, or prefer certain persons for any role or activity or benefit is prohibited.”

Lange is on school holidays, and is unsure how he will be treated on his return to school. “I stood up for myself so that other kids don’t feel scared to express themselves,” he says. To the South African Jewish community, he says, “Stand up for your rights – your right to support Israel and be proud, your free speech, and freedom of religion.”

Lange’s father, Frederick Lange, says it has been hard to watch his son be treated this way, but he’s proud of him. “Children should have a voice. Other pupils at the school are able to express themselves in the religious clothes they wear. Just recently, tests were postponed because of a religious holiday. But it seems like no one else counts – and that has a terrible effect on a child. It’s supposed to be a safe environment. He’s so strong in his beliefs, but I’m worried about the impact of this experience, especially when the teacher kicked him out and then discussed him with the class, and he wasn’t there to defend himself.”

Speaking to the SA Jewish Report as a parent of one of the children in the class, and as project manager at the Institute of Race Relations, Terence Corrigan says, “I have nothing but the highest regard for the school and its staff. But as both a parent and a professional political analyst, I find the manner in which this was handled concerning.

“There’s a principle here,” he says. “It sends a message that offence is enough to shut someone down. Is this really what we want to communicate to our children in a world where they are never going to be able to avoid wildly divergent views?

“Ultimately, it’s about consistency,” he says. “You can’t accept some forms of politics but not others – for example, Black Lives Matter but not Israel. Either it must all be restricted, or you allow a wide, even-handed berth.”

Advocate Mark Oppenheimer, who has an interest in constitutional law, notes that, “The underlying premise of the teacher’s position is that people’s feelings cannot be questioned and that the best way to respect people’s feelings is through censorship, warding off anything that could make anyone uncomfortable. She claims to respect free speech while at the same time demanding that the student remove his camera and block the background, which would, of course, not be respecting his right to free speech. It might be sufficient to protect his right to private property – in the sense that he’s free to have the flag up in his room – but his expression requirement is that he can express that image to others, and she’s intruding on that right.

“The situation in which the other child raises the Danish flag is an excellent example of reductio ad absurdum,” Oppenheimer says. “In other words, she takes the teacher’s position and reduces it to the absurd. Her actions say, ‘I have put up a flag of another nation, which also has a religious symbol on it [a cross], and if you think that I should be free to have this image up but that he shouldn’t be free to have the Star of David in his background, then there’s a problem.’”

Oppenheimer says there are double standards at play, and “if you indulge feelings as a reason for censoring, then it’s very hard to put the genie back in the bottle”.

Mike Aitken, the managing director of ADvTECH schools (which includes Pinnacle College Linden), says, “Our review of this incident is ongoing, and includes discipline considerations, coaching, support, and education/training.

“When viewed in isolation, the video doesn’t reflect all relevant events surrounding this incident or align with how we would have wanted this [to be] managed. We are taking action to ensure that our staff are better empowered to deal with situations in online classes that trigger this sort of response. Unfortunately, school holidays and responses since the event have detracted from us using this as a teaching moment as emotions became heated very quickly, and some associated and consequent conduct wasn’t aligned with our values.

“We unequivocally accept Luke’s right to have the Israeli flag,” he says. “We equally understand that for some students, its symbolism is triggering and traumatising, and their rights are as important. As an inclusive South African school, we rely on temperance from everyone as we learn together what a respectful and diverse world can be like.

“We prefer not to have any religious or political symbolism on display in our classes as this can detract from the scheduled teaching and learning process. That being said, we expect this preference and situation to be managed collaboratively and compassionately. We always remain willing to facilitate respectful discussions between students on potentially emotive topics, but prefer these be handled in a planned and managed way so as to derive the greatest understanding and benefit for all parties involved.”