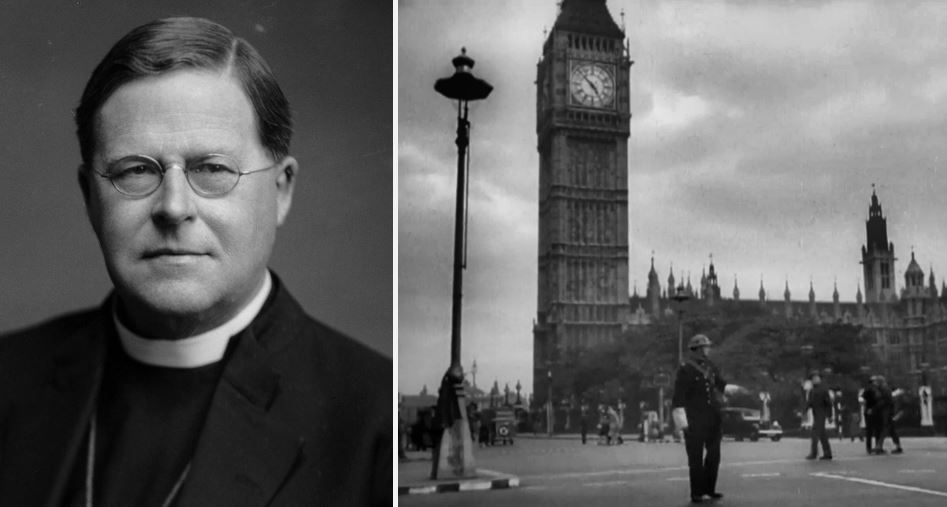 “We at this moment have upon us a tremendous responsibility. We stand at the bar of history, of humanity and of God.'”

On 23 March 1943, the Archbishop of Canterbury, Lord William Temple, spoke up passionately in the House of Lords against the “massacres and starvation” of Jews by the Nazis, arguing for their protection to be made a priority.

“We are confronted, as all your Lordships know, with an evil the magnitude and horror of which it is impossible to describe in words,” he declared.

Temple continued to explain reports of what was happening in Europe before comparing Allied leaders with the priest and the Levite in one of Jesus’s parables:

“My chief protest is against procrastination of any kind…We know that what we can do is small compared with the magnitude of the problem, but we cannot rest so long as there is any sense among us that we are not doing all that might be done. We have discussed the matter on the footing that we are not responsible for this great evil, that the burden lies on others, but it is always true that the obligations of decent men are decided for them by contingencies which they did not themselves create and very largely by the action of wicked men. The priest and the Levite in the parable were not in the least responsible for the traveller’s wounds as he lay there by the roadside and no doubt they had many other pressing things to attend to, but they stand as the picture of those who are condemned for neglecting the opportunity of showing mercy. We at this moment have upon us a tremendous responsibility. We stand at the bar of history, of humanity and of God.”

Temple died a year and half later, on 26 October 1944. He never got to witness the end of the war or the liberation of the Nazi death camps, however his words in Parliament on that day had a profound impact that today bears testimony of his resolve to support the Jewish people.

Last week in Parliament, bold MPs on both sides of the House spoke out against antisemitism perpetrated by the terror organisation Hezbollah – a radical Islamic group that has called for the annihilation of Jews both in Israel and around the world. Until the Government changes its policy, CUFI will continue to call for a complete ban on Hezbollah.

Britain must not neglect its responsibility to condemn antisemitism and to act.

At Christians United for Israel, we believe that the church in Britain must take a leading role once again against the evil of antisemitism. It should also be setting an example of opposing antisemitism in all its forms. Sadly the church in Britain hasn’t always stood with the Jewish people as it should have. This is why last week we announced that CUFI has approached church denominations and affiliations in the UK, including the Church of England, Baptist Union, Methodist Church and Evangelical Alliance, calling for them to adopt the International Definition of Antisemitism.

The definition, which has been adopted by the UK Government and London Assembly, will provide the Church with the framework to identify and prevent antisemitism. It will also send a positive and reassuring message to the Jewish community that the Church in the United Kingdom is willing to take a leading role in countering antisemitism.

Antisemitism, like all prejudices and hatred, goes against the core of our Christian values. But further to this, we at Christians United for Israel believe that as Christians we have a Biblical responsibility to stand with the Jewish people. Archbishop Temple recognised this.

In the words of Archbishop Temple, “We at this moment have upon us a tremendous responsibility. We stand at the bar of history, of humanity and of God.”

Today, the Church has a tremendous opportunity and we pray that it will embrace it.

For a transcript of Archbishop Temple’s full speech, click here