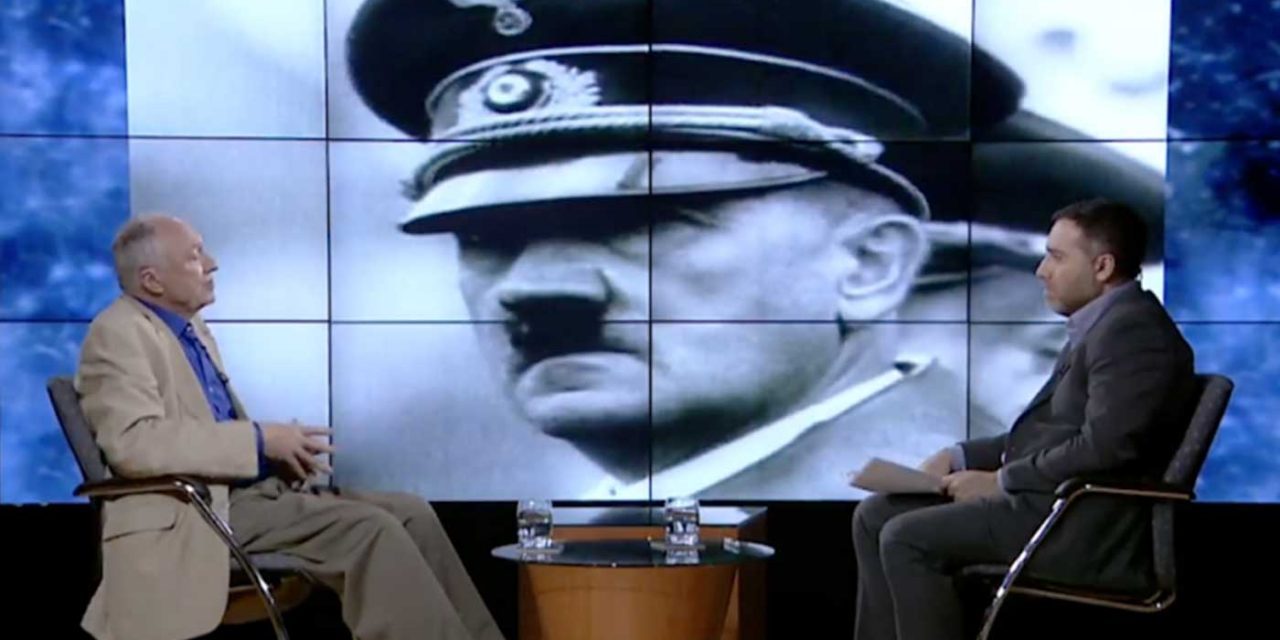 Many people marked Holocaust Memorial Day by having a silent moment in memory of all those murdered in the Holocaust. Former Mayor of London, Ken Livingstone, who is currently suspended by the Labour Party due to allegations of antisemitism, decided it would be good to mark the day by appearing on Iranian TV channel Press TV to discuss, “Has the Holocaust been exploited to oppress others?”

The segment begins by explaining loosely what happened during the Holocaust, but then moves on to talking about the creation of Israel and how some argue that the memory of the Holocaust has been exploited to deflect criticism away from “Zionist crimes”.

The programme claimed, “The Holocaust directly lead to the creation of Israel in 1948 as hundreds-of-thousands of Jews fled persecution in Europe” and then makes the outrageous claim that “the land of the Palestinians was stolen and ethnically cleansed.”

With views like this, it is no wonder Press TV was banned from UK. And still a mystery why Ken Livingstone decided to be on the programme.

During the programme the presenter and Ken took calls. The presenter asked one caller, “Has the Holocaust been used to oppress others”?

The man from Michigan replied “Yes” saying he believed “no one has paid the price for the Holocaust industry that has been overhyped more than the Palestinians”. The caller went on to say “the Israelis use the Holocaust to silence criticism of the way they treat Palestinians”.

Within all of this they are implying that it is the Jews who are the ones doing the exploiting. A claim often made by antisemites. “They are using their dead to kill others” is the thought behind it. This horrific view is unjustified and wrong. Israel is not “killing the Palestinians”. But to claim that Israel is exploiting the memory of their own dead relatives to do so is deplorable.

Fortunately, Ken did not agree that the Holocaust was being exploited, however, the show did conclude that it was.

In the discussion, Ken had a chance to defend himself from the allegations of antisemitism.

Ken claimed that he was not anti-Semitic saying he couldn’t walk down the street without a Jewish person agreeing with him:

“When I was suspended by the Labour Party bureaucracy, I couldn’t walk down the street without Jewish people coming up to me and saying, ‘we know what you said is true, what is this all about, don’t these MPs read their history?’.”

He claimed that those criticising him were doing it for political means and the host spoke of the “Zionist lobby” who had tried to get him fired.

“Very often these accusations bear nothing to do with anti-Semitism, it’s about political struggle”, Ken said.

Well, it appears Ken Livingstone has done a number of times. This whole controversy came about when he was defending Labour MP Naz Shah’s anti-Semitic comments on social media. Ken came to Shah’s defence by saying, Hitler “was supporting Zionism”.

The definition of “Zionist” is “a supporter of Zionism”. So to say Hitler “was supporting Zionism” is the same as saying “Hitler was a Zionist”. But Ken still doesn’t get it.

On top of this, Ken has previously claimed that “right up until the start of World War II you had real collaboration” between Hitler and the Zionists. He also claimed that Hitler “supported Zionism” before he “went mad”.

Hitler himself disputes this. In Hitler’s book Mein Kampf he clearly lays out his feelings of the Jews, and includes his thoughts about Zionists which are as follows:

“While the Zionists try to make the rest of the World believe that the national consciousness of the Jew finds its satisfaction in the creation of a Palestinian state, the Jews again slyly dupe the dumb Goyim. It doesn’t even enter their heads to build up a Jewish state in Palestine for the purpose of living there; all they want is a central organisation for their international world swindler, endowed with its own sovereign rights and removed from the intervention of other states: a haven for convicted scoundrels and a university for budding crooks.”

Just to clarify, the above paragraph was written by Adolf Hitler in 1925, years before he supposedly “supported Zionism” and before he “went mad”, as Ken put it. Clearly these are not the words of a Zionist.

David Baddiel, who is in no way a supporter of Israel, summed up exactly what the problem is with Ken’s views on Hitler and Zionism.

“The real problem, in a way, is the tone of Livingstone when giving this interpretation. There’s no sympathy. No compassion – no sense of the tragedy behind this. It’s just complacently presented as a deal that Hitler made with German Zionists, and therefore – and this, of course, is the point, the banal, **** point – a way of confirming that Zionism is bad. Through an association with the top bad thing, Hitler.”

These are important points. Many people have deemed Ken’s comments to be anti-Semitic, not because of whether they are factually true or not (which they are not), but it is because he seems to lack all sympathy for the victims of the Holocaust when he says them. This is concerning to say the least.

There is a complete lack of sympathy towards the plight of the Jews in the lead up to and during the Holocaust. If some Jewish leaders sought to save lives by having them be relocated to Palestine, can you blame them?

And if Hitler did actually agree to this, it should not be interpreted as Hitler “supporting Zionism”. Hitler always wanted to rid the world of Jews, or at least wanted to rid Germany and his empire of them. However, he did not always think that he could get away with the mass murder of them.

If there was collaboration between Hitler and Jewish leaders at the time you can guarantee that they were not doing it out of mutual respect or understanding and we should always remember that the Jews of that time were under extreme persecution and may have felt like the had no other choice.

This is why Ken’s repeated claims are so hurtful, both to Jews and Zionists.

Beneath all of it, however, is Ken’s distain for Zionism as a whole. The movement he is involved in has long sought to equate ‘Zionism’ as the worst of all movements. We heard it when the United Nations voted that “Zionism is Racism” we see it when anti-Israel protesters hold signs saying “Zionism is Nazism” and so forth.

If Ken truly cared about the Jewish people, many of whom do feel offended by his words, then he should apologise. He can’t do that, however, because his pride is worth more to him than his concern for the Jewish people and his hatred of Zionism burns stronger than his love for Jews.