Remembering the sacrifice in Sinai and Palestine during World War One 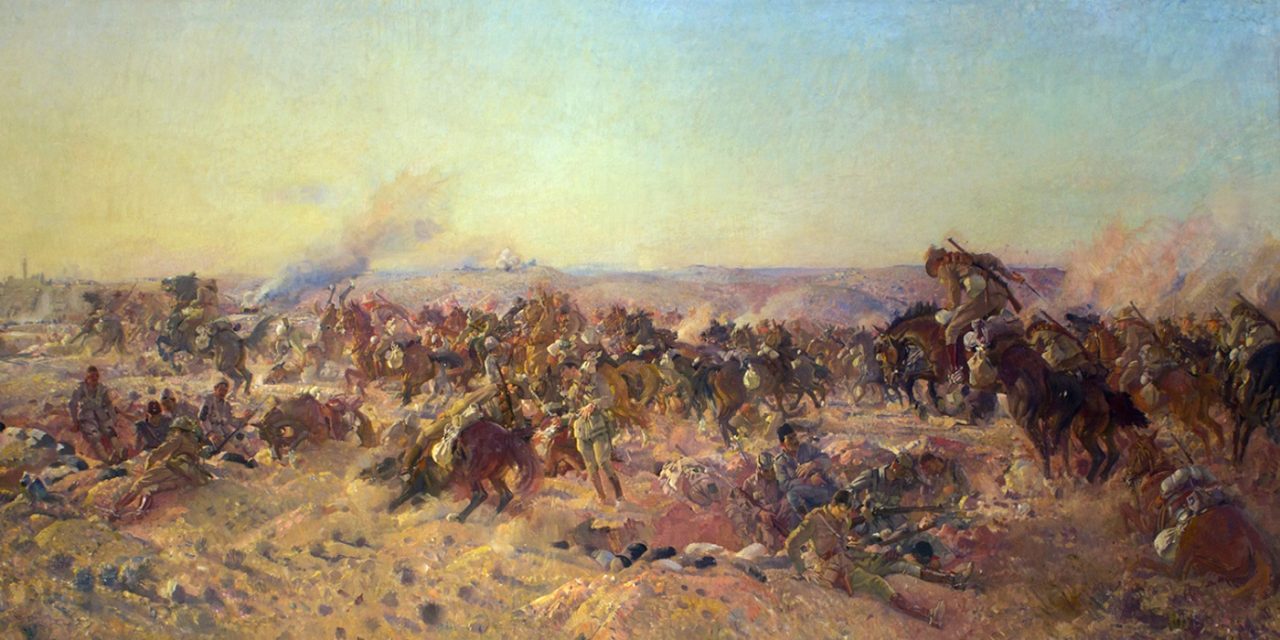 On Sunday we remember the 100th anniversary of the end of the First World War. We honour those British and Commonwealth soldiers that made the ultimate sacrifice, as well as remember service men and women of our Armed Forces in World War 2, and conflicts since, who laid down their lives to protect our freedoms.

Please see our special letter about why we at CUFI UK will be wearing our poppies this week and on Sunday and the importance of defending these freedoms today. Click here to read.

In December 1917, one year before the end of WW1, British and Anzac forces led the way in driving the Turks and German forces out of the Holy Land, bringing an end to 400 years of Ottoman occupation of Jerusalem.

In the Negev, in early 1917, 16,000 British troops and soldiers of the Australia and New Zealand Army Corps (Anzac) were killed or wounded in battles for Gaza. These attempts failed, despite the fact that the British used tanks and gas shells for the very first time.

The tide turned when General Sir Edmund Allenby took command and decided to change strategy by gaining control by way of Beersheba, the Turks’ most important military centre in the region at that time.

Allenby developed a plan to trick the Turks into thinking that the British would attempt a third Gaza attack, while in reality Gaza was only to be a diversion so that the troops could more easily enter Beersheba. Called the Haversack Ruse, it involved sending a mounted intelligence officer across Turkish lines hoping that the Turks would shoot at him, he would pretend to be wounded, and he would “accidentally” drop a haversack full of letters describing false plans for a massive attack on Gaza.

Incredibly, the first two times the pack was dropped no one picked it up and the charade had to be repeated a third time. As a result there were fewer Turkish soldiers in Beersheba on the day of the attack than there otherwise might have been. The British lost 171 troops, the Ottomans, 1000.

It was on the same day as the Battle of Beersheba that the Balfour Declaration was ratified by the UK Parliament.

British-Anzac victories in the Negev paved the way for an eventual surrender of Jerusalem six weeks later on the eve of Hanukkah 1917.

These three events would pave the way to the eventual establishment of the State of Israel.

Further to Britain’s own political interests in the Mideast, Britain also recognised the need for the Jewish people to have a national home of their own in the land of Israel. You may recall that General Allenby entered Jerusalem through the Jaffa Gate on foot rather than on horseback, out of respect for the Holy City. Allenby’s procession along Jaffa Road was met with great fanfare and jubilation.

Allenby dismounted, then walked humbly through the gate built by Suleiman the Magnificent in 1538. That way he could avoid the wide entrance cut through the walls in 1898 to allow Kaiser Wilhelm of Germany and his flamboyant entourage to ride through with pomp and ceremony. General Allenby respected the Holy City of Jerusalem and we want Britain to do the same today.

Britain may not always have been a faithful ally of Israel, but let us remember the tremendous way in which Britain and its allies were used by God to fulfil His providential plan for the rebirth of Israel and the sacrifice that was made to restore it as a homeland for the Jewish people.

For the entire campaign in the Sinai and Palestine, 17,000 British Empire soldiers were killed, 44,000 wounded, and more than 100,000 were evacuated with sickness.

In our efforts to defend Israel and recognise Jerusalem as its capital, we know that there is a battle for Jerusalem that is neither that of “flesh or blood”. Yet our convictions align with that of Britain’s leaders 100 years ago: the land of Israel is worth fighting for. Jerusalem is worthy of our honour and must be still be defended today.

This article is from the CUFI Prayer Network. For more information and to join, click here