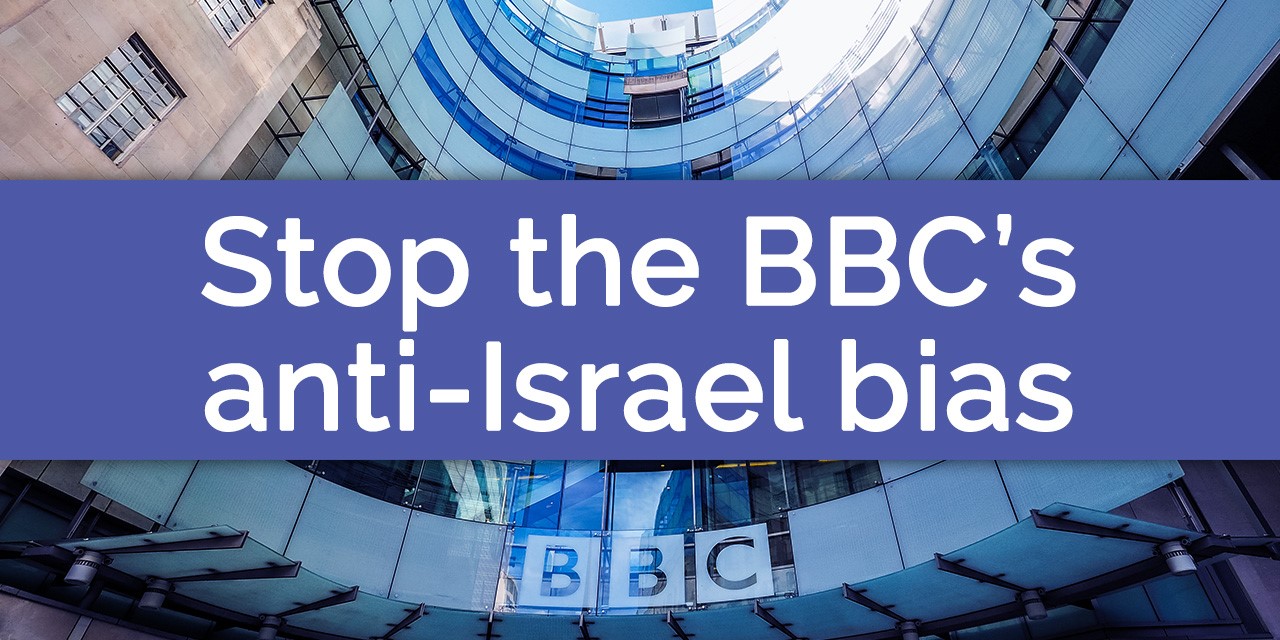 It’s time to make our voices heard about the appalling bias against Israel at the BBC.

For too long, our national broadcaster, funded by the British public, has failed in its coverage of Israel. This unbalanced reporting is leading people to the wrong conclusions about what is happening in the Middle East. The BBC is failing, deliberately in our opinion, to “inform and educate”, leading many people to the wrong conclusion about the threat Israel faces and how it responds. Furthermore its biased reporting is fuelling antisemitic discourse in the UK.

This is why we have decided, alongside our campaign partners, to tackle the BBC directly, calling upon Members of Parliament to take up this issue with the BBC Board. With you help this will be our biggest offensive on bias in the UK media to date. Please join us in making your voice heard.

We have chosen to focus this campaign on the BBC’s coverage of rocket bombardment into Israel from its southern borders. In the last two years the BBC has published only eight stories highlighting the security challenges that Israel faces from rocket attacks from Hamas, Islamic Jihad and ISIS.

However, on only ONE occasion did the BBC lead its report with accurate order of events.

On seven occasions their reports led with the Israeli military response instead of the initial attack against Israel.

Worse still, over that same period there were nineteen additional attacks on Israel that the BBC chose not to report on at all.

The BBC Board is accountable

The BBC’s content on Israel breaches its legal obligations which includes the demand that it “provide impartial news and information to help people understand and engage with the world around them”.

We want TRUTH to be aired

The impact of biased reporting against Israel cannot be underestimated. The BBC repeatedly avoids the context about who is provoking the violence; it relies upon Israel’s enemies for “facts and figures” whilst casting doubt on Israel’s “alleged” claims, and it doesn’t provide context to the larger military operations that often develop from these events.

Also, misreporting these events generates hostility towards Jewish communities. At a time of ongoing debate regarding anti-Semitism in the Labour Party, it is essential we act to confront the anti-Israel narrative in the media.

Please take a few moments using our online form to send an email to your MP with a copy to the BBC (and the Department of Culture, Media and Sport). Our detailed letter asks them to raise these issues with the BBC Board.

Thank you for your support.

ACT NOW: Email your MP and the BBC