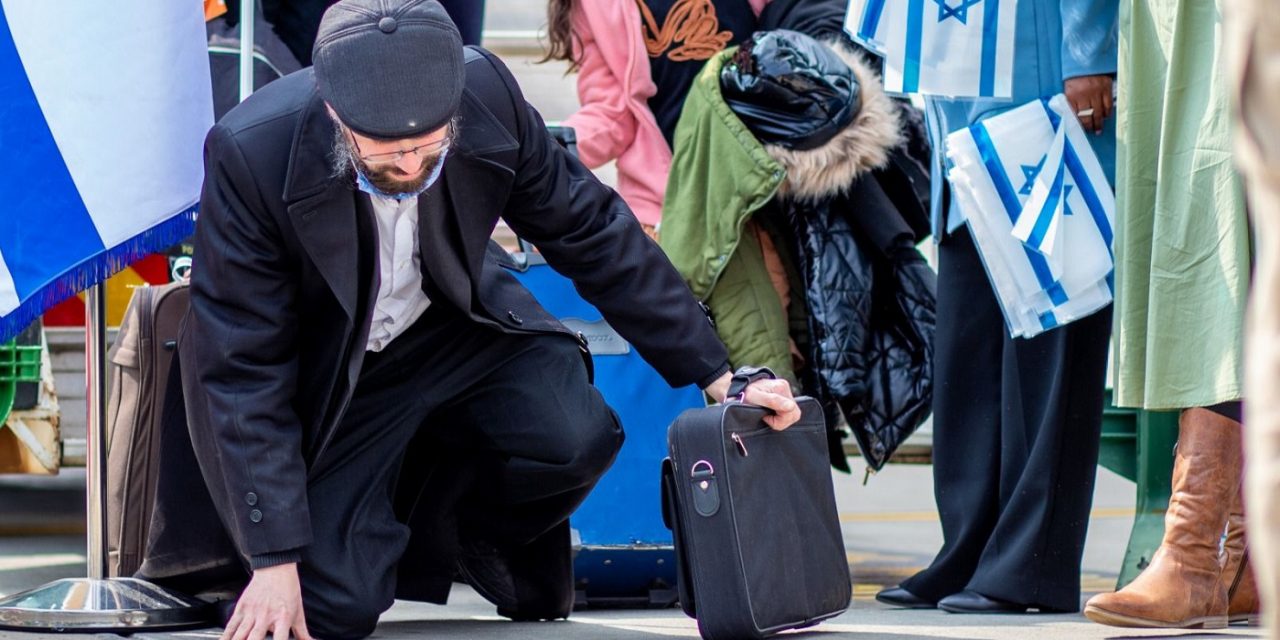 Israel has prepared for the possibility of a huge land evacuation of Ukraine’s Jews, estimated to number from 150,000 to 200,000.

On Sunday, Israeli diplomats serving in countries bordering Ukraine — Hungary, Poland, Slovakia, Romania and Moldova — visited border crossings and met with the officials in charge of the stations to discuss a potential land evacuation of Israelis and Ukrainian Jews should Russia carry out a full invasion.

On Thursday, following the commencement of a full invasion by Russia, Foreign Minister Yair Lapid called for all Israelis, estimated to be at 15,000, to leave Ukraine, warning that there is already movement of refugees toward the west in Ukraine. He emphasized that Israeli representatives are at the land crossings with the five countries bordering Ukraine to the west.

The border crossings Israel’s Foreign Ministry have identified through which Israelis can leave Ukraine by land are Medyka in Poland, Vysne Nemescke in Slovakia, Zahony in Hungary, Siret in Romania, and Palanca in Moldova.

In a press conference on Thursday, Lapid condemned the “Russian attack on Ukraine” in Israel’s first public criticism of Moscow during this conflict, adding that Israel has good relations with both Ukraine and Russia.

“The Russian attack on Ukraine is a serious violation of the international order,” Lapid said, “Israel condemns that attack, and is ready and prepared to offer humanitarian assistance to Ukrainian citizens.”

Earlier in the week, Lapid emphasized that “protecting the lives of Israel’s emissaries, Israeli citizens situated in Ukraine, and the large Jewish community in the country, is the State of Israel’s top priority.”

The comments came as Israel’s diplomatic staff in Ukraine on Tuesday completed a relocation from the capital, Kyiv, to Lviv in the country’s west.

In the face of the outbreak of the war, the rabbis of 160 Jewish communities in Ukraine issued special instructions to the leaders of communities and asked them to keep all the guidelines, take care of all the Jews in their cities and stressed that “We are staying here, in the country.”

Meanwhile, leaders of the Jewish Federation heads have stressed that “those who can leave Ukraine safely, should do so through land crossings.

Speaking to Haaretz from the eastern city of Dnipro, Rabbi Meir Stambler, the chairman of the Federation of Jewish Communities of Ukraine, said that he is worried about the possibility of antisemitic provocations carried out by Russian agents.

“We were never concerned about security, but now we are worried that the situation might change, so that’s why we are working on safety precautions for all the rabbis, communities, schools and synagogues,” Stambler told Haaretz. “They want to [accuse] Ukrainians of being antisemites or fascists.”

“There has not been—and we hope there will not be—any anti-Semitism due to what is happening,” Bleich  said. “We need a lot of heavenly help from God that things should stay under control and not get out of hand.”

Russian media was filled with false reports of anti-Jewish persecution during the early days of the conflict, with Russian President Vladimir Putin warning in March 2014 that the “rampage of reactionary forces, nationalist and antisemitic forces going on in certain parts of Ukraine” might necessitate a military intervention and Jewish leaders in turn accusing the Kremlin of staging antisemitic incidents for propaganda purposes.

“We believe in God”

Stambler was one of several Ukrainian Jewish leaders who have said that they are preparing emergency plans to evacuate and house large numbers of refugees should the conflict escalate into all-out war.

Speaking with Haaretz on Tuesday, Chief Rabbi Yaakov Bleich said that while Ukraine is much better armed and prepared than when the conflict with Russian broke out in 2014, a serious escalation could see a new wave of refugees fleeing the fighting.

“In the Jewish community we have contingency plans to accept refugees in the west if people need to leave. Our community is preparing a large complex in Zhytomyr, 100 kilometers west of Kyiv, for people who may want to evacuate voluntarily and in case we have refugees from the east,” he said. “We didn’t have that in 2014, we weren’t ready for it.”

Several families from eastern Ukraine have already fled to Russia and are being assisted by local communities, said Boruch Gorin of the Federation of Jewish Communities of Russia.

In a statement, the federation said that it has “organized humanitarian actions to provide assistance to all needy refugees of Donbas, regardless of nationality and religion.”

“In general the Jews and communities in the Former Soviet Union are still very close to each other and help each other,” explained Russian Chief Rabbi Berel Lazar. “So wherever and whenever a Jew will turn to us for help we will do our best to support him.”

Ilya, a Jewish businessman from Kyiv who asked that his last name be withheld for security reasons, said he was one of thousands of Jews living in Kyiv who received a prerecorded voice message from local Rabbi Moshe Azman last week, inviting them to take shelter at Anatevka, a refugee center he built outside of the city to house war refugees in 2016, should they need to flee the capital.

“I’ve received dozens of messages from Russia Jewish friends in Moscow saying ‘sorry about this, we don’t want a war, we didn’t vote for Putin.’”

“Neither the Ukrainians or the Russians want the impression that the Jews are not safe under them, so we have to tread very carefully there,” a senior Israeli diplomat told the Jewish Chronicle.

Dozens of new immigrants from Ukraine arrived in Israel on Sunday as tensions on the frontier between Ukraine and Russia reached new highs.

The Ministry of Aliyah and Immigrant Absorption said 75 immigrants arrived on the initial flight and another 22 were scheduled to land in Israel later in the day.

Other figures suggest 400 have arrived in recent weeks.

“Our message to the Jews of Ukraine is very clear — Israel will always be their home; our gates are open to them during normal times as well as in emergencies,” said Immigrant Absorption Minister Pnina Tamano-Shata.

“Today we are happy to greet dozens of immigrants from Ukraine, and we are prepared to absorb thousands who want to move to Israel… we are waiting with open arms,” she added.

Jana Kovlenko, who arrived from Kyiv with her husband, Evgeni, and their daughter, said that “right now it’s scary in Ukraine. Everyone is only talking about war. Until the last moment we were worried that the flight would be canceled due to the situation.”

Gidi Schmerling, of the International Fellowship of Christians and Jews, which organized the flight, said the immigrants were tense in the hours before departure.

“When the plane took off,” Schmerling, who was on board, told Army Radio, “there was applause.”

He said the new arrivals had been scheduled to immigrate, rather than rushing to do because of the current crisis.

Nearly 100 Ukrainian Jews immigrated to Israel on Feb. 20 to escape a dire situation they believed would only deteriorate even further.