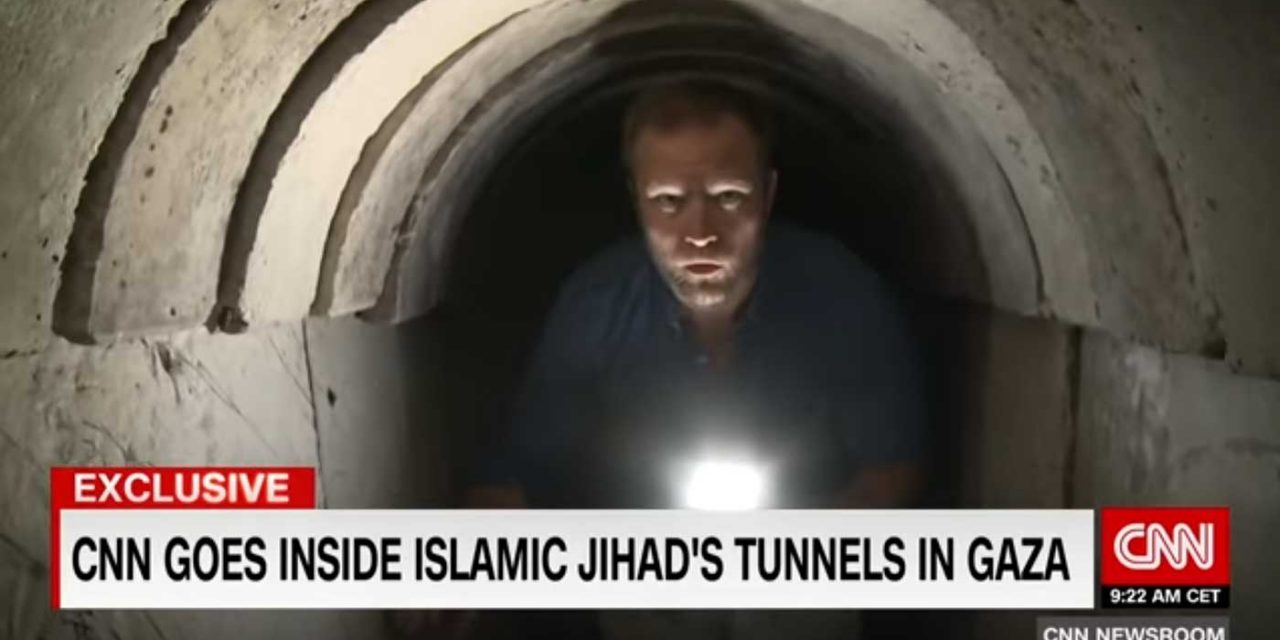 Ian Lee, an American reporter for CNN, was given a guided tour of a terror tunnel by the Palestinian Islamic Jihad (PIJ) terrorist group in Gaza. Lee was also shown a rocket launcher site and a military training area for the terrorists.

A video was posted by CNN on Sunday where Lee is filmed inside the tunnel along with armed PIJ terrorists. Their location is said to be “somewhere in the Gaza Strip”, and the filming took place a few weeks after heavy exchanges between Israel and Gaza terrorists, where terrorists launched over 100 missiles and mortars towards Israeli civilians prompting a strong response by Israel on Hamas and PIJ military targets.

An Islamic Jihad fighter, identified only as Abu Abdallah, explained in Arabic that the tunnels are used for moving fighters so that they can “play their role and defend the Palestinian people.” One of the terrorists explains that the purpose of the tunnel is for protection. The reporter then filled in that it was also used to carry out terror attacks on Israel as well as for smuggling.

The Islamic Jihad members, armed with rifles, are filmed crouching in the tunnel and receiving a “pep talk” from their commander as well as reading the Koran.

Lee is then blindfolded by the terrorist a taken above ground to another location where Abdallah shows him a four-barrel rocket launcher used in the recent attacks against Israel.

“The world hears the conflict only through Netanyahu’s voice,” Abdallah said. “We are trying to make it hear us through the sound of these simple missiles. To say that we are here, we have land, we are human beings and we want to live in dignity.” A surprising statement from a terrorist who targets Israeli civilians with these rockets without treating them “with dignity” or “as human beings”.

Three weeks ago, Islamic Jihad fired dozens of mortar shells and rockets at Israel, one of which landed next to a kindergarten, apparently in response to Palestinians being killed during the recent Gaza border clashes, 80% of whom were terrorists.

Asked by Lee why Islamic Jihad fires rockets at Israel’s civilian population, Abdallah responded that “the world needs to know that the resistance never plans to target children,” but that “mistakes are made”.

The Islamic Jihad fighter also confirmed that they are armed by Iran.

“Israel is proud of its support from the United States and we are proud of Iran’s support of the Palestinian resistance, on the moral and logistical level,” he continued. “There is nothing wrong with it and that is not a secret.”

Palestinian Islamic Jihad is a smaller terrorist group in the Gaza Strip that works alongside Hamas to carry out attacks against Israel. Unlike Hamas, PIJ has no ambition of government or for obtaining control over the Gaza strip, it simply seeks the eradication of Israel. It is a proscribed terror group.

In response to the large number of terror tunnels being constructed, Israel is in the process of constructing a massive barrier that reaches deep underground along the border to block tunnels. Over the past year, the IDF has destroyed several tunnels it uncovered, including some that reached into Israeli territory.