More than 45 rockets fired into Israel overnight; one targets kindergarten 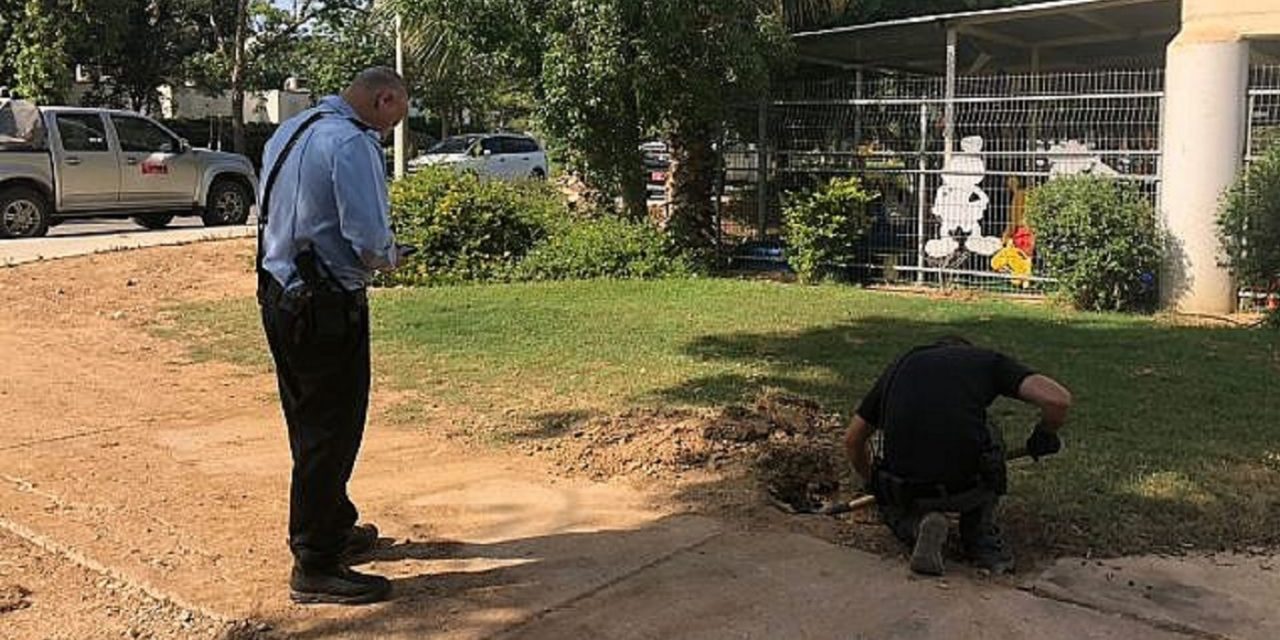 Over 45 rockets and mortar shells were launched from Gaza towards Israel during the night, including one that struck just outside an Israeli kindergarten.

Rocket sirens blared in the south throughout the early morning hours Wednesday, as the barrage of rockets and mortar shells were fired toward Israeli towns, prompting three rounds of Israeli airstrikes on Hamas military sites in the Gaza Strip.

At least five rockets fired from Gaza landed inside Israeli communities adjacent to the border, including one that landed outside a kindergarten. Most of the others landed in open fields in southern Israel. Seven were intercepted by the Iron Dome.

Hamas fired rockets at a kindergarten in southern Israel. This is not the first time it’s happened.
Dozens of children spend every day here and only luck prevented them from being injured pic.twitter.com/gdKxCQjAQ0

In response to over 45 rockets launched by Hamas towards southern Israeli communities, the IDF targeted military objectives in the Gaza Strip belonging to Hamas pic.twitter.com/1UvzPK9JAm

The IDF said fighter jets struck approximately 25 targets in various military bases belonging to the Hamas terror group from the north to the south of the Gaza Strip in response to the rocket and mortar fire.

Of the nearly 50 projectiles fired at Israel, seven were intercepted by the Iron Dome anti-missile system and at least three failed to clear the border and landed inside the Gaza Strip, the army said.

There were no immediate reports of injuries on either side of the border, but the Eshkol council reported damage to a number of buildings and cars.

About 200,000 israelis spent last night in bomb shelters. Palestinian jihadis in #Hamas occupied #Gaza fired some 45 rockets towards towns in southern Israel. There will be no news headlines, no TV debates and no @UNHumanRights condemnations… only us, israelis, to remind you pic.twitter.com/ON2ev5wtMy

The Israeli military accused Hamas, the Islamist terror group which rules Gaza, of “targeting Israeli civilians throughout the night with a severe rocket attack and dragging the Gaza Strip and its civilians down a deteriorating path.”

“The IDF is prepared to defend Israeli civilians and will increase its activity as necessary.”

The IDF said that Hamas is responsible for “everything that transpires in the Gaza Strip and will bear the consequences for deliberately targeting Israeli civilians.”

The IDF spokesman added that it views Hamas’ terror activity “with great severity and is prepared for a wide-variety of scenarios and will continue operating to fulfill its mission to defend Israeli civilians.”

Hamas, meanwhile, blamed Israel for the escalation of violence, saying it had “changed the rules of engagement” by adopting the policy of targeting Hamas positions in response to kite- and balloon-borne arson attacks.

In response, Israeli aircraft struck three Hamas targets in the south of the coastal enclave around midnight on Tuesday.