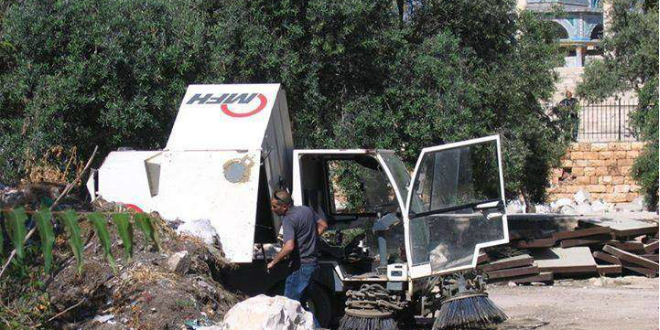 The Temple Mount was closed to Jews during the last week of Ramadan. During that time, the Muslim Waqf, which controls the Temple Mount, removed large mounds of dirt from the holy site which likely contained sacred and archaeologically valuable artefacts from the times of the Jewish Temples.

According to Arnon Segal, writing in Makor Rishon, around 1,000 workers were employed during the final week of Ramadan in order to move dirt to be used in the construction of new terraces. Some of the dirt, however, was removed entirely from the compound to unknown locations.

The dirt was originally dug up in 1999, when the Waqf carried out large-scale illegal construction work at the holy site in order to create a new mosque in the section of the Mount known as Solomon’s Stables. At that time, 400 truckloads of archaeologically valuable dirt were removed and dumped into city landfills and the Kidron stream.

Eventually, the Israeli authorities intervened and the dirt that had not yet been dumped was saved. Since then, the Waqf had been conspiring how to get rid of the mounds of dirt because they were hindering its plans for carrying out more construction and development on the east side of the compound.

This Ramadan provided the opportunity the Waqf had been waiting for. With Jews banned from the Mount for the week that includes Eid al-Fitr – it could carry out its surreptitious plans without being noticed.

The Waqf also proceeded to erect a monument in memory of the Gazan paramedic, Razan al Najar, who was killed two weeks ago in the clashes along the Gaza border – at the location where the mounds of dirt previously stood.