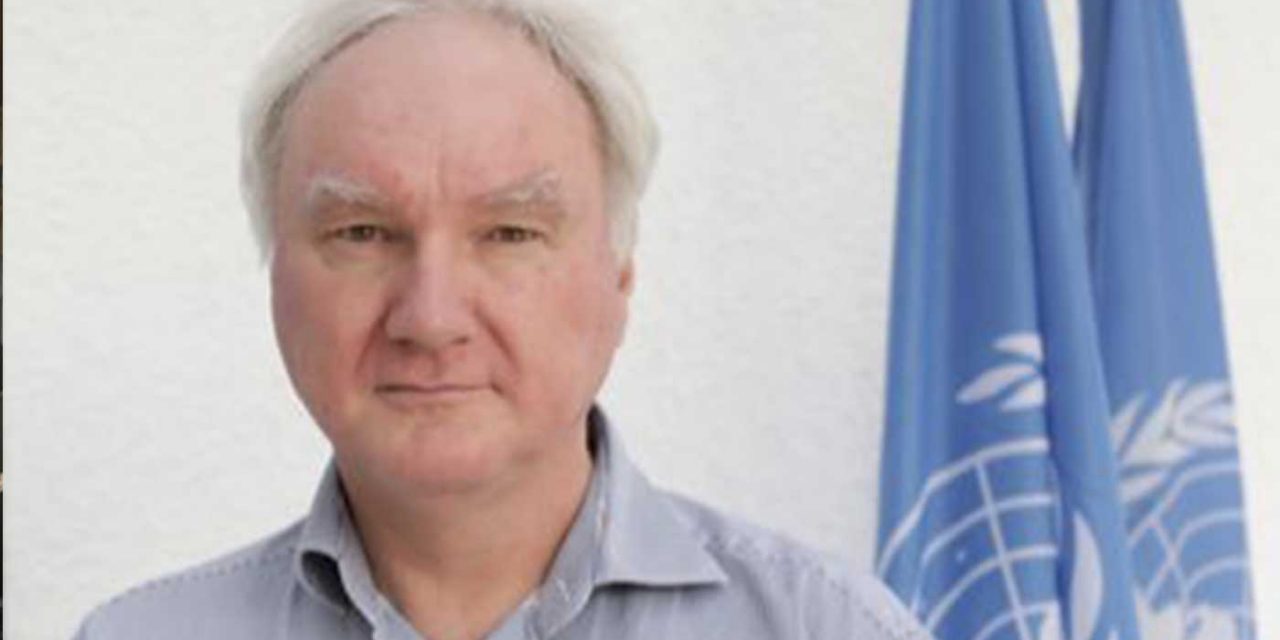 The head of the UN Palestinian refugee agency’s mission in Gaza has been recalled from his post following uproar in Gaza, primarily from Hamas, after he correctly detailed Israel’s strikes against Hamas as being “precise” and “sophisticated”.

Hamas was outraged by the comments made by UNRWA’s chief, who also in the interview explained how Gaza was not suffering from any lack of food, water or medicines throughout the conflict.

Matthias Schmale, who made the comments, left the Hamas run territory on Wednesday along with his deputy David de Bold. They are currently working from UNRWA’s offices in Jerusalem.

The uproar came from a May 23rd interview where Schmale was asked about the IDF’s assertion that its military strikes were very precise. He responded: “I’m not a military expert but I would not dispute that. I also have the impression that there is a huge sophistication in the way the Israeli military struck over the last 11 days.”

In the interview, Schmale said that despite their accuracy, the strikes in the latest conflict were much more “vicious” than in the 2014 war.

“So yes they did not hit, with some exceptions, civilian targets, but the viciousness and ferocity of the strikes were heavily felt,” he said.

He then clarified, “so the precision was there, but there was an unacceptable and unbearable loss of life on the civilian side.”

Well, there you have it: the Gaza head of UNRWA, the UN agency for Palestinian humanitarian matters, says he "would not dispute" Israel's claim that its airstrikes were "very precise," noting that "they didn't hit, with some exceptions, civilian targets." pic.twitter.com/HFTPouHnH5

As you can see from the interview, his comments were not exactly praising the IDF, but merely pointing out facts that instead of Israel’s airstrikes being “indiscriminate” as the media keeps telling us, he instead told the truth that Israel’s strikes are “precise”.

He later apologised for his comments and called for an independent investigation into Israel’s actions, seemingly in an attempt to quell the outrage.

Hamas was furious and said in a statement that his “comments are a complete distortion in favour of the Zionists, including an attempt to exonerate the Occupation of the murder of 254 Palestinians, more than 40% of them children, women and the elderly.”

You will notice from media reports about deaths in Gaza that the ministry of health inside the strip, which is run by Hamas, never reveals the number of Hamas or other terrorist fighters that were killed. This latest statement from Hamas may give a hint to the fact that most of those killed by Israeli strikes were indeed terrorists.

Israel maintains that the vast majority killed are fighting-age men. And many of the civilians killed (at least 50) were killed by Hamas rockets being misfired.

On the first day of fighting alone, eight civilians (including six children) were killed by a Hamas rocket that fell on a Gaza home. This occurred before the IDF fired a single shot into Gaza but Israel was blamed for the atrocity even by MPs in Britain.

When the dust settles from this recent conflict we will have a much clearer picture of all those killed, including which ones were members of terror groups and how each one died. With hindsight, we usually see that Israel’s side of events is closer to the truth than those projected by Hamas and spread by the media. Unfortunately, the world will have moved on by that point and already made their mind up about the conflict regardless of how accurate that view may be.

It is a shame the UN’s representatives in Gaza are unable to speak the truth about the conflict. The narrative of Hamas must be countered with the truth.