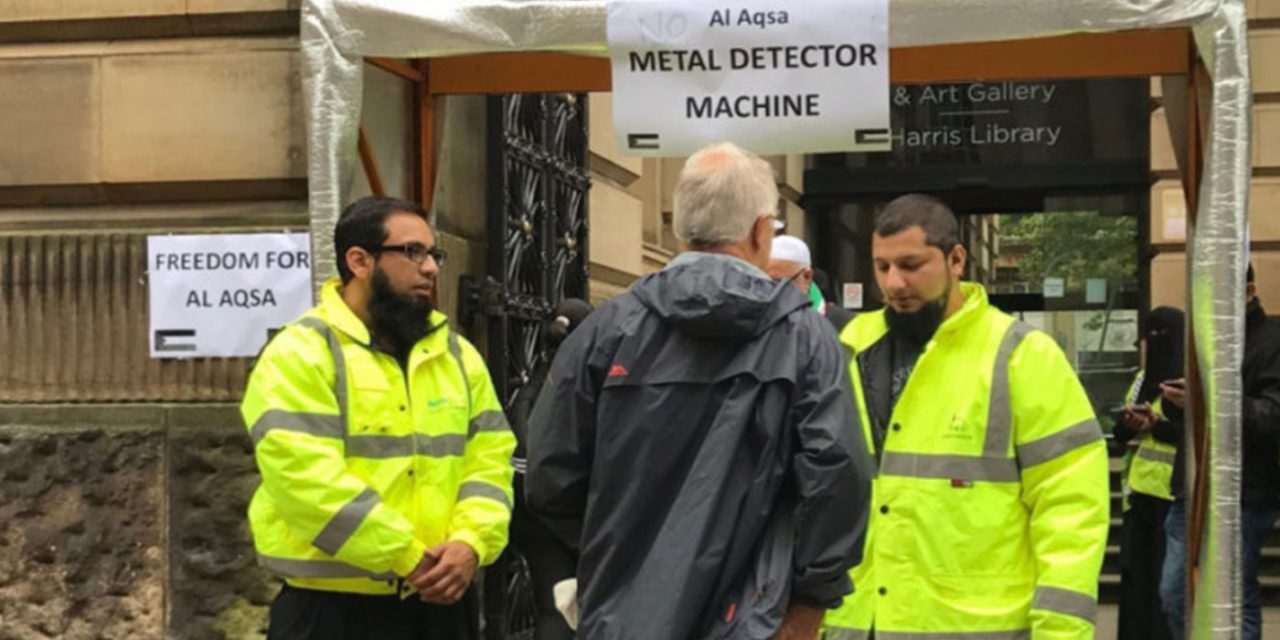 A local protest group constructed a fake metal detector outside the Harris Library in Preston, Lancashire on Saturday to highlight, what it called, “the plight of the Muslim Palestinians of Jerusalem”.

The ‘metal detector’ appeared outside the entrance to Preston Harris Library, a government owned building in the heart of the Lancashire city.

This ‘metal detector’ appeared outside the Harris Museum over the weekend, but it was not an extra security measures.

In fact the symbolic metal detector was a stunt by local protest group Children of the Ghetto, aimed at highlighting the situation at the Masjid Al Aqsa mosque in Jerusalem.

The detectors outside the mosque, the third holiest in Islam, have been a source of controversy.

Imam Amjad Bapu, of Preston, said: “The checkpoint at the Harris library was a lighthearted gesture aimed at raising awareness. Many individuals volunteered to pass through the metal detector and at the same time learnt about the plight of the Muslim Palestinians of Jerusalem.”

The picture above shows people in the background handing out leaflets, presumably regarding the campaign in support of the Palestinians.

It is important to note this protest took place at a government owned library where the general public who wanted to use the library would have been unable to access the facility without walking directly through the metal detector and interacting with the protestors. We are unsure at this time if the protest was authorised by the local council or if the short duration of the protest indicates that they told to vacate the area.

Another important note, the Lancashire Post describes Jerusalem as being in “Palestine” instead of Israel.

If you want to raise this issue with Preston Council, you can contact them here: https://forms.preston.gov.uk/ShowForm.asp?fm_fid=63

A special thank you to the CUFI supporter who highlighted this story to us and another who gave details of house to contact Preston council. If you have any stories like this, please let us know either by emailing [email protected] or messaging us on Facebook.