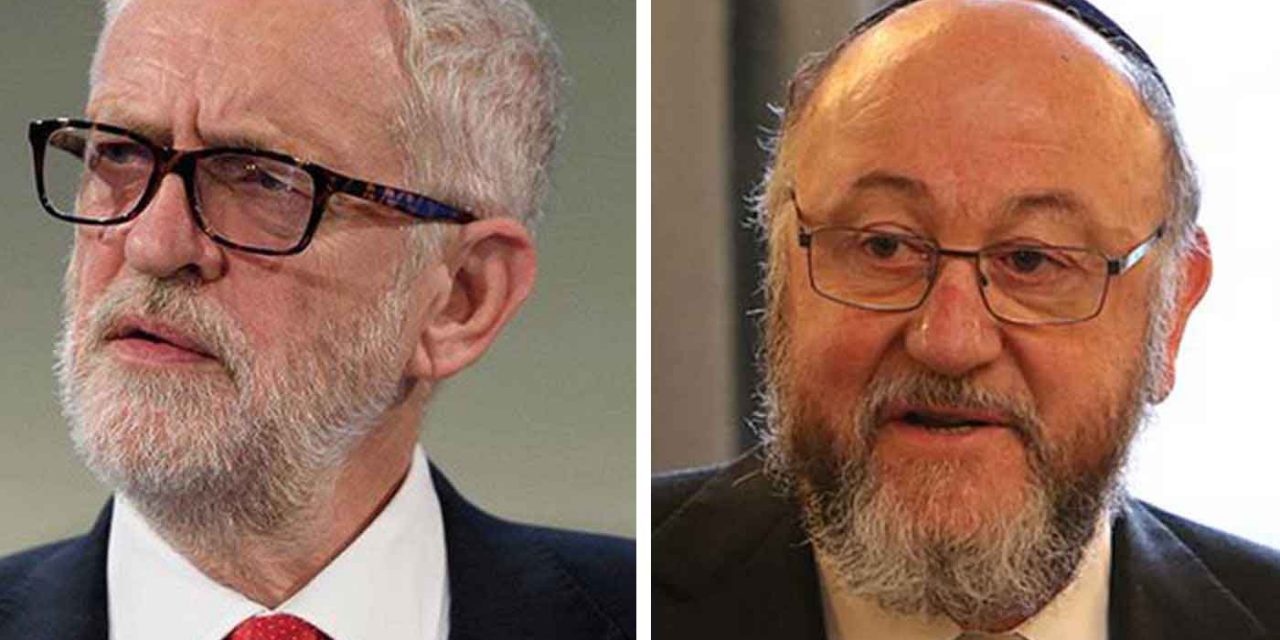 Britain’s chief rabbi, Ephraim Mirvis, has given a stark warning about Labour and the “poison” of anti-Semitism within their party in the days leading up to the general election.

Writing in The Times, Rabbi Mirvis spoke of the “justified fear” that the Jewish people have over the prospect of a Labour government under the leadership of Jeremy Corbyn. That “a new poison – sanctioned from the very top – has taken root” in the party.

He also said Labour’s claim it had investigated all cases of anti-Semitism in its ranks was a “mendacious fiction”.

Rabbi Mirvis said, “During the past few years, on my travels through the UK and further afield, one concern has been expressed to me more than any other. Of course, the threats of the far right and violent jihadism never go away, but the question I am now most frequently asked is: What will become of Jews and Judaism in Britain if the Labour Party forms the next government?”

The chief rabbi said that “raising concerns about anti-Jewish racism in the context of a general election ranks among the most painful moments I have experienced since taking office.”

Sadly, the Rabbi Mirvis points out that Jews are being “treated by many as an irritant, as opposed to a minority community with genuine concerns.”

Although the chief rabbi did not specifically say this, it would be fair to say on our part that the stance Labour has taken has helped to fuel this anti-Jewish perception in the eyes of the public. And even though Labour claims to be an anti-racist party, there is no doubt that racism against Jews has increased because it has featured so prominently in the media.

Rabbi Mirvis writes: “The way in which the leadership of the Labour Party has dealt with anti-Jewish racism is incompatible with the British values of which we are so proud – of dignity and respect for all people.

“It has left many decent Labour members and parliamentarians, both Jewish and non-Jewish, ashamed of what has transpired.”

He adds that it was “not my place to tell any person how they should vote” but he urged the public to “vote with their conscience”.

The chief rabbi claimed the response of Labour’s leadership to threats against parliamentarians, members and staff has been “utterly inadequate” and said it “can no longer claim to be the party of equality and anti-racism”.

It is highly unusual for religious leaders to get involved in this manner, and is almost uncalled for amongst the Jewish community. However, the warning against Corbyn is welcome.

Jeremy Corbyn and the leadership team have been some of the most ardent and longstanding anti-Israel activists in British politics for decades. They have objected to the banning of radical Islamic terrorist groups who seek to destroy the Jewish people, they have campaigned tirelessly against Israel and befriended the enemies of Israel and the Jewish people. To say they are bad news for both Britain’s Jewish community and for the UK-Israel relationship would be an understatement.

Recent polls show that 93% of Jews won’t vote Labour with Corbyn as the leader and some 40% will “seriously consider” emigrating if Corbyn becomes PM. There is no question that the chief rabbi is speaking on behalf of his community and non-Jews need to wake up to their genuine concerns.

We cannot allow anti-Semitism or those who promote anti-Jewish attitudes to gain more ground in British politics. There has already been far too much attention given to those who hate Israel and espouse anti-Semitic views. This election we all have an opportunity to make a difference for the better in this nation.