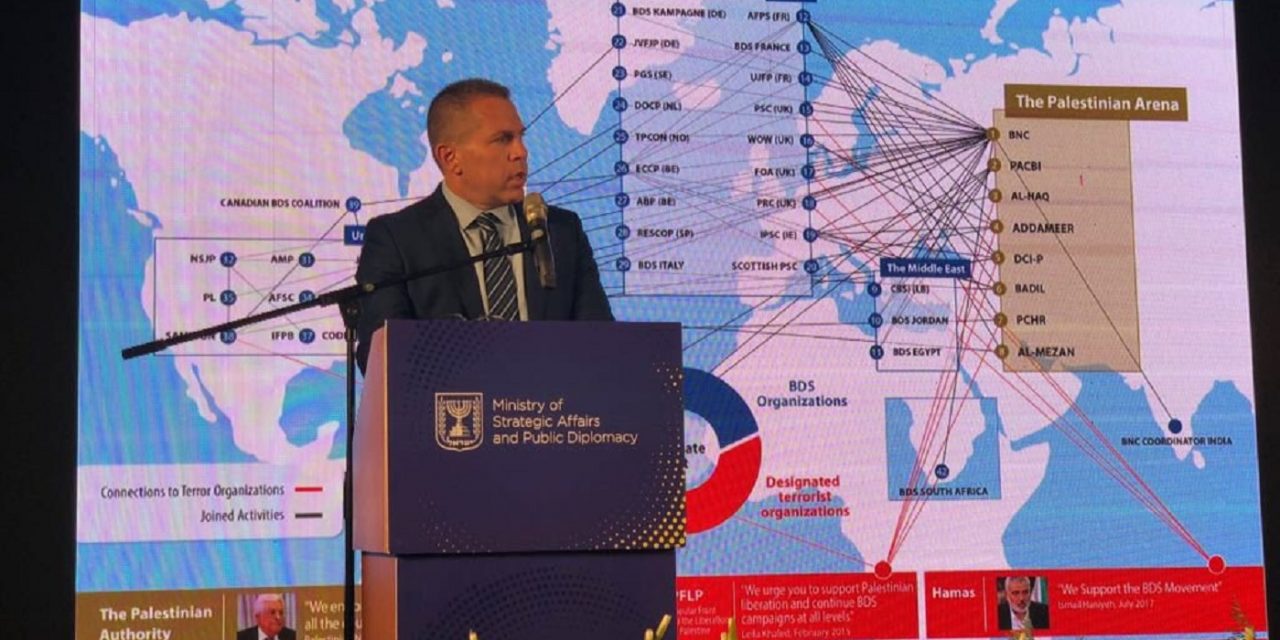 An Israeli minister has revealed the deep connection between the anti-Israel boycott movement, including BDS groups in the UK, and terrorist organisations like Hamas and Popular Front for the Liberation of Palestine.

Speaking at this year’s Global Coalition 4 Israel Forum (GC4I), which began on Tuesday night, Israel’s Minister of Public Security and Strategic Affairs, Gilad Erdan, detailed the links between organisations involved in the boycott movement against Israel and Palestinian terrorist groups.

Among those organisations mentioned by Erdan was the UK based Palestinian Return Centre, which he alleged “advances the interests of Hamas in Europe,” and that the members of the Palestine Solidarity Campaign and Friends of al-Aqsa, also based in the UK, have met with Hamas officials in Gaza, including Hamas leader and Politburo chairman Ismail Haniyeh.

He also noted that activists from these groups were aboard the Mavi Marmara ship, which was part of a flotilla attempting to break the blockade of Gaza in 2010, and recently held a demonstration outside No.

Presenting a “Hate Net Map” of BDS groups and their links, Erdan explained, “The perpetrators of this hate-filled campaign, who derive their ideology from the PA and Hamas, are united in their goal of attacking Israel, and are leaving no stone unturned in their efforts.”

“Under the guise of ‘civil activities,’ a coordinated and financed network of organizations is led from Ramallah and Gaza, a quarter of which have links to terrorist organizations, including Hamas and the PFLP.”

Erdan alleged that senior officials in Palestinian NGOs al-Haq, P-DCI, and Addameer have been in the past and are currently activists in the Popular Front for the Liberation of Palestine terrorist organization. 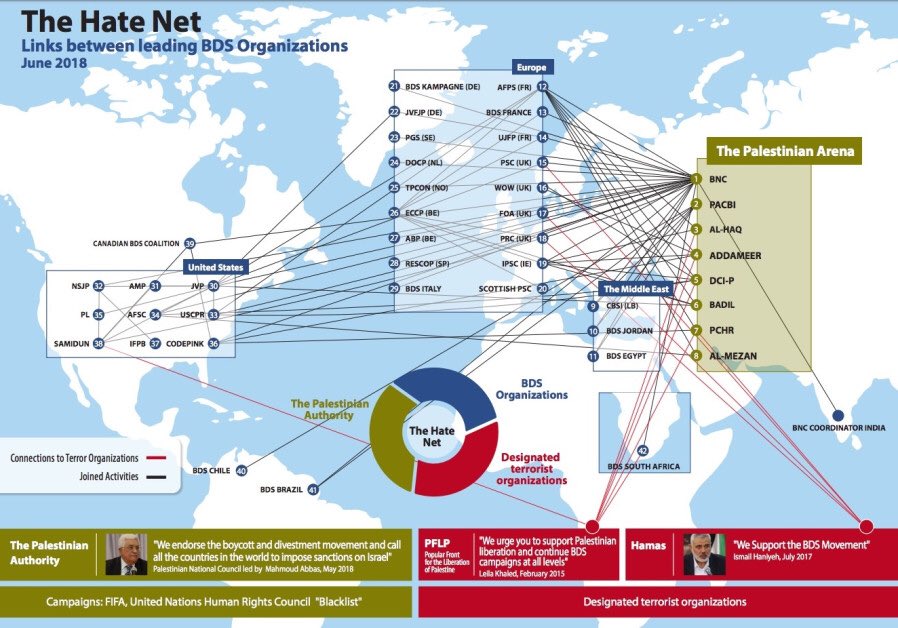 The minister noted that al-Haq director Shawan Jabarin, a leader of the legal warfare campaign against Israel, served a 13 year prison sentence in an Israeli prison for his involvement in the military wing of the PFLP.

PFLP terrorist Leila Khaled was involved in a fund raising campaign for BDS South Africa said Erdan, while ties between the American boycott organization “Semidoun” and the PFLP were also discovered by the ministry.

The minister also pointed to the Palestinian Authority’s recent adoption of the principles of the boycott movement in its Palestinian National Council in May.

“We saw attempts by senior PA officials to suspend Israel from FIFA and to promote the ‘black lists’ formulated by the UN Human Rights Council,” he said.

“All of these campaigns, exposed by the Ministry of Strategic Affairs, were extensively promoted by the BDS organizations.”

Erdan insisted, however, that Israel has been successful in countering much of the boycott movement, saying that “leading countries” such as the UK, Germany, the US, France and Canada have “turned their back” on BDS organizations, and noting that 25 US states have legislated against the BDS movement.

“Because of the policies we have led on this issue, millions of dollars, the fuel of the boycott movement, have been stopped in recent years, whether by international organizations or by states,” noting that the ministry had recently shown EU officials that funds it has given to Palestinian human rights groups have been transferred to “organizations which have connections with terrorist groups.”

Erdan also noted that the boycott campaign has been ramping up its activities of late, and have been lobbying politicians in various countries, and working towards trade embargoes of Israel, including halting cooperation with Israel’s defense industries.

“The relationship between terrorist organizations and the BDS movement has never been closer, ideologically or operationally. I will continue to go after the perpetrators of this antisemitic hate campaign stemming from Gaza and Ramallah,” he said.

Today at the #GC4I2018 forum, I revealed the map of the Delegitimization Network- aka, the Hate Net.
We've mapped out the 42 leading #BDS orgs, their hub in Ramallah & the connections between them. We're exposing their anti-Semitism & ties to terrorist groups like #Hamas & PFLP pic.twitter.com/N4hdwfnaf4