#TousAvecUneKippa: French social media campaign encourages everyone to wear a kippa in solidarity with Jews

A social media campaign is calling for non-Jews in France to wear a kippah in solidarity with the Jewish people. It comes after a call by a Jewish leader in Marseille to remove their skullcaps to make themselves less vulnerable following a machete attack on a Jewish man earlier this week.

Using a hashtag #TousAvecUneKippa (everyone with a kippah), the campaign is calling on French people of all backgrounds to don the traditional Jewish skullcap and post a selfie on social media this Friday in a show of solidarity against anti-Semitic attacks. 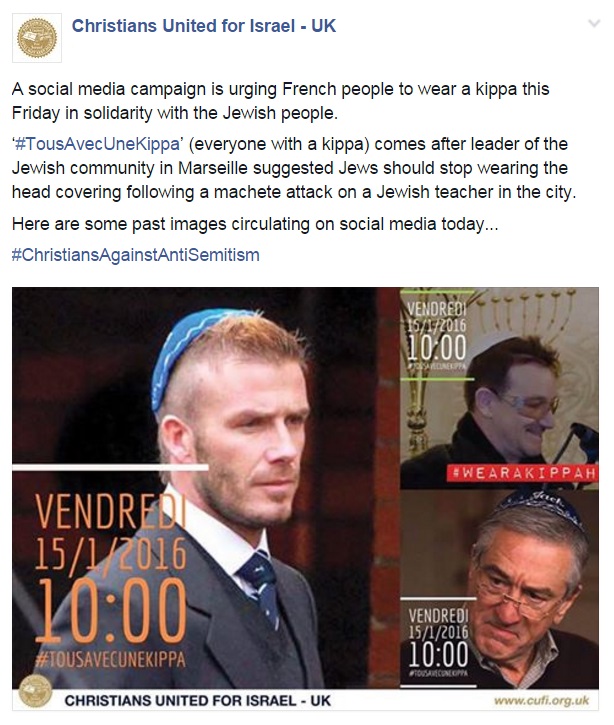 Earlier this week Zvi Ammar, the main Jewish leader in the French city of Marseille urged men to stop wearing the skullcap “to avoid being identified as Jewish”.

He said the “exceptional measure” was needed to protect Jewish lives. “Remove the kippa during this troubled time until better days,” Ammar said.

Ammar made these comments as a direct response to a violent anti-Semitic attack on a teacher on Monday. Benjamin Amsellem, the victim, was attacked with a machete and left with an injured shoulder and hand. He was targeted for being Jewish and was wearing a skullcap at the time.

It also follows other anti-Semitic attacks that have taken place over the past few months in Marseille, France’s second largest city and the third largest Jewish community in Europe.

France’s president, Francois Hollande said, “It is intolerable that in our country citizens should feel so upset and under assault because of their religious choice that they would conclude that they have to hide”.

Many Jewish leaders in France have spoken out against the idea of hiding their religious identity. On Wednesday, France’s chief rabbi, Haim Korsia, said, “We should not give an inch. We should continue wearing the kappa”.

Roger Cukierman, the head of the country’s umbrella grouping of Jewish organisations, CRIF, agreed, saying the call to hide our identity reflected “a defeatist attitude”.

And now social media users in France are trying to turn the idea on its head, by calling for everyone to wear a kippa at 10am local time on Friday.

Many posted pictures of both Jewish and non-Jewish celebrities wearing skullcaps over the years as a form of encouragement.

The campaign has taken on considerable momentum with people all around the world talking about it through social media. Mainstream media, such as the BBC, are also taking note.

We hope and pray that the people of France will take hold of this campaign and use it in a positive way to show solidarity with France’s Jewish community. No one should have to hide their religious identity for fear of being attacked.