Israel remains one of safest places for Christians to live in the Middle East. Open Doors, an organisation that supports persecuted Christians, has published its annual World Watch List highlighting the 50 countries where it is most difficult to live as a Christian…and unsurprisingly Israel is still not one of them.

The World Watch List is published every January and lists the 50 countries worldwide where Christians experience the most persecution. Open Doors says the survey is based on a comprehensive scoring system that measures the degree of freedom Christians have to live out their faith in five spheres of life – private, family, community, national and church life – plus a sixth sphere measuring levels of violence.

The list reports that persecution became more intense in more parts of the world in 2015. While North Korea remains the most difficult place in the world to be a Christian, persecution is growing most rapidly in Africa, especially sub-Saharan Africa. In the Middle East, Islamic State violence in Iraq and Syria has increased the pace of the exodus of the Christian population from the region and is also having a global impact.

Meanwhile, Christian persecution is on the rise in the Palestinian Territories, which is ranked as the 24th most difficult place to live as a Christian. Citing Islamic extremism as the main source of the persecution, Christians make up less than 1% of the population and decreasing. 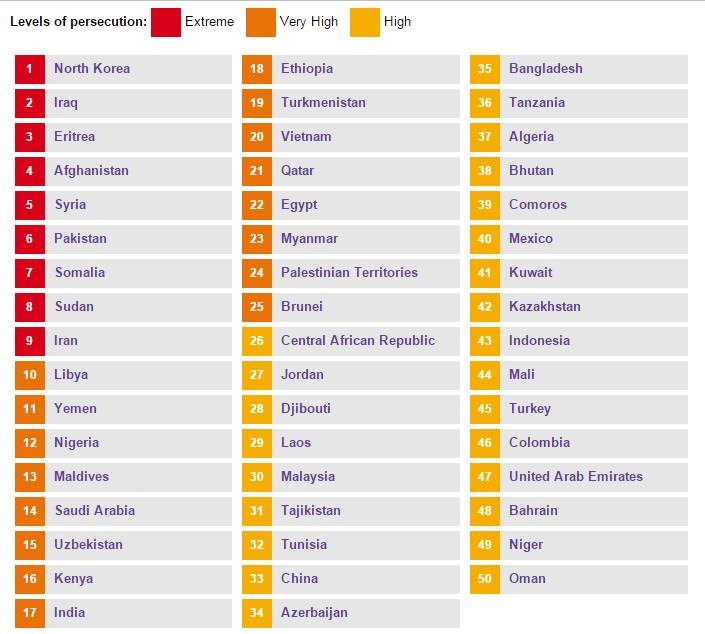 The report recognises that Christians in the West Bank enjoy several rights under the ruling Fatah party, however in Gaza Christians’ rights are neither upheld nor protected. The Palestinian Basic Law states that the official religion is Islam and Sharia is the main source of legislation.

In addition to discrimination, fear is also growing amidst a general context of political unrest and the increasing influence of radical Islam in the Middle East. According to the report, Christians face threats from radical Islamic vigilant groups, as shown by the attack on a church in Gaza in February 2014. At more mosques, the volume of loudspeakers is higher and more women are wearing the veil, including Christian women who feel the pressure to cover up.

The report says, “In Gaza, some members of the historical churches are vulnerable for conversion to Islam because, in the first instance, they don’t see the difference between Christianity and Islam. They are Christian by birth and not necessarily out of choice. They convert because they feel trapped, cannot stand the threats, or are lured with offers of housing, wives, jobs or diplomas. Once converted, many of them soon regret it. The ties with their Christian identity turn out to be stronger than they thought. However, in Islam it is not easy for a convert to return to their former religion.”

The report says, “Of all types of Christians, Muslim-background believers face the most severe persecution. In the West Bank, they are threatened and pressured; in Gaza, their situation is so dangerous that they live their faith in utmost secrecy. Children whose parents have converted are likely to be harassed or discriminated, and if a Christian married to a Muslim is divorced, he or she would be excluded from having custody of the children. Muslim-background believers cannot officially gather as a congregation nor can they openly join existing churches. Nevertheless, the number of such believers is growing slowly.”

CUFI UK welcomes the fact that Israel remains one of the safest places for Christians in the Middle East, but remains very concerned about Christians living amid increasing persecution in the West Bank and Gaza.

Des Starritt, Executive Director says, “The report by Open Doors is another reminder of the severe persecution Christians are experiencing in various parts of the world. It is essential that we pray for Christian believers at this time. It is important to note that Israel remains one of the few places in the Middle East that Christians can live safely, but we must continue to remember those believers that experience persecution as a result of Islamic extremism elsewhere in the region.”