The world ignores Palestinian terror while condemning the victim, Israel 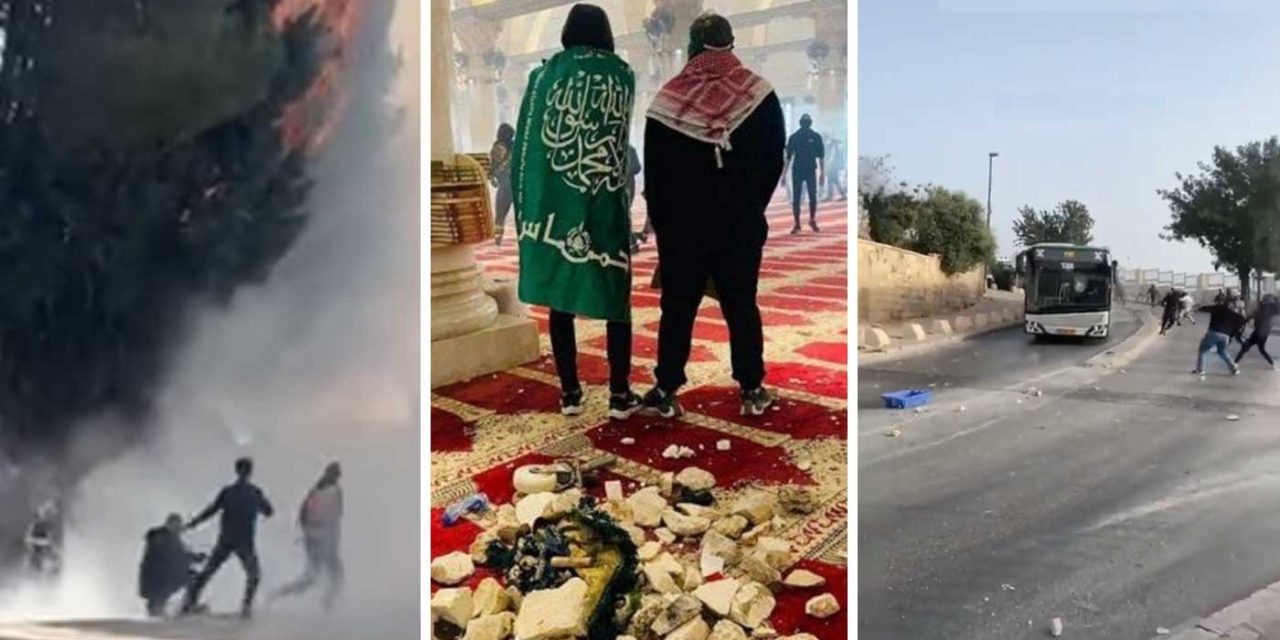 Over the past week, Palestinian rioters and terrorists have been carrying out attacks against Israeli civilians and have desecrated the holy sites of Jerusalem. Israel, on the other hand, has acted to try and keep the peace, to help both Muslims and Jews to continue to worship in Jerusalem. Instead of the world condemning the terrorists, Israel has been blamed and smeared by the world’s media. It is a disgraceful display of the victim being blamed for the crimes of the aggressor.

In this article, we want to highlight some of the terrorism that Palestinians are carrying out against Israelis and show why Israel should not be condemned but applauded for their actions in protecting all lives in Israel.

There has long been a trend that when Jews are the victims of hate crimes, the world turns a blind eye. Nowhere does this happen more so than when Israelis are attacked.

On Easter Sunday, three Jewish men were filmed being attacked in Jerusalem. Their only crime was being Jewish and walking in their nation’s capital city.

Israel is determined to maintain freedom of worship for all. That includes clamping down on those that promote violence, desecrate holy sites and pervert the spirit of the holy days.pic.twitter.com/LcUSkOaY7x

The video shows three Jewish worshipers wearing prayer shawls passing through a Jerusalem alley when they are suddenly attacked. Their attackers threw objects at them and punched and kicked them before fleeing the scene.

Fortunately, two suspects in the incident were arrested shortly after by Israeli police.

“Israel is determined to maintain freedom of worship for all. That includes clamping down on those that promote violence,” the Foreign Ministry said in response to the attack.

Also on Sunday, Palestinian rioters (although they should more accurately be called terrorists) attacked several Israeli buses as they drove through Jerusalem. These civilian buses were simply transporting Jewish families through Jerusalem.

Watch the brutality of these attacks below.

Statement by @israelpolice: Police received a report of stone-throwing at buses traveling near the Old City of Jerusalem. As a result of the stone-throwing, several buses were damaged and a number of passengers were lightly injured and are now receiving medical treatment. pic.twitter.com/gJzQL9vYZb

Western Wall Rabbi Samuel Rabinowitz condemned the attack, saying this was a “terror attack in the city that sanctifies freedom of religion. Anyone who wants to should be able to pray in peace and security.”

Shlomi Padida, one of the bus drivers caught in the incident, told Israel’s N12 news channel about the incident saying that “a kilometer and a half away from the Western Wall, group of young people were waiting for me with stones and threw them at the bus. I shouted at the passengers to lie down on the floor.” According to Padida, about 15-20 people attacked the bus.

Video from inside one of the buses shows women and children prone on the floor of the bus as they seek protection from the rocks raining down upon them. The video shows windows smashed in the background and a large rock on one of the seats, it is clear that someone could have been seriously injured in this attack

We want to stress here that these are innocent children! Their only ‘crime’ was being Jewish and living in Israel.

These are just two incidents of many where Israelis were attacked by Palestinians, but there have been dozens throughout this week. Yet, it is supposed to be a holy time for all of Jerusalem’s religions. It was Easter weekend for Christians, Passover for Jews and Ramadan for Muslims, after all.

Sadly, Ramadan is used as an excuse for some radical Islamists to carry out acts of violence. This is unfortunately nothing new for radical Islam.

The hatred against Israel was not confined to the streets of Jerusalem but also saw flare-ups on the Temple Mount. Rioters and terrorists used the Al-Aqsa mosque as a base to carry out attacks and disrupt worship on the Temple Mount. And in doing so they desecrated their claimed holy site.

According to Islamic law, no outdoor footwear should be worn inside a mosque. Yet, there is video evidence showing hundreds of Palestinian rioters inside the mosque wearing shoes.

It is clear they had no respect for the place they claim as holy. It was nothing less than the desecration of a holy site by radical Islamist terrorists.

The actions of these terrorists meant that thousands of Palestinian worshippers were unable to pray at the mosque. And Israeli forces, after being unable to convince the Waqf to control the situation, were forced to enter the mosque, arrest the terrorists and bring about peace.

It appears the aim of the terrorists was to get the Israeli police to enter the mosque. They knew that as soon as an Israeli stepped into that mosque it would be enough to incite violence and hatred against Israel and the Jewish people for many in the Islamic world.

Media outlets then reported on the news, but viewers were not shown the pictures of Palestinian rioters desecrating the holy site. They were only shown pictures of Israeli police inside the mosque arresting people. And the narrative went something along the lines of: “The Israeli police, unprovoked, entered the mosque and arrested peaceful worshippers because the Palestinians are the victims of a brutal occupation and that’s how they are treated by the evil Israeli forces.” (Not a direct quote)

Western media outlets also seemed to ignore the crimes of the Palestinian rioters and instead sought to blame Israel. They also reported the incident half way through the story, when the Israeli forces acted against terrorism.

Right on cue, Hamas terrorists in Gaza then fired rockets toward Israeli civilian populations. Israel’s Iron Dome defence system shot the rockets out of the sky and Israeli forces retaliated by destroying Hamas terror targets, such as weapon depots in Gaza.

Again, the Western media, including Sky News, reported the incident with the emphasis on Israel striking Gaza. They made it sound like Israel was the aggressor and again blamed the victims of terror instead of the terrorists themselves.

Shamefully, Arab nations also spoke out in condemnation of Israel. In particular, Jordan praised the actions of Palestinian terrorists and called for more violence.

The following words came from Jordan’s Prime Minister himself!

“I salute every Palestinian, and all the employees of the Jordanian Islamic Waqf, who proudly stand like minarets, hurling their stones in a volley of clay at the Zionist sympathizers defiling the Al-Aqsa Mosque under the protection of the Israeli occupation government,” said Bisher al-Khasawneh.

Jordan also accused Israel of violating the status quo at the site.

It should be pointed out that the ‘status quo’ means only Muslims are allowed to freely visit and pray at the Temple Mount while Jews cannot pray and may only visit during restricted time slots. That “status quo” sounds quite discriminatory to us (maybe even a little apartheid…).

Additionally, because of the violence caused by Palestinian rioters, the last ten days of Ramadan will mean only Muslims are allowed to enter the Temple Mount compound. No Jews or Christians will be allowed to visit.

It is sad that the terrorists are allowed to win. The aggressors who caused the unrest get to keep their freedoms while the peaceful victims are the ones who lose theirs. It doesn’t seem fair, but Israeli officials are being forced to act in this way to try and calm down tensions.

You see, Israel does not want more violence. Unlike their Palestinian neighbours, Israel has always sought peace and is the only side in this conflict actively taking steps to bring about peace, even at the expense of their own people’s freedoms.

The hatred is clearly a one-sided affair. Israelis are constantly being attacked by thugs and terrorists and the world continues to condemn the victim: Israel.