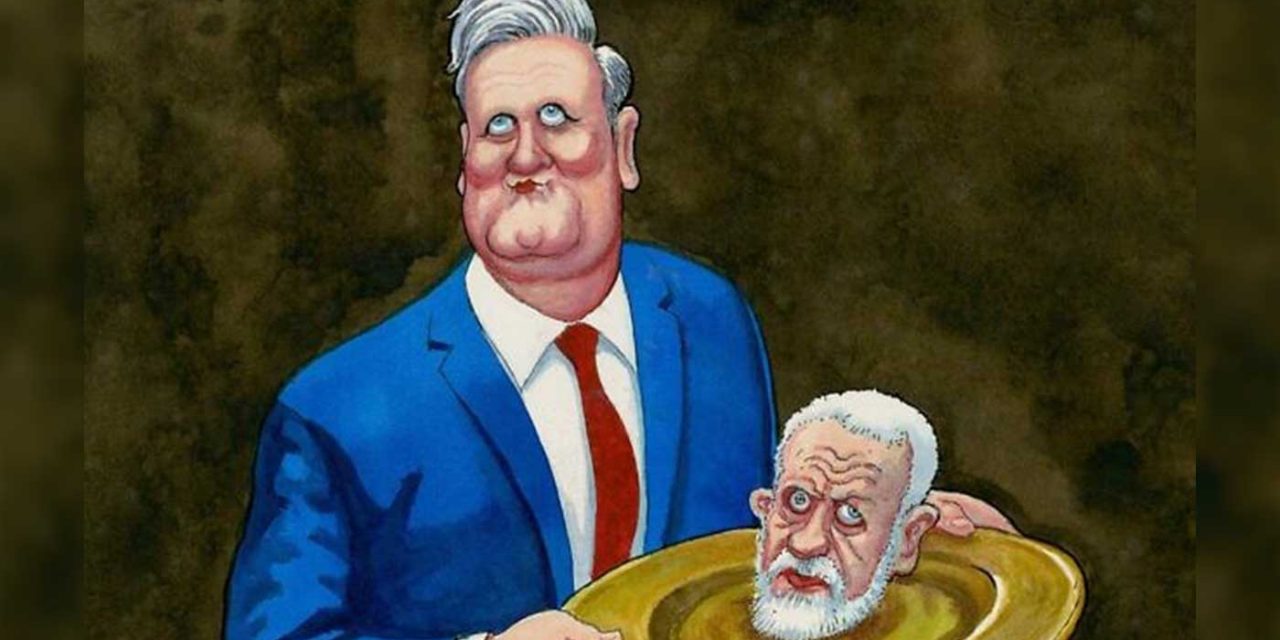 The Guardian has found itself in hot water for publishing a cartoon that depicts Labour leader Keir Starmer holding a golden platter with Jeremy Corbyn’s decapitated head on it.

The artist draws his inspiration for the cartoon from a painting of the Jewish Biblical character Salome carrying the head of John the Baptist. With some saying this reveals anti-Semitic undertones from the artist who has previously been accused of anti-Semitism.

It is also seen as insensitive due to recent beheadings in France, including of Christians.

The times of Israel reports:

The UK’s Guardian newspaper came under fire on Friday for publishing a cartoon portraying Labour Party leader Kier Starmer holding up Jeremy Corbyn’s severed head on a golden plate, a day after Corbyn was suspended from the party following his response to a damning government watchdog report that found Labour broke equality laws in its handling of anti-Semitism complaints under his leadership.

The cartoon, by Steve Bell, was criticized for being both anti-Semitic and insensitive, coming the day after a woman was beheaded and two others were killed in an Islamist terror attack in France, and a week after a French teacher was beheaded after showing his class cartoons of the Prophet Mohammad.

The newspaper said it had received several complaints and was looking into them.

“The Steve Bell cartoon published today portrays his observation on the recent events in the Labour Party,” a spokesperson for the Guardian told the Jewish Chronicle. “Some complaints have been received which the readers’ editor is looking into.”

Several social media users who saw the cartoon on Twitter said they had reported it to the platform as an instance of “race hate,” the Daily Mail reported. It also quoted the Labour peer Lord Andrew Adonis saying “Today’s Guardian cartoon by Steve Bell is repellent.”

Steve Bell has an absolute right to draw that cartoon of Corbyn as John the Baptist.

The Guardian has an absolute right to publish it.

The rest of us have the right to tell them it is monstrous and brings shame on the paper.

Bell wrote “After Caravaggio” on the side of the drawing, a reference to its inspiration.

Caravaggio’s painting “Salome with the Head of Saint John the Baptist” is one of the most famous depictions of the event described in the New Testament when Judean King Herod had John the Baptist killed at the request of his stepdaughter Salome.

Pleased at her dancing at a party, a drunken Herod had promised her any reward, up to half his kingdom. But on the advice of her mother, she demanded the head of Jesus’s mentor.

The cartoon was denounced by some critics as an attempt to portray Corbyn as a Christian martyr, with Starmer doing the bidding of the Jews.

Bell has been accused of using anti-Semitic tropes in several previous cartoons, including one of Prime Minister Netanyahu acting as a puppet master for Brtish politicians. He denied the cartoon was anti-Semitic. Last year, two of his cartoons nixed by the Guardian were raffled off at a fringe event at the Labour Party Conference.