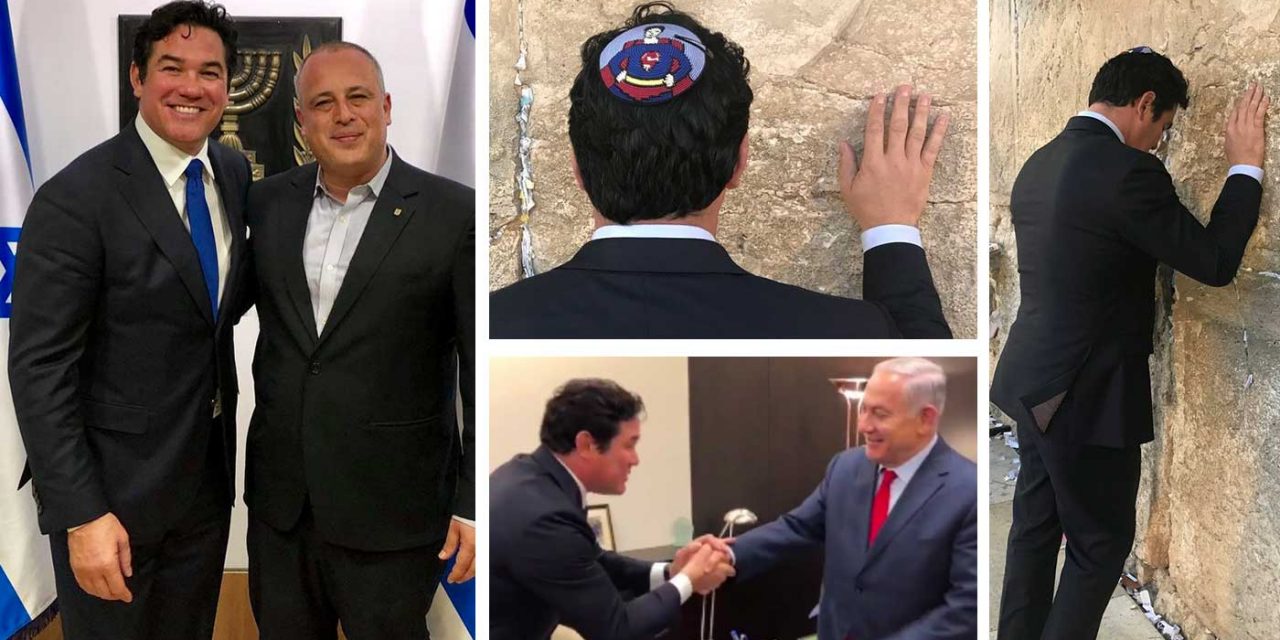 “Times change. I’ve changed. Now there’s plenty I can do. I only pray that will be enough.” – Superman (Man of Steel #57)

American Actor, Dean Cain, better known for his role as Clark Kent/Superman in the 1990’s television series, “The New Adventures of Superman” has visited Israel, Jordan and Armenia this week.

Praying for peace in the world and a better future with acclaimed actor @RealDeanCain, best known for his role as Superman in Lois & Clark at the Western Wall, Jerusalem, Israel today pic.twitter.com/evMKuGpdgo

Upon his arrival in Israel’s capital, he humorously tweeted, “Just arrived in #Jerusalem, but @netanyahu already had things under control!”

Just arrived in #Jerusalem, but @netanyahu already had things under control! 🇮🇱https://t.co/2XKa7Zrqhu

In Israel’s capital Cain met Prime Minister Netanyahu and showed himself very honoured to be able to visit the “real Superman”.

In return, PM Netanyahu posted on Facebook, “Superman visited my office this evening. Bad timing though. We solved everything right before he arrived.”

“Superman” also had the opportunity to visit the Knesset and was hosted by Zionist Union MK, Hilik Bar.

My friend @RealDeanCain , it was a huge honor to host you today at the Israeli Parliament, the @KnessetIL ! Everyone here hugged you, as you are hugging Israel every day! 🇮🇱 you are always welcome! pic.twitter.com/K46XzF8SRy

Together with us, Superman @RealDeanCain and the Batman @NirBarkat, the State Of Israel is now officially INVINCIBLE! pic.twitter.com/nd7CpnAbyA

On top of meeting Israeli politicians, the main point of his trip was to visit the holy sites.

In an interview, Cain said, “Israel is all I’ve imagined and more! Such a beautiful country, wonderful people and vibrant democracy. I’ve not yet had a chance to see all the country and deeply look forward to the rest of my time here and I’m sure I’ll be back again soon. For me the most moving is being able to share this visit with my son Christopher, to walk the streets that Kings and Prophets walked, share this history with him as well as show him how much a country can build and succeed in just 70 years.”

Before visiting Israel, Dean and his son went camping in the Jordan desert and visited more historical and holy sites, showing his deep spiritual connection with the land.

We sat on #ElijahsHill Listening to the wind through the reeds…just a few feet from the cave of John the Baptist… #Jordan 🇯🇴https://t.co/kTRZTtzEjj
I encourage everyone to do this, if you’re lucky enough to travel here. pic.twitter.com/RuBptg56GC

Other AMAZING places to visit in Jordan 🇯🇴 #Petra pic.twitter.com/LoxdnWthBE

My son and I praying at the exact spot where Jesus was baptized by John the Baptist. https://t.co/RWC9OqBI72
In the Kingdom of Jordan. 🇯🇴
Simply Incredible. One of the most holy sites on the planet. #Blessed 🙏🏼 pic.twitter.com/LYbySfszAy

Amazingly, the main reason for his visit to the region was to visit Armenia. There Dean Cain was awarded the “Order of Armenia” by the Armenian President for a documentary he produced highlighting the Armenian Genocide and countering the lies and denial surrounding it.

Incredible trip to #Armenia 🇦🇲 So honored and humbled to receive the Order of Armenia from the President. So happy to have my son with me. @ArchofDenial #ArmenianGenocide #NeverAgain pic.twitter.com/fmC6sMHyMB

When asked about his religion, Den has said in the past, “I don’t really go down one path. I wouldn’t call myself a Buddhist, or a Catholic or a Christian or a Muslim, or Jewish. I couldn’t put myself into any organized faith. But when I was flying over Iraq in 2005 being shot at while visiting our soldiers, you better believe I was praying to God. When my son gets sick, I’ll have my own personal conversations with God. For me it is a very personal sort of relationship in that sense. I just live and let live and live my life pretty much according to the Golden Rule. And it turns out well for me”.

Whilst Dean Cain may not claim to be any religion, it is telling that he visited the main Jewish and Christian sites during his journey.

In 2014 the actor starred in the Christian movie God’s Not Dead. Which featured a strong evangelical message. Dean Cain has been a long-time friend and supporter of Israel and is regularly featured on Fox News to give his views on current events.