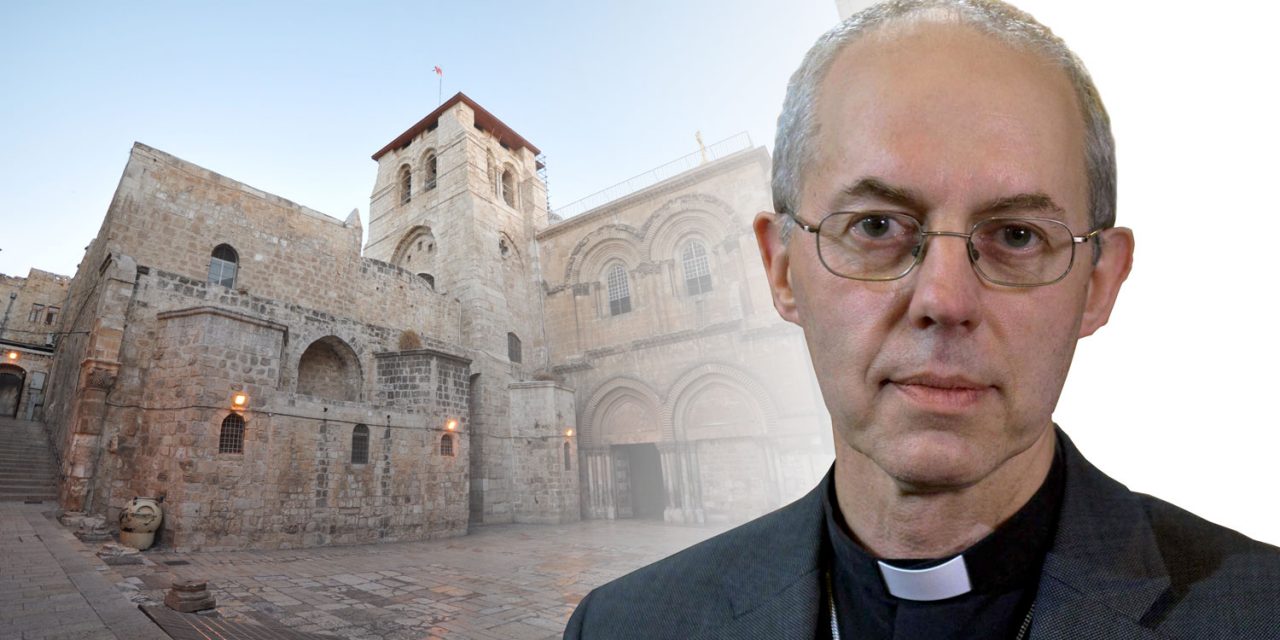 We invite you to join CUFI in giving a Christian response to misleading and inaccurate comments made by Archbishop Justin Welby regarding the recent protest by the Church of the Holy Sepulchre.

Statements by Archbishop Welby claim that Israel is taxing Jerusalem’s churches and holy sites. However, the dispute is not about the churches being taxed, but rather establishments owned by the church, such as hospitals, schools, hotels and other businesses.

The failure to accurately present the facts sadly led to a bias against Israel and even a manifestation of antisemitism on social media.

You may like to use the wording below, sending to [email protected] . Please remember to add your own salutation and please consider copying-in CUFI using [email protected] so we can measure the response. Thank you!

I am writing to you today as a Christian, supporter of Israel and friend of CUFI and would like to express my concerns over your handling of the situation surrounding the Church of the Holy Sepulchre.

As you know, Israel is the only place in the Middle East where the Christian community is thriving. While Christian persecution sadly grips the region, Christians are free to live and worship in safety and peace in Israel. Jerusalem, under Israeli sovereignty, allows religious freedom for all within its walls; something that the Holy City has not experienced until Israel’s rebirth.

The Bible tells us in Ezekiel that God will make Jerusalem a “cup of drunkenness” to the nations. This has been no more obvious than in the last few months with how nations and global political bodies have treated Israel. They have worked against God’s Biblical covenant to the Jewish people. As a Church we must be careful that we ourselves are not consuming of that cup.

Therefore we are writing to you in Christian love to address our concerns with the manner in which the issue of the Church of the Holy Sepulchre protest has been addressed.

The statements on your social media and on your website claim that Israel is taxing Jerusalem’s churches and holy sites and you spoke out strongly about this. However, the dispute is not about the churches being taxed, but rather establishments owned by the church, such as hospitals, schools, hotels and other businesses.

The handling of the situation by Church leaders has instead added fuel to the fire and incited hatred against Israel and the Jewish people. An action the church should never be a part of.

When the Church of the Holy Sepulchre closed in protest, we feel this in itself was a move simply to evoke opposition to Israel, rather than address the situation. As predicted, media headlines demonised Israel, and worse, the enemies of Israel used the opportunity to spread their hatred. This was evidenced when the radical Islamic terrorist group, Hamas, called for a fresh intifada against Jews in order to “defend” the Church.

This is also in line with past comments of Palestinian President Mahmoud Abbas, who has previously “welcomed every drop of blood” in Jerusalem and claimed that the Church of the Holy Sepulchre was part of Palestine, and that they would not allow “Jews” to “defile it with their filthy feet”.

Moreover, Church leaders in Jerusalem alluded to antisemitic rhetoric in their recent protest. In front of cameras, the Muslim custodian of the church key blamed the “Jewish government” while Christian leaders gathered in front of the church doors saying the way Christians were being treated “reminds us all of laws of a similar nature which were enacted against the Jews during dark periods in Europe”.

Unfortunately, the statement you issued alongside Cardinal Vincent Nichols used wording that didn’t present the full picture and also didn’t acknowledge that Prime Minister Netanyahu had already intervened before your letter was sent. For example, the headline in your statement refers to the “Holy Sites”, which is untrue as the taxation was relating only to commercial property belonging to the Church.

We feel that this inaccuracy was unhelpful in representing the matter and was used by some to further their antisemitic agenda.  For example, your own Facebook post on the issue contained comments by followers associating Zionism with Nazism. To suggest that the way the Jewish State of Israel treats its Christian community (by far the best in the Middle East) is likened to Nazi brutality against the Jews (the worst genocide in history) is nothing short of antisemitism.

This falls in line with the British government’s adopted definition of antisemitism which states as such. And we believe that antisemitism, hatred of the Jewish people, is in itself anti-God.

In February, you wrote a letter to Christians United for Israel stating that the Church of England is active and committed to “stand alongside the Jewish community in opposing antisemitism in whatever guise it manifests itself today and in the future”.

We are very grateful for this commitment, however, we are concerned that in this instance the misleading information has been used for antisemitic purposes as a result.

We are therefore asking you in future to refrain from using a heavy hand in dealing with such a sensitive issue as this and instead encourage you to take an approach that will bring about a peaceful resolution.

We also ask that more accurate statements are issued regarding this or similar issues in future on your Twitter and Facebook pages, as well as on your website. We also kindly ask you to remove antisemitic comments from your Facebook page.

We greatly appreciate your role as the head of the Church of England and the strong stand you take in combatting hatred towards all people. On this occasion we feel your statement fell short of the high standards you have set and we hope that you will take our concerns into consideration.