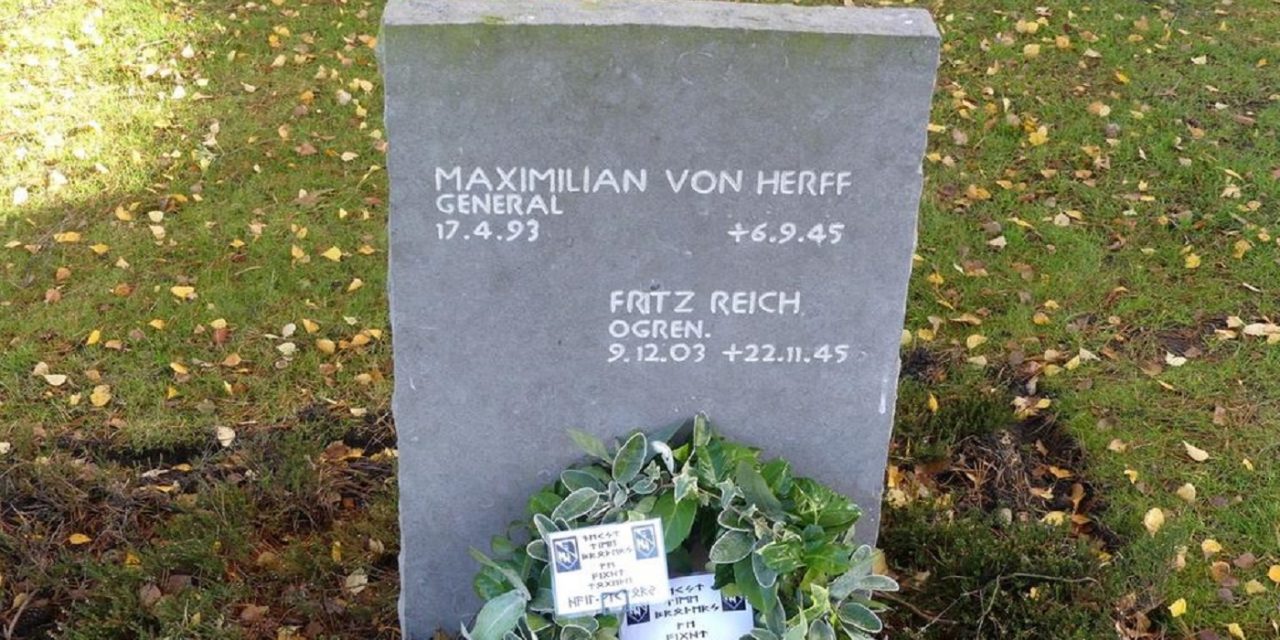 A Jewish woman who attended a Remembrance Day service to mark Anglo-German reconciliation was shocked to discover a wreath had been laid on the grave of a Nazi general.

SS General Maximilian von Herff, who is buried at the German War Cemetery, at Cannock Chase, Staffordshire, ran the personal office of Heinrich Himmler, who was head of the SS and a chief architect of the genocide against the Jews.

SS General von Herff’s simple grave reveals nothing of his part in the Holocaust but the woman attending the service was “horrified” to discover that the wreath, which had with Nazi symbols, had been placed on it.

The symbols represent the Nazi Werwolf resistance, set up in 1944 to establish active forces behind enemy lines as the Allies pushed through Germany.

The wreath was also accompanied by text written in Anglo-Saxon runes which contained Nazi slogans.

“I was shocked to see it,” said the woman, who wanted to remain anonymous.

“I know neo-Nazis use all these Nordic symbols. We were just horrified.”

The text on the wreath reads: “Next time brothers we fight together Hail victory.”

Karen Pollock, chief executive of the Holocaust Educational Trust said: “It’s sickening that on Remembrance Sunday and shortly after we marked the 80th anniversary of Kristallnacht, an individual or group felt it appropriate to place a wreath on the grave of high-ranking Nazi, Maximilian von Herff – Himmler’s chief of staff.

“This is the sort of stunt we expect from the far-right and it is pathetic and deplorable.”

The woman, who is of German Jewish heritage, was also shocked to discover another wreath at the cemetery which was decorated in black ribbon and bore the insignia of a group which commemorates the soldiers of an SS division.

This wreath was laid alongside many others at the Tomb of the Unknown Soldier. It bore the symbol of the 1st SS Panzer Division, which was linked to war crimes, including the massacre of hundreds of American prisoners of war.

“When we pointed it out to organisers later on, I think the wreaths were removed but it is still pretty awful,” she said.

Keith Hender, chairman of the Penkridge Ango-German Remembrance Day Association which organised the service, said: “As chairman of the organisers for the last six years, this is the first time I have been informed or indeed seen wreaths of this nature on General von Herff’s grave.

“The wreath from the Panzer Division has been placed on the Tomb of the Unknown Soldier in past years but has always been removed at the earliest opportunity with the knowledge of the German Embassy.”