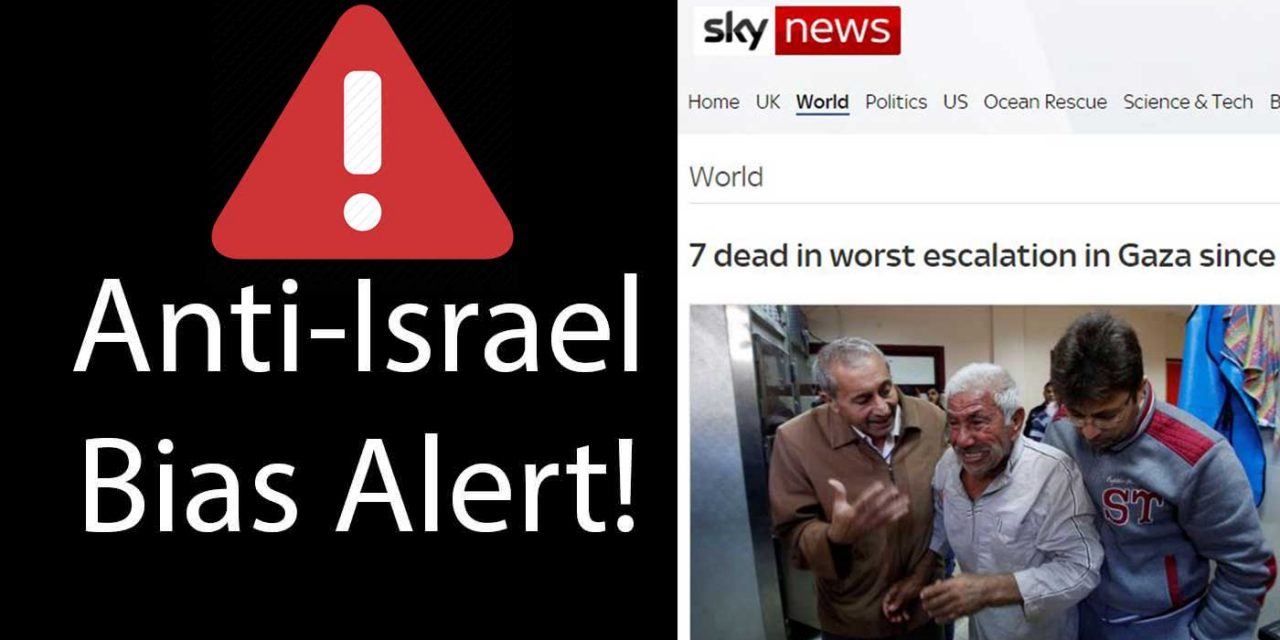 Sky News has once again shown its anti-Israel bias by focusing on Israel’s response to terrorism, rather than the mass terrorism committed by Hamas against Israeli civilians.

On Monday, more than 460 rockets and mortars were fired by Hamas terrorists into Israeli civilian populations.

The Iron Dome missile defence system intercepted over 100 of them. Most of the rest landed in open fields, but dozens landed inside Israeli cities and towns, killing one person, injuring dozens more and causing significant property damage.

To clarify, these rockets were fired by terrorists in Gaza towards civilians in Israel.

In response to the rocket and mortar attacks, the Israeli military says it targeted approximately 160 sites in the Gaza Strip connected to the Hamas and Palestinian Islamic Jihad terror groups, including four facilities that the army designated as “key strategic assets.”

Sky News, one of the main news broadcasters in the United Kingdom, decided that instead of reporting the large-scale terror attacks against Israel,  Britain’s close ally, they would instead paint the terrorists (who are proscribed in Britain and who are attacking civilians) as the victims.

On the homepage of the world news section of the Sky News website, the main article was headlined, “7 dead in worst escalation in Gaza since 2014”. 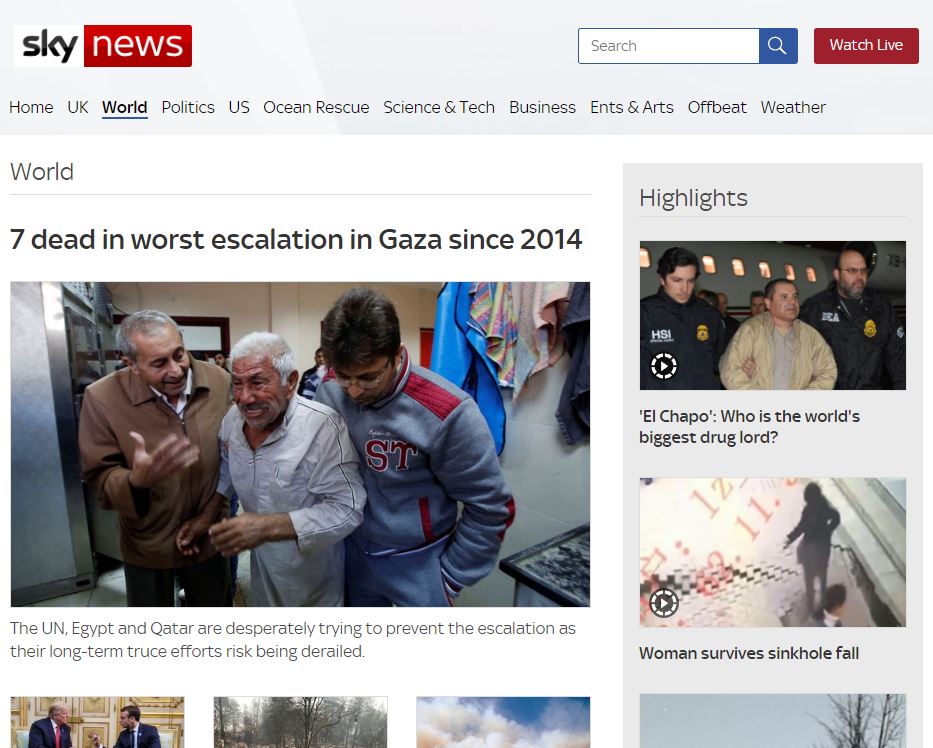 The image used was a grieving Palestinian father whose son had reportedly been killed in an Israeli airstrike.

Clicking on the article, readers are told that “seven people have been killed in a day in the worst escalation of violence Gaza has seen since the 2014 war.”

They are then told that the total in Gaza killed is six, that two of the men are confirmed terrorists and that Israel carried out a strike on a militant who was firing projectiles.

It is not until the fourth paragraph that the article explains that a civilian in Israel was killed, which makes up the total figure of the headline.

Readers are then told that the fresh cross-border attacks were triggered by a “botched Israeli undercover raid into the Gaza Strip on Sunday” where “One Hamas commander and six other gunman (sic) were killed, while an Israeli commander also died in the raid”.

This is interesting wording because there is a campaign against the Guardian by some anti-Israel activists at the present moment because they described the Israeli as being “killed” and the seven Palestinians as having “died” in one of their headlines. There is outrage because those activists are claiming the Guardian cares more for the Israeli than the Palestinians, however, Sky News appears to have done the opposite.

Regardless of whether “killed” or “died” should be used for either, it is important to point out that the Palestinians who were killed were all terrorists. Hamas themselves released an image of the commander and six fighters armed with weapons and wearing Hamas military gear.

It is not until the eighth paragraph of Sky News’s article, however, that we learn the extent of Hamas’s terrorism when it describes “About 400 rockets and mortars have been launched from Gaza since the current round began on Monday…”

You see, Israel on Sunday killed a terrorist commander and six other terrorist militants who were armed with weapons and shooting at them. Hamas, on the other hand, is attacking defenceless Israeli civilians who are sleeping in their homes.

Therefore, when Hamas carried out its terror attacks against Israeli civilians, Israel responded by attacking Hamas military targets. And six Palestinians have been killed, two of which are confirmed to be terrorists and the other four are unknown whether they are terrorists at this time, but there is a possibility that some more of them are.

In Israel, at least 20 people have been wounded, several seriously.

At the time of writing the article, there were more than 50 confirmed Israeli casualties, including three critically injured and one dead. The number is now higher.

The article’s next sentence reads:

Following the Palestinian deaths the armed wing of Hamas threatened to step up its attacks and fire rockets further north towards the Israeli cities of Ashdod and Beersheeba if Israel did not cease fire.

Straight after hearing about the Israeli casualties, which is underplayed in the article, the attention is quickly diverted back to the Palestinians.

We don’t hear an official line from Israel on the situation or what Israel’s response will be to further terrorism. We don’t hear of the international condemnation there has been against Hamas. Instead, the journalist quickly turns the reader’s attention back to the “Palestinian deaths” and how it is up to Israel to stop the violence.

The author even uses the whole “armed wing” argument as if Hamas has separate entities just like Hezbollah.

Hamas political chief Ismail Haniyeh said in a brief statement on Tuesday that the “Palestinian resistance defended its people and themselves against the Israeli aggression”, noting that the Palestinian people, as usual, “embrace the resistance with much patience and pride.”

This is their “political” chief, talking about the military actions of the organisation, who said they “responded by shelling the Israeli settlements”.

This type of rhetoric shows us exactly what Hamas is and what Israel is dealing with. A terrorist organisation that seeks the destruction of Israel.

All of the locations that were hit by Hamas rockets are within Israel. They are within the internationally recognised borders which even the Palestinians have agreed are part of Israel. However, Hamas sees these Israeli towns as “settlements”. Why? Because Hamas sees all of Israel as “Palestine” and deems that all of “Palestine” must be liberated. Therefore they do not seek peace with Israel, they want to wipe Israel off the map and take the land for themselves.

Unfortunately, publications like Sky News are publishing articles that skew the opinion of the reader into thinking that Israel is the attacker and Hamas, the terrorist organisation, are the victims.

Sky News can argue that it gave all the information needed to be “unbiased”, but subtle changes to their story can drastically affect the way people understand the news they are reading.

More than this, however, is the fact that in this social media age more people are simply reading headlines and basing their opinion on that without reading the entire article. At best, most people will only read a couple of sentences or a few paragraphs before they move on to the next article. The structure of an article is very important.

This is the kind of biased reporting may seem subtle, but over time it can lead to dangerous attitudes against Israel that can lead to hatred. And organisations like Sky News have an obligation to avoid spreading this misinformation.