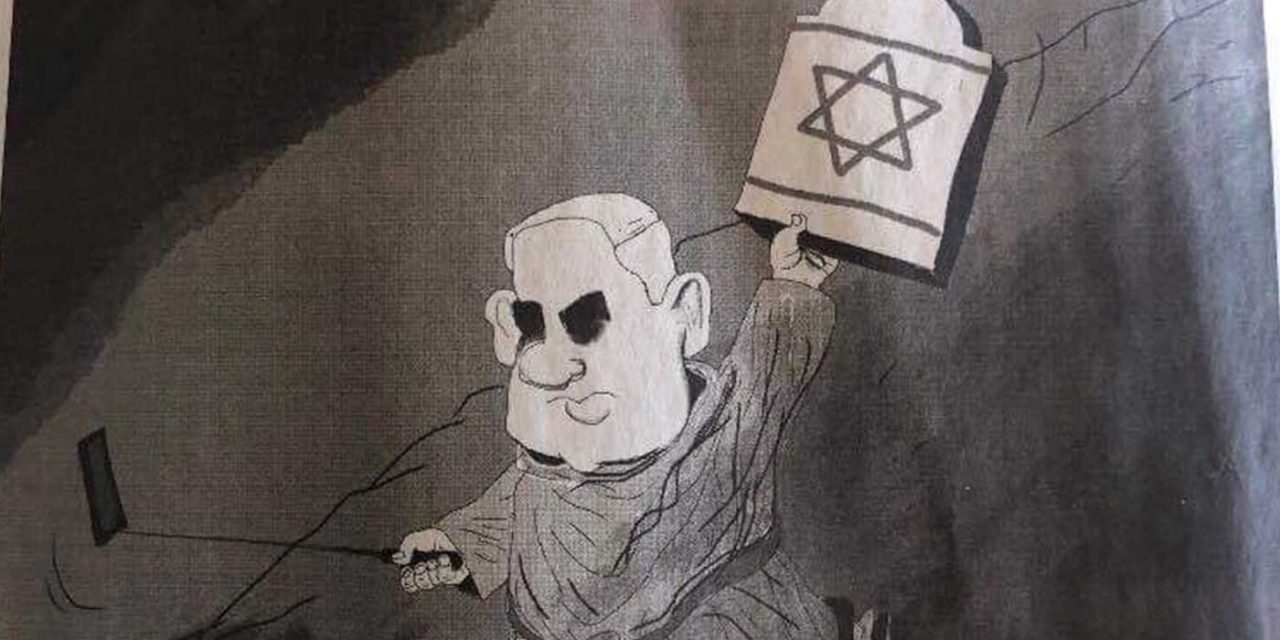 The New York Times has been found to have published an anti-Semitic cartoon in the pages of its international edition for the second time in recent days, resulting in the newspaper ending its relationship with the syndication service that supplied the cartoons.

Jewish and pro-Israel groups have condemned The New York Times for publishing anti-Semitic cartoons in its international edition both last week and over the weekend.

Thursday’s cartoon featured U.S. President Donald Trump wearing a kippah, sporting dark-tinted glasses and being led by a dog with the face of Prime Minister Benjamin Netanyahu with a large blue Star of David hanging from its collar.

The weekend image by Norwegian cartoonist Roar Hagen depicts Prime Minister Benjamin Netanyahu with sinister eyes taking a picture of himself with a selfie-stick, carrying in what appears to be an empty desert with a tablet featuring the Israeli flag painted on it.

The latest anti-Semitic image was posted on the same day as the San Diego synagogue shooting, on the final day of Passover (Pesach).

This is insensitive, inappropriate, and offensive. It shows once again that the @NYTimes needs to educate its staff about #antiSemitism. We call on them to take immediate action. pic.twitter.com/6HBFxduKP7

A protest rally was held outside the offices of the New York Times on Monday, with speakers including Alan Dershowitz.

Dershowitz, a former Harvard law professor and major Israel advocate, spoke at the rally and said the cartoon “is very painful for me.”

“I have written many, many dozens articles for The New York Times… I’ve been a strong supporter of The New York Times,” he said. “But when I saw that cartoon yesterday, it just put me in mind of a very dark time in Jewish history. And I asked myself, ‘How could it have happened?’”

He added: “The only good thing The New York Times has ever done for the Jewish people is that it put a lie to the notion that the Jews control the media and use it to support their own interests.”

The Times announced Monday evening that it had ended its relationship with the syndication service that supplied the cartoon.

Times columnist Bret Stephens, who is Jewish, said Monday at a panel discussion at the New York University Global Center that writing the op-ed in response to the cartoon was an “easy” choice.

“The moment I saw the cartoon, I realized I’m either going to denounce it or feel ashamed of myself,” he said.

Stephens also said “it was easy because the senior leadership at the Times — the editorial page editor James Bennet, and people, in fact, more senior to him — were horrified by the publication of the cartoon. It took them by surprise.”