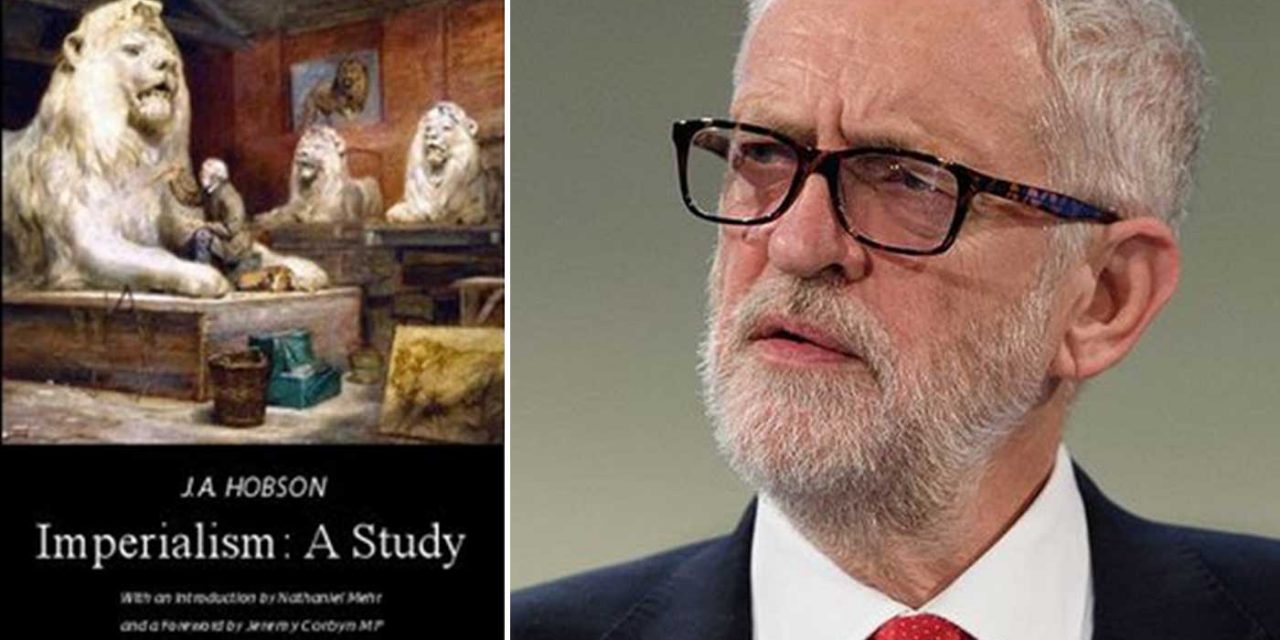 Labour leader Jeremy Corbyn has once again found himself in hot water over his association with anti-Semites, this time writing the foreword to the relaunch of J A Hobson’s Imperialism, a book deemed to be anti-Semitic and written by an author who espoused blatantly anti-Semitic views.

Corbyn described the book as a “great tome” and praised the author’s analysis as being “both correct and prescient”.

So not only did Corbyn write the intro, he was invited to speak at the book launch in January 2011… does anyone have a tape or video? Sadly does not appear to be online anywhere. pic.twitter.com/2DPov2Vvbn

What are Hobson’s views that Corbyn is so keen to endorse? As Guido Fawkes points out:

Hobson first sets out his views in his book of two years’ earlier on The War in South Africa, which he blames on:

“a small group of international financiers, chiefly German in origin and Jewish in race… The rich and powerful liquor trade… is entirely in the hands of Jews… the stock exchange is needless to say, mostly Jewish… the press of Johannesburg is chiefly their property… we are fighting in order to place a small international oligarchy of mine owners and speculators in power at Pretoria.”

Hobson builds on these theories in Imperialism itself, blaming the “house of Rothschild” for all European wars and railing against “men of a single and peculiar race” who in his view are “are in a unique position to control the policy of nations” and “harpies who suck their gains from every new forced expenditure and every sudden disturbance of public credit”:

“United by the strongest bonds of organisation, always in closest and quickest touch with one as other, situated in the very heart of the business capital of every state, controlled, so far as Europe is concerned, by men of a single and peculiar race, who have behind them many centuries of financial experience, they are in a unique position to control the policy of nations.”

“…there is not a war, a revolution, an anarchist assassination, or any other public shock, which is not gainful to these men; they are harpies who suck their gains from every new forced expenditure and every sudden disturbance of public credit.”

Enter Jeremy Corbyn eight years ago. Corbyn is gushing with praise for Hobson’s analysis which he describes as “both correct and prescient”:

“Hobson’s railing against the commercial interests that fuel the role of the popular press with tales of imperial might, that then lead on to racist caricatures of African and Asian peoples, was both correct and prescient.”

Corbyn also describes Hobson as “brilliant” for supposedly exposing the “pressures that were hard at work” behind imperialist expansion:

“…what is brilliant, and very controversial at the time, is his analysis of the pressures that were hard at work in pushing for a vast national effort, in grabbing new outposts of Empire on distant islands and shores.”

These views were not just “very controversial at the time”, they amount to an entire worldview based around the classic anti-Semitic conspiracy theory that Jewish bankers and the “house of Rothschild” control world affairs for their own profit.

Labour has recently suspended members who have espoused “Rothschild conspiracies”, but when it comes to the Labour leader no such action will be taken.

Labour said in a statement: “Jeremy praised the Liberal Hobson’s century-old classic study of imperialism in Africa and Asia… Similarly to other books of its era, Hobson’s work contains outdated and offensive references and observations, and Jeremy completely rejects the antisemitic elements of his analysis.”

As we can see above, Corbyn was hardly showing his rejection of the anti-Semitic beliefs of the author when he wrote a glowing foreword.

Surprisingly, Rebecca Long-Bailey MP, who appeared on BBC Radio to defend Corbyn, admitted, “I haven’t read the forward or the book”. Despite this lack of knowledge, she tried to assure listeners that Corbyn was just “commenting in a wider political sense.”

The BBC host argued: “So it’s fine to quote someone who’s known as an anti-Semite, whose book is described as anti-Semitic, it’s fine to write a foreword saying ‘just put that all to one side shall we because he’s got some interesting things to say about capitalism’?”

Ms Long-Bailey responded: “Well it’s not right to support comments made by an anti-Semite, or to forward or condone them in any way and Jeremy hasn’t done that.

“But I think what he has done is written a forward to a book which I understand was about imperialism in a wider context and about the political thought of this individual.

“Not condoning it but commenting on the work itself. I don’t think Jeremy would be an advocate of the school of thought that certainly, that individual was perpetrating.”

However, this appears to be exactly what Corbyn has done. He endorsed the words of an anti-Semite.

As Labour MP Wes Streeting said, “My advice to any Labour MP today: refuse to defend Jeremy Corbyn lauding a book containing classic antisemitic tropes. If he wants to defend the indefensible he should go on the airwaves and defend himself. He has a responsibility to explain himself.”

However, even if Labour can skirt around the fact the author was anti-Semitic. They cannot hide from the fact that Corbyn was also endorsing other far-left/Marxist views (not for the first time) that are at odds with his party.

For example, the idea that NATO was a 'military reoccupation' of Europe. That US satellites were less free than Soviet ones during the Second World War. That the collapse of the Soviet bloc was a matter for regret, because it removed a counterweight to the US. pic.twitter.com/4aZl4bBRfL