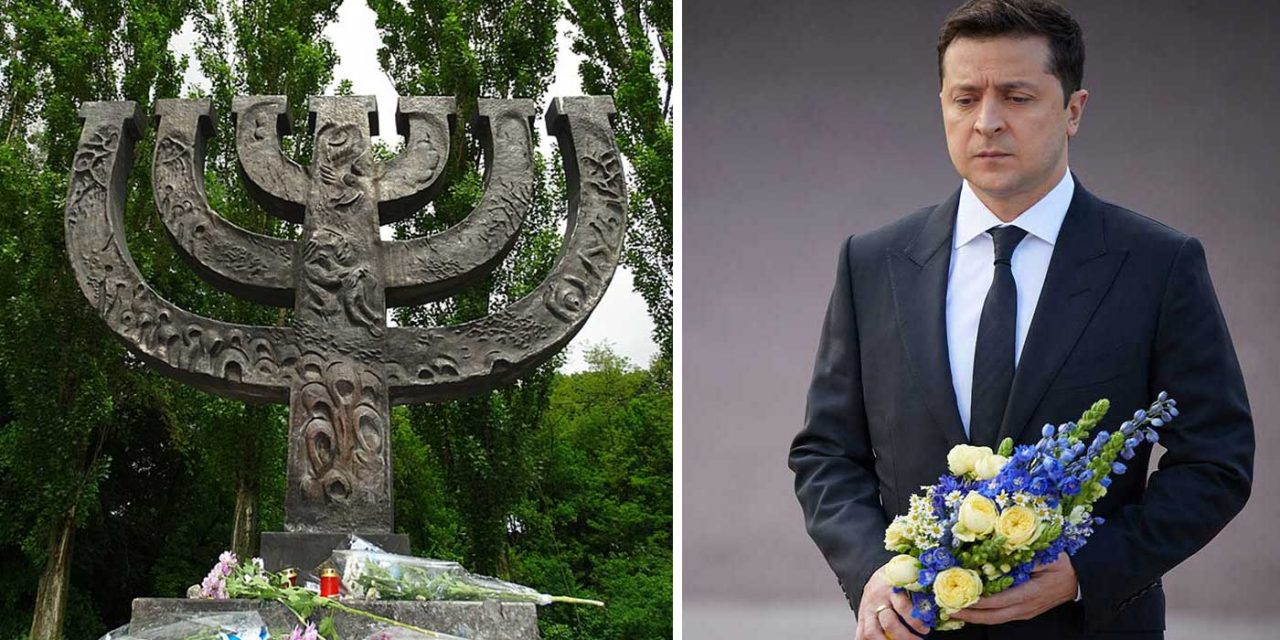 A Russian airstrike has damaged an important Ukrainian Holocaust memorial drawing condemnation from Jewish groups and adding insult to the antisemitic slurs against Ukraine’s Jewish president.

Putin’s attempts to paint Ukraine’s leaders as Nazis are particularly egregious when you consider that the Ukrainian president is himself Jewish. Most of President Zelensky’s grandfather’s family was killed during the war and last October he paid respects to the Jewish victims of the Holocaust by laying a wreath at the Babi Yar memorial.

The Babi Yar (Babyn Yar) memorial rests on a mass grave containing 34,000 Jewish men, women and children who were murdered on 29th and 30th September 1941. They were gunned down by Nazi troops in the wooded ravine of Babi Yar.

The Nazi’s occupied Kyiv at the time and this was one of the largest single massacres of the Jews during the Holocaust. In the years following, over 100,000 people were murdered there and an estimated 1.5 million of Ukraine’s pre-World War II Jewish population was killed during Holocaust.

Today, after the dust had settled on Babi Yar, President Zelensky was clearly outraged by what had occurred at the memorial.

“To the world: what is the point of saying ‘never again’ for 80 years, if the world stays silent when a bomb drops on the same site of Babyn Yar? At least 5 killed. History repeating,” Ukrainian President Volodymyr Zelensky said.

To the world: what is the point of saying «never again» for 80 years, if the world stays silent when a bomb drops on the same site of Babyn Yar? At least 5 killed. History repeating…

Andriy Yermik, the Ukrainian president’s chief of staff, added: “Once again, these barbarians are murdering the victims of Holocaust!”

The attack was an attempt by Russian forces to knock out communication broadcasts for the Ukrainians. There are reports a number of television stations will have disruption, but some are able to operate as normal.

At least five people were killed in the strike and five others were injured, Ukrainian emergency services said. It is unclear what damage the memorial has sustained.

The Jewish community has spoken out condemning the strike.

Natan Sharansky, the chairman of the Babi Yar Holocaust Memorial Center and former head of the Jewish Agency, said in a statement: “[Russian President Vladimir] Putin seeking to distort and manipulate the Holocaust to justify an illegal invasion of a sovereign democratic country is utterly abhorrent. It is symbolic that he starts attacking Kyiv by bombing the site of Babi Yar, the biggest of Nazi massacres.”

“We, at the Babi Yar Holocaust Memorial Center, built on Europe’s largest mass grave of the Holocaust, work to preserve historical memory following decades of Soviet suppression of historical truth, so that the evils of the past can never be repeated. We must not allow the truth to — once again — become the victim of war,” said Sharansky.

Holocaust Educational Trust UK said: “Our thoughts are with the Ukrainian people under violent attack. It is desperately sad to see the Babyn Yar memorial, the site of one of the bloodiest massacres of the Holocaust, bombed in yet another brutal act of aggression and inhumanity by Putin’s forces.

“For him to use the excuse of “denazification” to mount the invasions is grotesque.”

The Auschwitz Memorial Museum condemned the attack, saying: “It’s hard to expect the Russian army to respect the dead if it is not capable of respecting human lives.”

He said: “It is just a few months ago the world gathered to remember the 80th anniversary of the murder of 33,771 Jew in a ravine in Kyiv. The mass murder was an act if barbarism. No one believed Putin’s deranged claim that he was removing Nazis from Ukraine. This latest evidence of Russian aggression shows Putin in his true colours.”

It was only last year, in October 2021, that Ukraine marked the 80th anniversary of the Babi Yar massacre of Jews during the Holocaust.

Below is a video from the 80th anniversary.