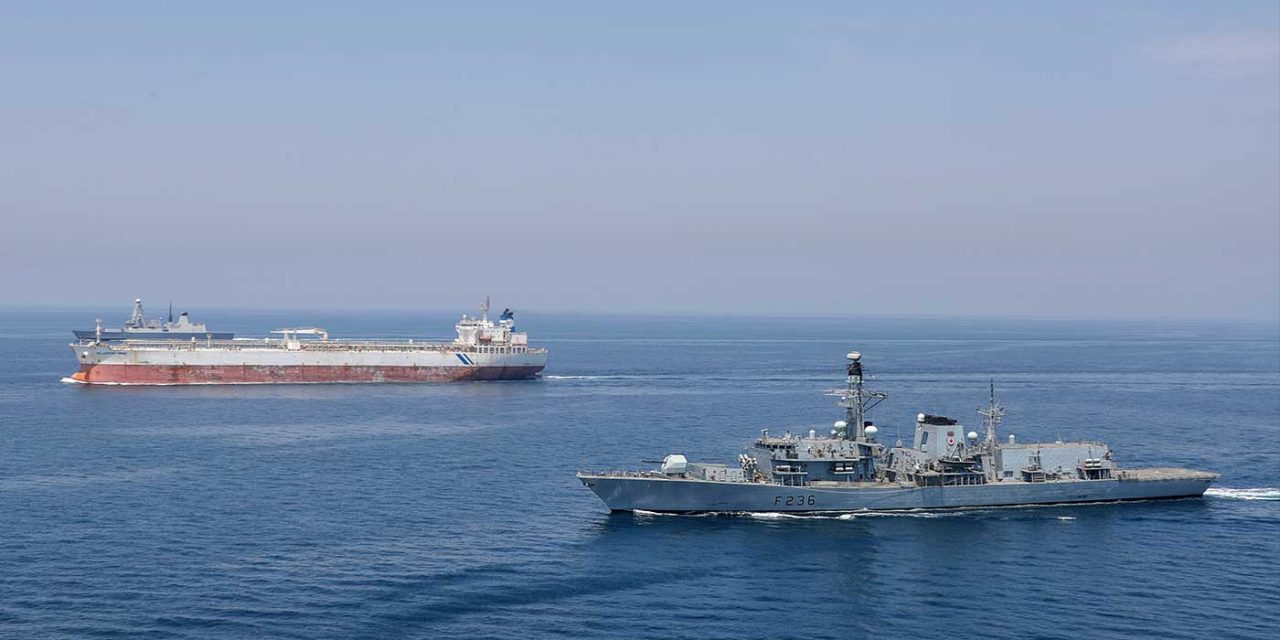 The Royal Navy website reports that nearly six million tonnes of British shipping has been safeguarded by the Royal Navy in the first two months of protecting vessels from unwanted aggression.

Nearly 90 British merchant ships were safely shepherded through the Strait of Hormuz by frigate HMS Montrose and destroyer HMS Duncan during a hectic two months responding to threats by Tehran.

Montrose passed through the narrow gateway to the Gulf 38 times – each time observed by Iranian forces, broadcasting on radios, with drones watching every move overhead and boats often approaching with intent.

The Plymouth-based frigate, which completed the first phase of its escort duties late last week, was forced to fire flares on more than a dozen occasions as she warned off the Iranian forces.

The ship prevented the Iranians seizing the British Heritage, performing a ‘handbrake turn’ at full speed and training all her guns on the tanker’s harassers.

But just nine days later Iranian troops succeeded in hijacking the Stena Impero while Montrose was helping to protect other shipping half an hour away.

Since then tensions have lessened. But on her final patrol before a period of maintenance and changeover of crew in Bahrain, Montrose – and Duncan – found themselves spied on by drones and an Iranian patrol craft as the two Royal Navy warships accompanied tankers Hellespont Pride and Moonbeam and the container ship Brighton.

The frigate’s crew say the two months on patrol in the strait – 64 days with the ship’s company working around the clock with few breaks – have been tough but hugely satisfying.

Aside from the Stena Impero incident, Montrose alone was responsible for ensuring 60 British ships – carrying more than five million tonnes of oil, liquid natural gas, cars and other commodities – reached their destinations safely.

Commander Will King said the deployment had been “intense but also hugely rewarding. We have been probed by the Iranians daily – 115 interactions in all. The numbers – 38 transits of the strait, 60 British vessels accompanied, over five million tonnes of UK shipping protected – speak for themselves.”

Despite such threats, Montrose’s sailors have repeatedly sought to prevent a tense situation escalating – so far the only thing fired have been warning flares as they drove away Iranian boats.

Thirty-year-old Leading Physical Trainer Damon Bell from Carlisle was at the ship’s wheel when the attackers were driven away from the British Heritage.

“Protecting the British Heritage was probably the best thing I have ever done. Doing what was effectively a handbrake turn around the back of a tanker – that was a classy move.

“Before we came out here, there was endless training and the guys were getting a bit fed up. But then we came here, did a real job, made a difference, there’s a meaning to what we’re doing, and you realise that the training works.”

Chief Petty Officer Gordon Baillie, Montrose’s operations room manager, added: “There are not many people who have taken part in a deployment this intense, but this is what we train for.

“Everyone has been focused on the job in hand, they care deeply about what is happening and have shown calm professionalism.”

Commander King likened the task when Montrose began the escorting mission as “policing an area twice the size of Wales with a single squad car”.

Since then HMS Duncan has arrived, while HM Ships Kent and Defender arrive in the Gulf this month to support the maritime security operation while Britain builds an international coalition to guarantee the free movement of shipping through the Strait of Hormuz.

“Both have worked tirelessly, 24 hours a day, seven days a week, in extremely hot and humid conditions, facing a high degree of threat, making sure British merchant shipping is safe. That they have done so is down to the quality of our men and women.

“The impact on the UK – and the world’s economy – if these six million tonnes had not got through doesn’t need underlining: about one third of the world’s natural gas and one sixth of the world’s oil pass through Hormuz.

“Our response is a direct result to the threat from Iran. If Iran sticks to international law and stops it aggressive action, there is no need for warships to be here in force.”

Commander King added: “The threat is there. And as long as it is, Royal Navy warships will be here to protect British shipping.”

The UK has accused the UN of downplaying "the scourge of antisemitism", voting against a UN Human Rights Council resolution that approved the notorious anti-Israel “Durban...
Read More

Sir David Amess MP tragically lost his life today after being stabbed while meeting with constituents in Leigh-on-Sea.While much will be said about Sir David Amess over the coming days,...
Read More

Iran has blamed 'the Zionist entity' for the killing of protesters that took place in Beirut on Thursday.The clashes in Beirut began in the largely Christian neighbourhood of Ain...
Read More

A church has made a 'terrible mistake' by burying the ashes of a notorious anti-Semite in the empty grave of a Jewish music professor. Last Friday, 48-year old neo-Nazi Henry...
Read More
Share
Tweet
Email
More
260 Shares