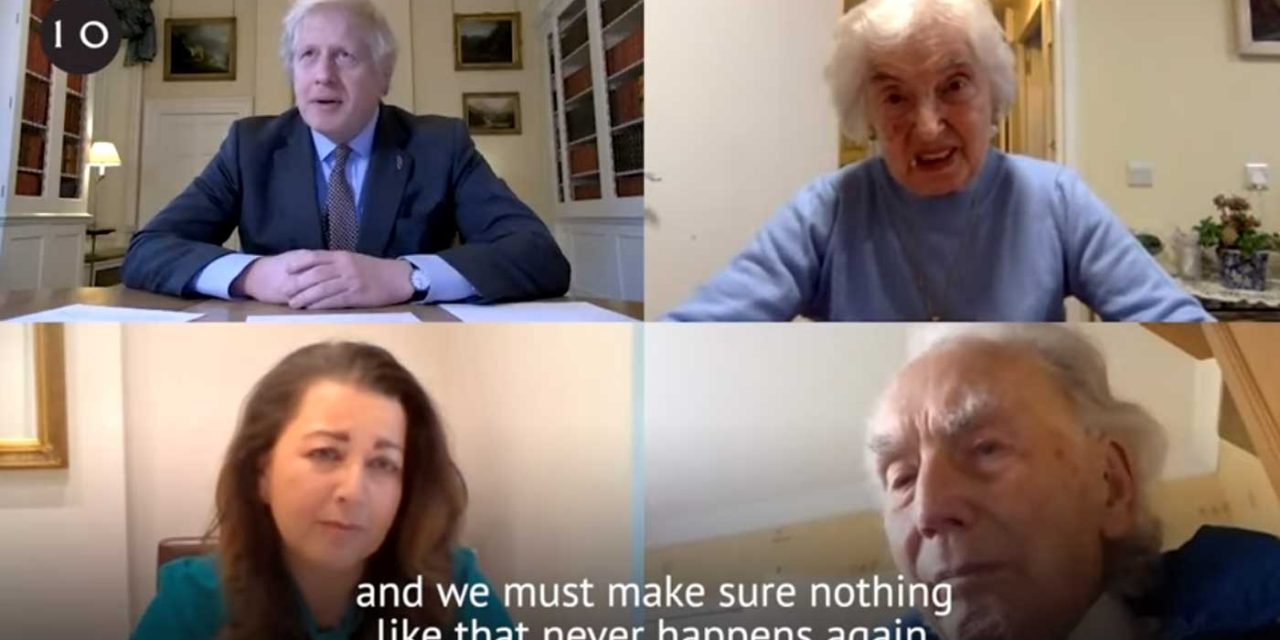 Prime Minister Boris Johnson this week remembered the Holocaust, speaking in the House of Commons and holding a virtual meeting with a Holocaust survivor and British soldier who liberated one of the death camps.

Mr Johnson held a video a virtual meeting with Renee Salt, a survivor of the Holocaust who was held in Bergen-Belsen death camp, and Ian Forsyth, a British soldier who liberated Bergen-Belson on 15 April 1945.

Renee explained that she was born in Poland in 1929. When Poland was invaded by the Nazis in 1939, Renee and her family were forced to live in the ghettos of Zduńska Wola and Łódź.

In 1944 Renee and her parents were taken by train to Auschwitz-Birkenau. On arrival, she was separated from her father, who she never saw again.

In March 1945, Renee and her mother were moved to Bergen-Belsen. They were liberated from the camp on 15th April 1945 by the British Army but Renee’s mother died in hospital 12 days after the liberation.

The Prime Minister was visibly moved by the stories he was hearing. You can watch the video below.

Also on Wednesday in the House of Commons, the Prime Minister took the opportunity during Prime Minister’s Questions to say a few words.

“Today on Holocaust Memorial Day I know that the whole house will want to join me in solemnly remembering the 6 million Jewish men, women and children murdered during the Holocaust and all other victims of Nazi persecution.

“Last week I had the privilege of hearing from Holocaust survivor Renee Salt and Ian Forsyth one of the last living British servicemen who liberated the camp at Bergen-Belsen. Their courage to share their testimonies must inspire us all never to forget the Holocaust and to fight against all forms of hatred and prejudice wherever they are found.”

Great to see The Prime Minister @BorisJohnson opening PMQs with words about #HolocaustMemorialDay and showing support with the HMD badge. Thank you to @Keir_Starmer who said he’ll be watching the UK Ceremony tonight and taking part in our #LightTheDarkness national moment at 8pm. pic.twitter.com/bwH48Ytj6H

Labour’s Keir Starmer, the leader of the opposition, also took the opportunity to remember those lost during those dark days.

Starmer began his statement “by joining the Prime Minister in his remarks during Holocaust Memorial Day. This evening I’ll be joining the UK ceremony and lighting a candle to remember the 6 million Jews murdered in the Holocaust along, of course, with the other genocides and persecutions that have taken place around the world.”

Holocaust Memorial Day takes place every year in the UK on 27th January and is a day to remember the six million Jewish men, women and children who were murdered by the Nazis during the Holocaust. There are also many others who were killed in the death camps of the Nazis.

At Christians United for Israel, we believe the memory of the Holocaust should never be forgotten. That’s why we are supporting the UK government’s plans to build a Holocaust Memorial in Westminster. Over 14,000 people have signed our petition in support of this important memorial. If you would like to add your voice, please sign here.