President Trump: “We must never ignore the vile poison of anti-Semitism or those who spread its venomous creed” 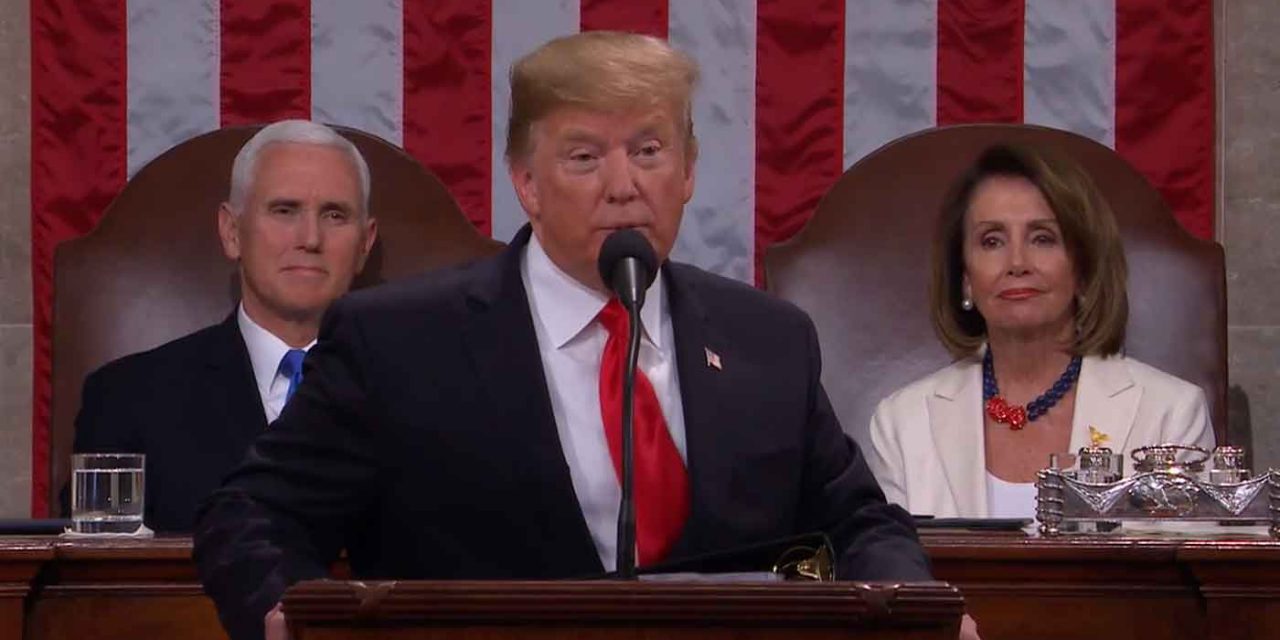 US President Donald Trump used part of his State of the Union speech Tuesday night to condemn Iran for its threats to wipe Israel off the map and vowed to battle anti-Semitism in whatever form it took. He also praised Holocaust survivors, World War II veterans and a police officer who saved Jews during the Pittsburgh synagogue shooting last year.

“My Administration has acted decisively to confront the world’s leading state sponsor of terror: the radical regime in Iran.

To ensure this corrupt dictatorship never acquires nuclear weapons, I withdrew the United States from the disastrous Iran nuclear deal.  And last fall, we put in place the toughest sanctions ever imposed on a country.

We will not avert our eyes from a regime that chants death to America and threatens genocide against the Jewish people.  We must never ignore the vile poison of anti-Semitism, or those who spread its venomous creed.  With one voice, we must confront this hatred anywhere and everywhere it occurs.”

In a number of touching moments, President Trump honoured two Holocaust survivors and three American soldiers who liberated Jews in the Holocaust. He also praised a policeman who was shot numerous times saving Jews during the Pittsburgh synagogue shooting last year.

“Just months ago, 11 Jewish-Americans were viciously murdered in an anti-semitic attack on the Tree of Life Synagogue in Pittsburgh.  SWAT Officer Timothy Matson raced into the gunfire and was shot seven times chasing down the killer.  Timothy has just had his 12th surgery — but he made the trip to be here with us tonight.  Officer Matson:  we are forever grateful for your courage in the face of evil.

Tonight, we are also joined by Pittsburgh survivor Judah Samet.  He arrived at the synagogue as the massacre began.  But not only did Judah narrowly escape death last fall — more than seven decades ago, he narrowly survived the Nazi concentration camps.  Today is Judah’s 81st birthday.  Judah says he can still remember the exact moment, nearly 75 years ago, after 10 months in a concentration camp, when he and his family were put on a train, and told they were going to another camp.  Suddenly the train screeched to a halt.  A soldier appeared.  Judah’s family braced for the worst.  Then, his father cried out with joy:  “It’s the Americans.”

Lawmakers briefly interrupted the State of the Union to serenade Judah Samet, an 81-year-old Holocaust survivor who also survived October’s Pittsburgh synagogue shooting, with an impromptu version of “Happy Birthday” as the President announced it was Judah’s birthday that day. After they concluded their song, Judah shouted out from the gallery “Thank you” as the President joked “they wouldn’t do that for me”.

“A second Holocaust survivor who is here tonight, Joshua Kaufman, was a prisoner at Dachau Concentration Camp. He remembers watching through a hole in the wall of a cattle car as American soldiers rolled in with tanks.  “To me,” Joshua recalls, “the American soldiers were proof that God exists, and they came down from the sky.”

I began this evening by honoring three soldiers who fought on D-Day in the Second World War. One of them was Herman Zeitchik.  But there is more to Herman’s story.  A year after he stormed the beaches of Normandy, Herman was one of those American soldiers who helped liberate Dachau.  He was one of the Americans who helped rescue Joshua from that hell on earth.  Almost 75 years later, Herman and Joshua are both together in the gallery tonight — seated side-by-side, here in the home of American freedom.  Herman and Joshua:  your presence this evening honors and uplifts our entire Nation.

When American soldiers set out beneath the dark skies over the English Channel in the early hours of D-Day, 1944, they were just young men of 18 and 19, hurtling on fragile landing craft toward the most momentous battle in the history of war.

In his speech, which covered a wide range of issues, President Trump also declared the Islamic State militant group all but defeated in Syria. These are all positive points that show President Trump is a friend of Israel and is taking action against radical Islamic forces in the Middle East.

The video below is the full speech. The President talks about the above at around 1hr 39mins.