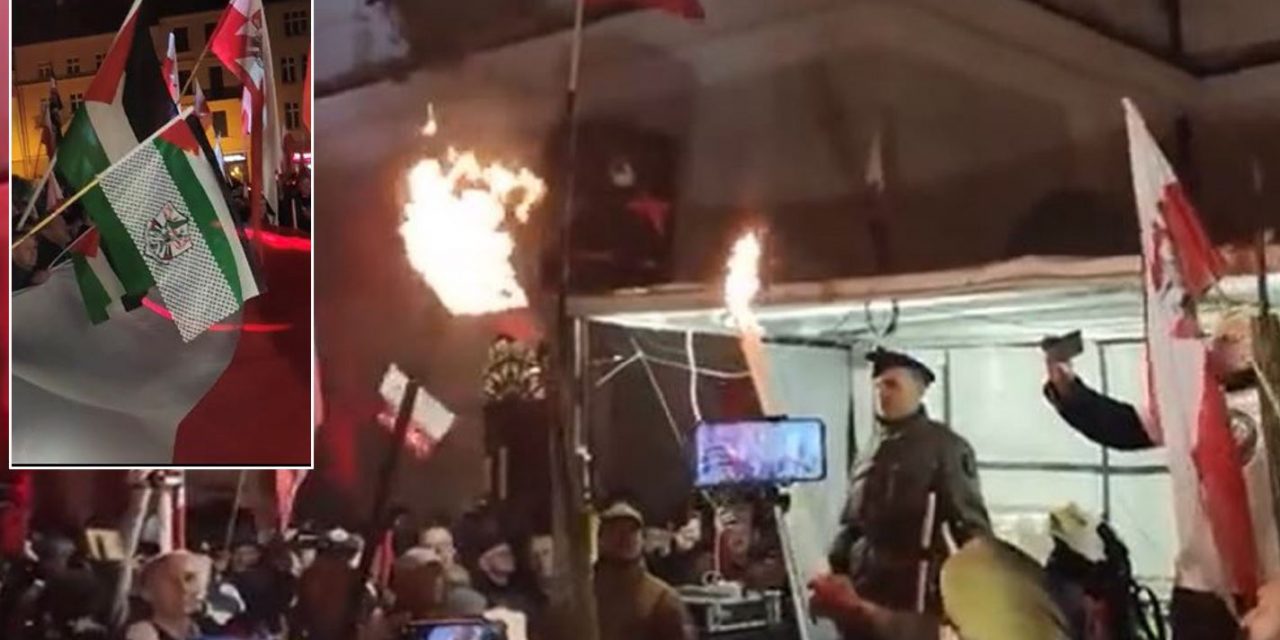 Polish police have arrested the ringleaders of an anti-Semitic neo-Nazi demonstration in the town of Kalisz where participants shouted “Death to the Jews!” among other slogans and set fire to a copy of a local decree for the protectiion of Jews.

Three men have been charged, reports the Algemeiner. The demonstration took place in the Main Market Square of Kalisz last Thursday and featured a ceremonial burning of the Statute of Kalisz — a ruling issued in 1264 that guaranteed key legal protections for Jews living in the medieval Duchy of Poland.

There were also reports of the crowd chanting ‘Intifada’, waving Palestinian flags, and a keynote speaker wore a kaffiyeh. Another speaker proclaimed “the Zionists are our enemy.”

Polish President Andzrej Duda excoriated the “barbarism perpetrated by a group of hooligans in Kalisz,” even suggesting that the demonstration could be regarded as an “act of treason.”

Yesterday Polish ultra-nationalists in Kalisz burned a copy of the "Statute of Kalisz," a document from 1264 that legalized the Jewish presence in Poland and penalized attacks on synagogues.

Prosecutors must take action against this criminal incitement of hatred against Jews. https://t.co/e39JAZYoQe

On Sunday evening, hundreds of Kalisz residents rallied in the center of the town for a protest condemning last Thursday’s scenes of antisemitic incitement.

Several Polish parliamentarians spoke at Sunday’s protest, insisting that Kalisz’s historic reputation as city of tolerance would not be tarnished by extremist provocation.

“What happened on November 11 in our city is a shameful episode that should never have occurred, but someone allowed it and I will not forgive the city’s authorities for opening the gates of this wonderful city to brownshirt agitators,” Mariusz Witczak, an MP representing the centrist Civic Platform, told the gathering.

The recent shameful acts of #antisemitism in Kalisz must be investigated & condemned. We must preserve the memory of Szmul & all other victims who suffered from hateful antisemitic ideology. pic.twitter.com/NqJj2QHIA9

yesterday in Kalisz during the nationalist’s independence march a copy of Statue of Kalisz (the statue was made in 1264 and it gave polish Jews official protection, rights) was burned down. People were screaming things like: “we erase the Jewish rights from Polish land” and more pic.twitter.com/GERSWtKeI4

Local councillor Piotr Mrozinski emphasized that “Kalisz is not a hostile, racist or antisemitic city.” He recalled that earlier this month, Kalisz had awarded the title of “Honorary Citizen” to Theodor Meron — a prominent American judge and expert on humanitarian law who was born into a Jewish family in Kalisz in 1930.

Sunday night’s counter-protest also heard from a group of Israelis descended from Jewish immigrants from Kalisz.

“As Israeli Jews who emigrated from Poland, we are proud of our country of origin and its culture,” the group stated in a letter that was read out to the gathering.

At Thursday’s white nationalist “Kill the Jews” rally in Kalisz, Poland, the crowd chanted ‘Intifada’, waved Palestinian flags, and a keynote speaker wore a kaffiyeh. Another speaker proclaimed “the Zionists are our enemy.” pic.twitter.com/gvuURJV5Hy

“We know that the recent extremist demonstration in Kalisz does not represent the majority of Poles and Polish culture. In every country there are groups of people who have to hate someone or blame them for all the troubles that occur in their country,” the letter continued.

A spokesperson for the Polish police said that regional police officers had been “working on this case throughout the weekend, analyzing and developing the evidence that was delivered to the prosecutor’s office.” In a separate statement, a spokesperson for the district prosecutor confirmed that the three offenders were facing prosecution for “a crime involving the promotion of fascism or other totalitarian regimes and attacks on the grounds of xenophobia, racism or religious intolerance.”