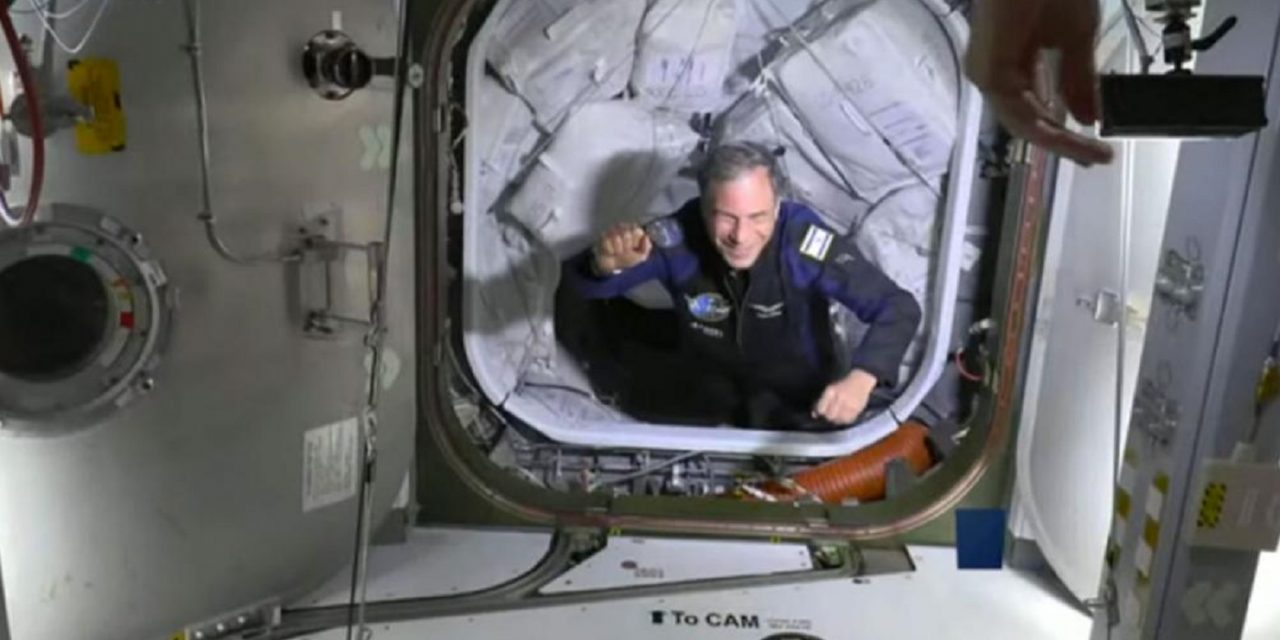 Eytan Stibbe has become the first Israeli to enter the International Space Station.

Israel’s second-ever astronaut says he plans to celebrate Passover in space and has acknowledged that it is the first time Hebrew has been spoken on the station.

“Welcome to the International Space Station. It’s the first time that it’s possible to speak in Hebrew here,” he said speaking Hebrew at a welcome ceremony upon his arrival.

Eytan Stibbe was one of four astronauts who took off last Friday on the privately-funded Rakia mission that successfully docked at the ISS the next day.

Stibbe was given a gift to take to space from Israel’s president – a glass cube inscribed with a prayer in the handwriting of the first chief rabbi. He let it float in zero gravity and read this line: “Establish peace in the land and everlasting joy for its inhabitants”

Eytan Stibbe was given a gift to take to space from Israel's president – a glass cube inscribed with a prayer in the handwriting of the first chief rabbi.

Eytan let it float in zero gravity and read this line: "Establish peace in the land and everlasting joy for its inhabitants" pic.twitter.com/dsUzMvRGsm

On Saturday, Stibbe and his three fellow passengers on board the SpaceX Dragon capsule communicated with the control room on Earth, with the Israeli businessman speaking Hebrew.

“Hello everybody,” Stibbe said in Hebrew. “We’ve gotten used to the lack of gravity by now and have started to feel more comfortable.”

Hello from the other side!

Sending an intergalactic shalom to Israeli Eytan Stibbe, who is on a ten day @Axiom_Space mission currently at the @Space_Station.

“I have another indicator of the lack of gravity,” he said, while letting go of a toy in the shape of an octopus given to him by his granddaughter before his departure.

“The launch was amazing,” he said. “We’re currently over Africa and in about 15 minutes we will fly over Israel’s shorelines.”

I love the little "bounce" visible when #AX1 Crew Dragon Endeavour does the soft dock at 32s pic.twitter.com/dBCGZ8NX7V

The first-ever Israeli astronaut, Ilan Ramon, was killed in 2003 when the Space Shuttle Columbia disintegrated upon re-entry into the atmosphere, killing all seven crew members on board. Members of the Ramon family were on hand when Stibbe’s flight was first announced in 2020, and were also present at the take-off in Orlando on Friday.

Stibbe plans to pay tribute to Ramon during the mission. He is carrying surviving pages from Ramon’s space diary, as well as mementos from his children.

Stibbe will be carrying out some 35 experiments for companies and research institutions during his time on board.

But an experiment of a lighter note is a school project Stibbe will be conducting on behalf of school children back home in Jerusalem. Following a competition among Israeli schools, the astronaut will be testing students’ theories and giving a lesson via video link to answer the question how to make Shabbat and Hanukkah burn for longer than 20 minutes in space.