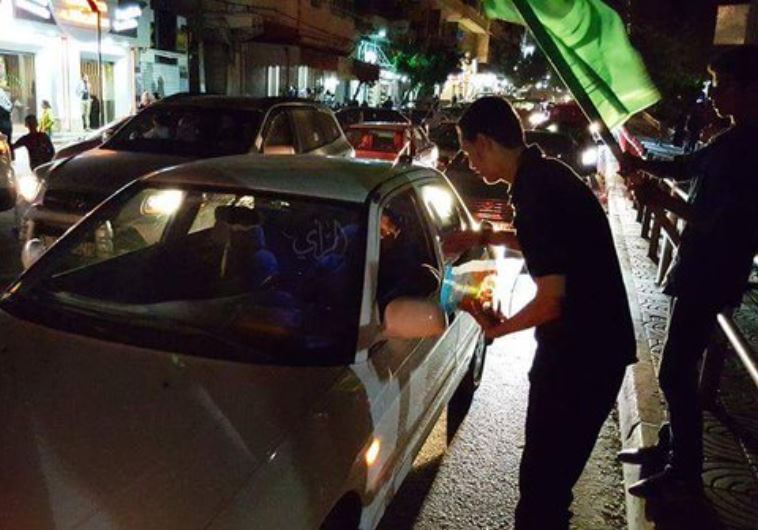 Palestinians in the West Bank and east Jerusalem took to the streets to celebrate the deadly terrorist shooting in Tel Aviv on Wednesday night that left four people dead and several others wounded.

Upon hearing the reports of the shooting, dozens of Palestinians gathered at Damascus Gate in the Old City of Jerusalem, singing out loud and cheering the gunmen.

In the West Bank city of Tulkarm, many young men took to the streets and distributed candies to the local drivers, while in the Dheisheh Refugee Camp in Bethlehem dozens of Palestinians participated in a march praising the terror attack.

It comes as Hamas, the Islamic terror group that rules Gaza, welcomed the attack but did not claim responsibility for it. Hamas official Mushir al-Masri called the shootings a “heroic operation” and the group later issued an official statement promising the “Zionists” more “surprises” during the Muslim holy month of Ramadan.

According to Jerusalem Post, Palestinians also expressed their joy on social media networks, where they created the hashtags “#Carlo Bullet,” after the name of the improvised submachine gun used in the attack, and “#Ramadan Operation” to laud the horrendous terror shooting.

Another popular hashtag on Palestinian social media networks was “#We broke the fast killing them,” referring to the fact that the two gunmen broke their Ramadan fast in the restaurant where they later shot people.

Following the shooting, Salma al-Jamal, a Palestinian news anchor working at Al-Jazeera TV, wrote on her Twitter page: “The Ramadan operation that took place today is the best answer to stories we have been hearing about ‘peace process’ that some people are trying in vain to revive.”

In a striking contrast to the Palestinian reaction, the official Saudi media strongly denounced the Tel Aviv terror attack.

Reporting about the shooting on its Facebook page, the well-known Saudi TV channel al-Arabiya referred to the people injured in the attack as “victims,” and not as “settlers” as most of the Arab outlets usually refer to Israelis. This remark aroused cynical reactions among users on social media, who claimed that the channel distorted the report to defend Israel, because the victims are Palestinians, not Israelis.

Dahham al-Enazi, a member of the Saudi Journalists Association, also condemned the shooting in a series of remarks on his Twitter page.

“The Tel Aviv attack is terror and thuggery. Our solidarity and support for the Palestinian people does not mean that we accept the killing of innocents and civilians. We would like to extend our condolences to the families of the victims,” Enazi said.