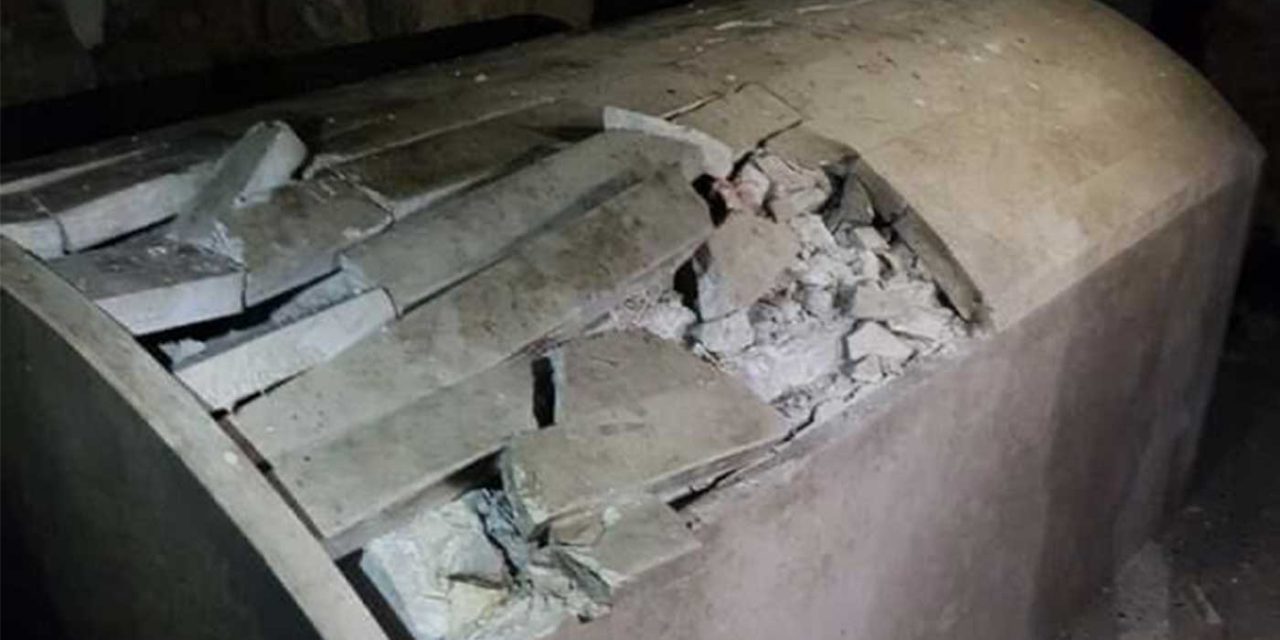 Palestinian rioters have vandalised Joseph’s Tomb in the city of Nablus, a Palestinian town in Judea and Samaria (the West Bank).

The attack happened on Sunday evening when riots broke out in protest of Israeli security forces arrested suspects in a deadly terror attack in Tel Aviv that claimed the lives of three Israelis.

Overnight Sunday, around 100 Palestinians broke into the site, rioted and smashed objects inside, and set it ablaze, before they were dispersed by Palestinian security forces, IDF spokesman Brig. Gen. Ran Kochav said.

A second attack took place on the site, this time on Monday morning. A man was filmed throwing rocks near the already damaged tomb.

Prime Minister Naftali Bennett condemned the attack, saying he was appalled by the images of the damage to the shrine.

“During the night Palestinians destroyed Joseph’s Tomb. Dozens of Palestinian rioters in a campaign of destruction simply violated a holy place for us, the Jews,” Bennett said at the start of the cabinet meeting.

“They broke the tombstone on the grave, set fire to rooms in the compound — I saw the pictures and was shocked,” he said.

“We will not abide such an assault on a place that is holy to us — on the eve of Passover — and we will get to the rioters,” he said. “And of course we will make sure to rebuild what they destroyed, as we always do.”

Earlier, Defense Minister Benny Gantz said the vandalism was a “grave event,” and said he had sent a “strong message” to the Palestinian Authority about the attack on the shrine.

“The vandalism of Joseph’s Tomb is a grave event and a serious violation of freedom of worship in one of the holiest places for every Jew. It violates the feelings of the entire Jewish nation, especially when it occurs during the Muslim holy month,” Gantz said in a statement, which he released in Hebrew, Arabic and English.

The site is believed to house the remains of Joseph from the Bible (Genesis 37, 39-45). He was the most favoured of Jacob’s twelve sons and was gifted a colourful coat. His brothers were jealous of him and sold him into slavery, where he was falsely imprisoned but eventually became an important figure in Pharaoh’s government after he interpreted his dreams. He was able to use his position to save the Jews and reconciled with his family.

This is considered by many Jews as the third holiest site in Judaism. And it is important to Christians also.

Muslims claim it as a holy site of their own, claiming that an Islamic scholar was buried there. However, the actions of Palestinians towards this site do not seem to show this. This is not the first time the tomb has been desecrated by Palestinians.

On the other hand, Jews risk their lives visiting this site. On Monday, two Jewish Israelis were shot as they attempted to visit the site.

The two men, part of the Bratslav Hasidic community, were attempting to get to the shrine without having coordinated with the military, which usually oversees visits by Jewish worshipers.

According to Israel’s Channel 12 News, the two said they had wanted to help restore the shrine.

After the shooting, the men, and the rest of the group they were with, managed to reach an IDF checkpoint near the shrine. They were given first aid and were taken to Beilinson hospital in Petah Tikvah, the army said.

Israel's minister of defense has said the cost of dealing with Iran is higher now than a year ago, but less than it will be in a year, adding that Iran is just a "few weeks" from being...
Read More
Share
Tweet
Email
More
96 Shares