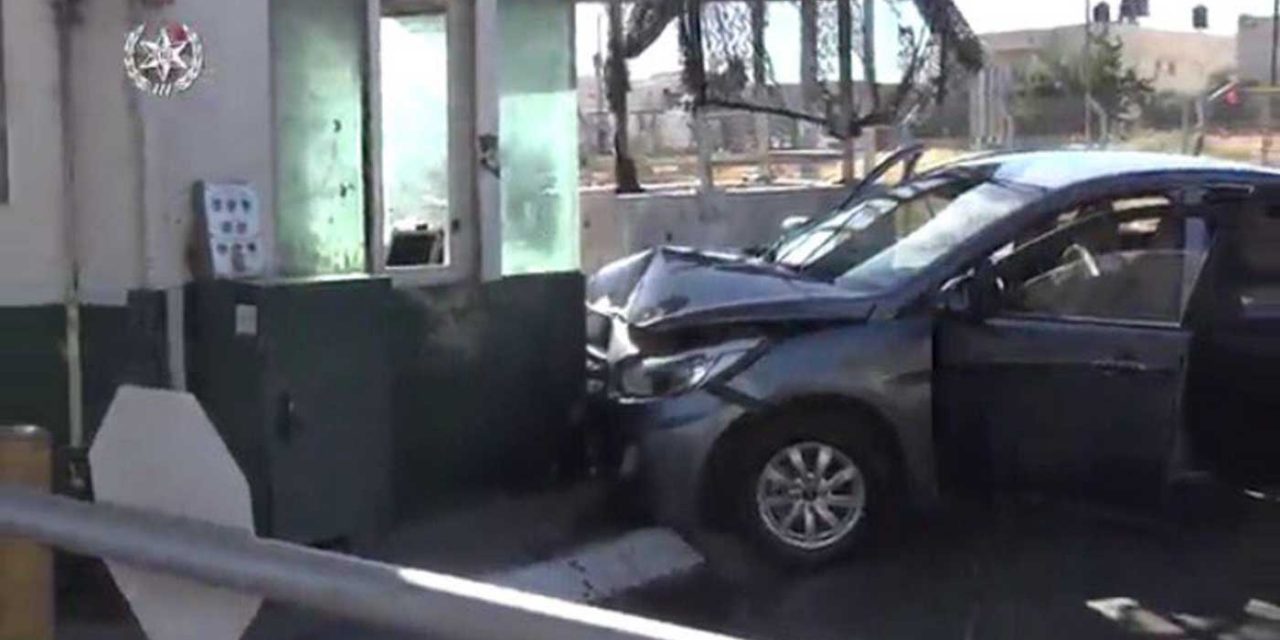 A Palestinian terrorist has been shot dead after ramming his car into an Israeli policewoman at a checkpoint in the West Bank (Judea and Samaria).

The incident took place on Tuesday, with video footage of the attack being released by Israel on Wednesday and shows the Palestinian’s vehicle accelerating suddenly and turning to hit the Israeli officer. The policewoman launched into the air and falls to the ground whilst other police officers shoot the attacker as he exits his vehicle.

The footage blurs out the attacker as he walks backwards and is neutralised prompting some to wrongly speculate that he was running away from police, however, the video footage shows on the right-hand side a less blurred image of the attack with the suspect facing towards police as he exits his vehicle before stumbling backwards and falling on his side as he is shot.

A police statement said Mr Erekat waited for an opportune moment and “wildly plunged” the vehicle into the forces at the scene.

The police officer was Shani Orr Hama Kadosh, who recounted the incident: “I signaled to him to halt, the car started to slow down, and I moved in his direction,” Kadosh told Channel 13 news. “He saw that I took a step, he looked me in the eye, turned the steering wheel and rammed into me, and I flew to the other side” of the median.

“I didn’t understand at first when he looked at me, and only when I went flying, I understood that this was an attack,” she said.

The suspected attacker was Ahmad Moustafa Erekat, 28, a family member of the Palestinian Authority’s spokesperson to the United Nations, Saeb Erekat. Erekat often uses emotional manipulation in his speeches, conflating events and demonising Israel at every turn. This time is no exception, with the veteran politician claiming his nephew was killed “in cold blood”.

“Ahmed Erakat was murdered in cold blood at the Wadi al Nar road block, by Israeli occupying forces. They continue their lies and claim he tried to run over the soldiers. Netanyahu is responsible,” Mr Erekat senior said.

“The car was going at less [than] five kilometres an hour. This is not the speed needed for an attack. We demand an international investigation.”

Despite Erekat’s wild accusations, the CCTV footage is corroborated by numerous witness reports as well as separate photographs of the aftermath of the incident. The car was clearly travelling faster than “5mph” as Erekat senior claims and the soldier was thrown backwards violently and lightly injured.

Hiba Erekat, the man’s cousin, said the family was baffled by the video.

“We know Ahmad. He had no reason to commit suicide. He was on good terms with his fiancée, his family and people in his town,” she said. “We are wondering if he had any personal problems and wanted to escape.”

For those trying to claim “checkpoints shouldn’t exist in the first place” as a way to justify a ramming attack here are some reasons for why checkpoints exist:pic.twitter.com/KTBCB7upHg

In the second video that circulated on social media Wednesday, Erekat is seen in his car, saying “Your bro’s no snitch. I never betrayed the homeland (Palestine).”

He appears to refer to Israeli officials or agents pressuring him, “[trying to] get me in trouble” by putting his photo on the Facebook page of COGAT, the body that coordinates between Israelis and Palestinians in the West Bank.

Erekat’s family said the video was made months ago, refuting its characterization as a testimonial made ahead of a planned attack. However, the fact it exists at all shows the mental state of the man, who seems to be suffering emotionally with the fact that some Palestinians see him as a traitor to his own country. His attack on the Israeli policewoman could have been his idea of proving himself or possibly as a way of escape, knowing he would likely lose his life.

Whether the ramming was intentional or not is up for debate. However, the vast number of car-rammings committed by Palestinians against Israelis, both security personnel and civilians, along with the propaganda of the Palestinian Authority showing images to children of cars attacking Jews, makes it hard to believe this was an accident.

Regardless, Israeli police are trained to neutralise threats in case of these attacks. In the past, Palestinian terrorists have killed civilians using their car and then exited the vehicles armed with knives and continued their attacks. In these split-second moments (this incident took less than 10 seconds from start to finish) and when adrenaline is high police officers react quickly and decisively to neutralise the threat. This is exactly what happened in this incident.