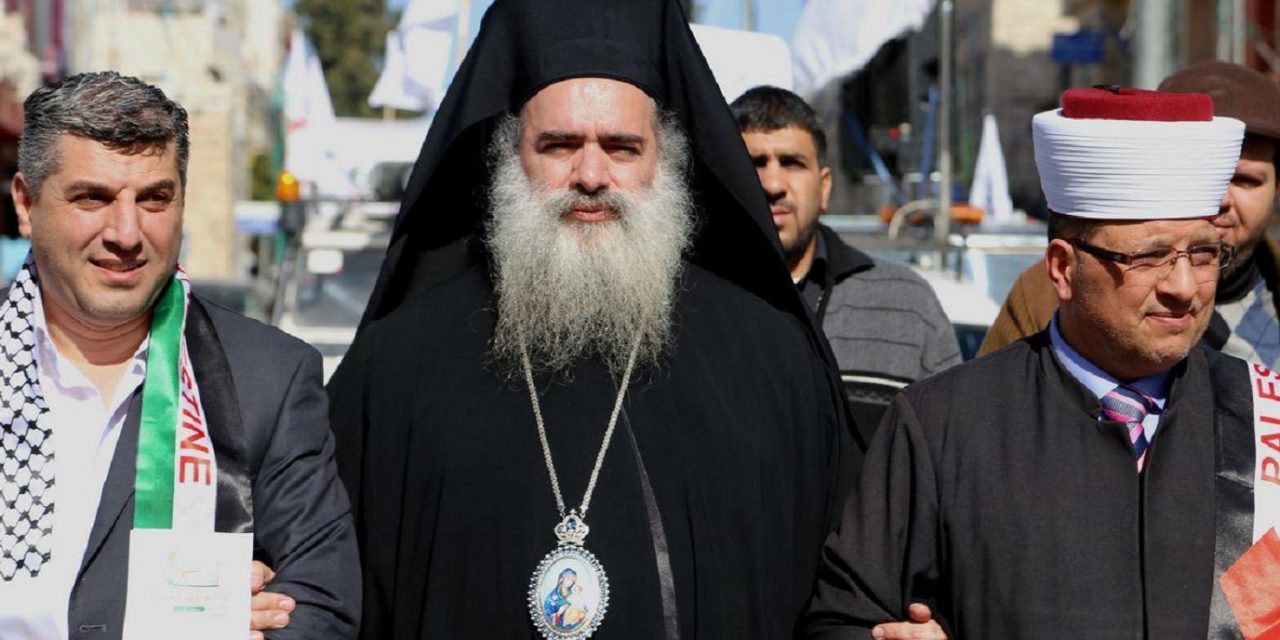 A Palestinian  archbishop has launched an attack on Christians that support Israel, describing them as “pulpits in the service of the Zionist enterprise”.

Wrapped in anti-Semitism and false theology, the Head of the Sebastia Diocese of the Greek Orthodox Church in Jerusalem Archbishop Atallah Hanna stated that “Evangelical Christians” or “Zionist Christians” do “not belong to Christianity,” and that they “have no connection to the values of Christianity”.

Whilst we are used to hearing Palestinian Muslim leaders deny the right for Israel to exist, it is sad that a leader in the name of Christianity is perpetuating the sames lies that completely contradict the Bible. And many Christians that wish to show compassion on Christians living in the Palestinian territories, are in danger of being deceived by his hatred for Israel.

“Head of the Sebastia Diocese of the Greek Orthodox Church in Jerusalem Archbishop Atallah Hanna said that neither the Christian nor the church dictionary contain anything called ‘Evangelical Christians’ or ‘Zionist Christians.’ He added: ‘The aforementioned do not belong to Christianity at all; they have no connection to the values of Christianity and to the evangelical principles that always prefer to identify with the deprived and ill-fated of the world. They are closer to Judaism and Zionism and have no connection to Christianity.’

Archbishop Hanna said: ‘The Christian Evangelists are tantamount to pulpits in the service of the Zionist enterprise. They are enemies of the Christian values, and when they come to Palestine they do not visit the Church of the Holy Sepulchre and the Church of the Nativity, but rather the colonies located on the stolen lands of our people as a sign of solidarity with the occupation.'”

Hanna is wrong to claim that there is no connection between Zionism and the values of Christianity. In fact an attack on “Zionism” is also an attack on Christian values. By its organic definition, Zionism is the belief that the Jewish people have an indigenous right to live in the land of Israel. In a political sense, it supports the belief that Jews have the right to self-determination in the re-established State of Israel. But standing with Israel is not a political issue, but a biblical one. The claim that the land of Israel belongs to the Jews is not man-made, but rather granted by Almighty God 3,000 years ago.  Those that deny the Jewish people’s connection to the land of Israel therefore deny the authority and accuracy of the Bible. Those that refuse to accept God’s promise to Israel, effectively place themselves in opposition to God. You can read more about this in our article “Reclaiming the definition of Zionism”.

Hanna is wrong to say “evangelical Christians”, as he describes, have no connection to Christianity. But when he says they are “closer to Judaism” he might ironically be onto something. Our Judeo-Christian heritage precedes even the Church of the Holy Sepulchre and Church of the Nativity. The Christian’s appreciation for the land of Israel is linked to the inherent right that the Jewish people have to the land. Also, Christians owe a debt of gratitude towards the Jewish people for their contributions, which gave birth to the Christian faith. No matter from what nation or people—every Christian owes their thanks to the Jews for their spiritual inheritance.

Hanna is wrong to describe the land as stolen. God gave Zion as an eternal inheritance to the descendants of Abraham, Isaac and Jacob.  Zion (mentioned 150+ times in the Bible) is in fact central to Christian faith and theology. But Christians leaders, such as Hanna, have turned the Zionism into a dirty word because it doesn’t fit their anti-Semitic agenda. It is not possible to be anti-Zionist (against the existence of the Jewish state) without being anti-Semitic.

Hanna is wrong to say Christian Evangelists are “enemies of the Christian values”. In fact, Hanna himself has positioned himself as an enemy of the truth.  It is sadly not surprising that Hanna has visited imprisoned terrorists in the past and undertaken advocacy against “normalization” with Israel. He has bought into the lie that the Church has replaced Israel (sometimes called Replacement Theology”), which always leads to an anti-Semitic worldview against Israel and the Jewish people. This false doctrine, which is prevalent in some sections of the church in Britain, is not consistent with New Testament teaching that the Church has been “grafted in” to the promises and not superseded them. God’s covenant with His chosen people, the Jews, remains.

Archbishop Hanna supports a seditious version of Replacement Theology, Palestinian Liberation Theology, a teaching with a narrative that Jesus was not a Jew, but a Palestinian and that Israel has no historical or theological right to exist. This movement among pro-Palestinian Christians has joined hands with Islam for the purpose of delegitimising, isolating and destroying Israel.

At CUFI UK, we reject this deception outright. We must pray for our Christian brothers and sisters living in the Palestinian territories, but let’s be very clear – Archbishop Atallah Hanna does not represent the values of millions of Christians around the world that love Israel and will defend the Jewish people and their right to live in the land.