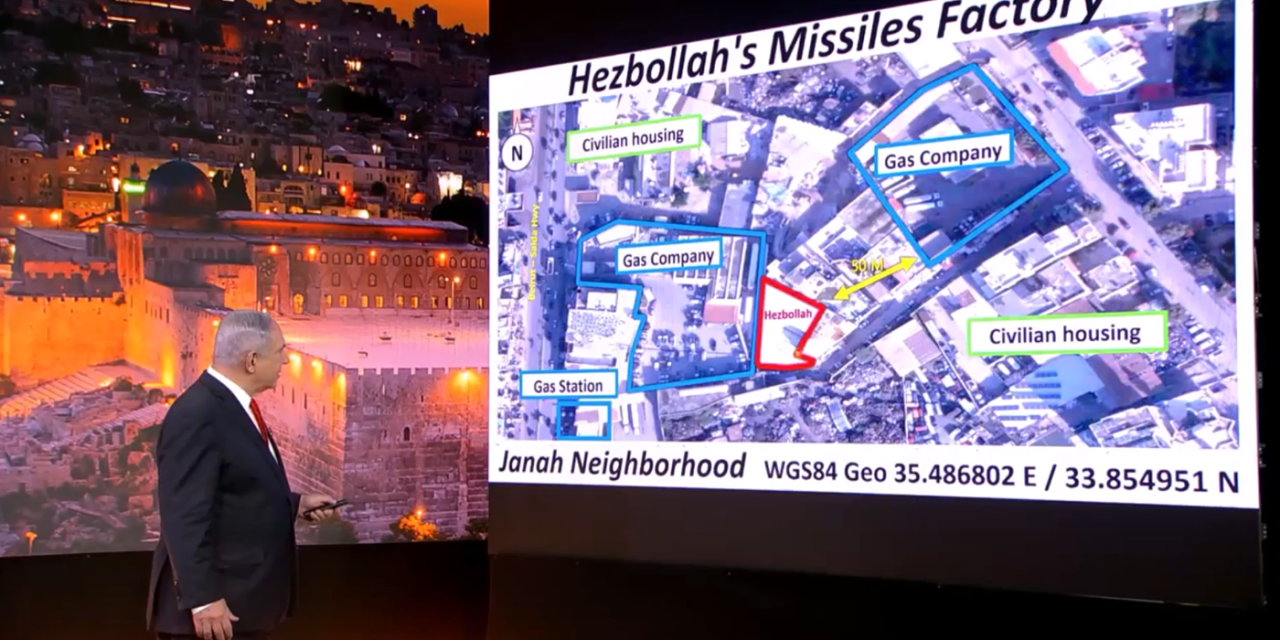 Israel’s Prime Minister Benjamin Netanyahu has exposed Iranian terrorism through its proxy Hezbollah in Lebanon and shown how the regime continues to place Lebanese people in harm’s way while the world looks on and does nothing.

“Israel and states across the Arab world not only stand together in advancing peace. We stand together in confronting the greatest enemy of peace in the Middle East—Iran.
Iran wantonly and repeatedly attacks its neighbours, and it’s terror proxies are directly involved in violence throughout the Middle East, including in Iraq, Syria, Yemen, Gaza and of course, Lebanon.

Two hundred people died, thousands of people were injured, and a quarter of a million people were made homeless.

Now, here is where the next explosion could take place. Right here. This is the Beirut neighbourhood of Janah. It’s right next to the international airport. And here, Hezbollah is keeping a secret arms depot. This secret arms depot, right here, is adjacent, a meter away, from a gas company. These are gas canisters. Right here. It’s a few meters away from a gas station. It’s fifty meters away from the gas company. Here are more gas trucks. And it’s embedded in civilian housing here, civilian housing here. For the Janah neighbourhood residents, this is the actual coordinates.

So I want to show you the entrance to Hezbollah’s missile factory. Because that’s what it is. It’s right here. This is the gas company, and this is the missile explosive depot.
I say to the people of Janah, you’ve got to act now. You’ve got to protest this. Because if this thing explodes, it’s another tragedy.

I say to the people of Lebanon, Israel means you no harm.

Iran and Hezbollah have deliberately put you and your families in grave danger.

And what you should make clear is that what they have done is unacceptable. You should tell them, tear these depots down.

Just a few days ago, one of these depots exploded at Ain Qana in south Lebanon.

And that is why the international community must insist that Hezbollah stop using Lebanon and Lebanese civilians as human shields.”