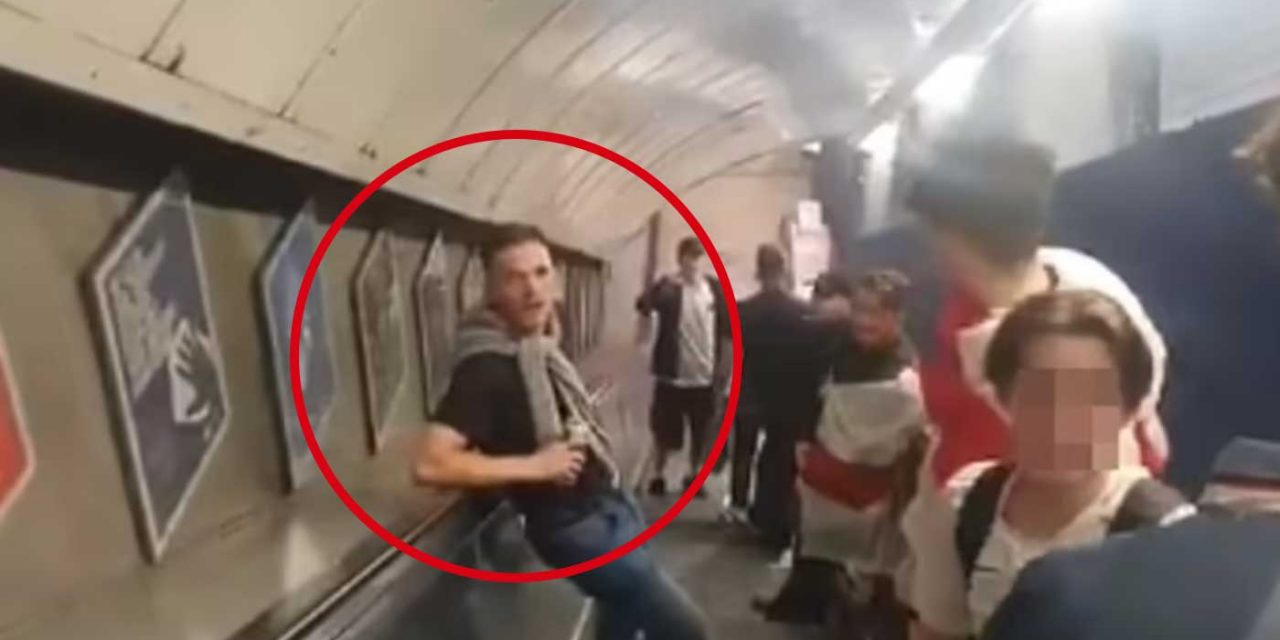 An anti-Semitic man shouted, “f***ing hate the Jews” at a Jewish man while on an escalator in the London underground on Saturday, one of two anti-Semitic incidents against the same individual in central London.

Footage shared online by the victim’s brother shows a group of young males on an escalator at a tube station.

A man who was standing on the left of the escalator near some England football fans was heard shouting ‘f***ing hate the Jews’ while he made a banging sound with his hand.

One of the other group below him then intervened saying: “Shut the f**k up.”

While another individual is heard to say: “We’ve got a Jew behind us.”

An hour prior, he had another antisemitic encounter on the @TfL tube.

Family members of the group of football fans contacted MailOnline on Sunday and said the boys, who were wearing England flags, were not in any way associated with the man who was shouting antisemitic abuse.

The group of seven boys – who are all aged between 17 and 18 – are all in fact Jews and we’re trying to stick up for the man who was being verbally abused, David Adler, the father of one of the boys, said.

Hearing the comment about the “Jew behind us” one of the group of England fans – who is Adler’s son – retorted and said: “Actually, you’ve got nine Jews behind you” in an attempt to stick up for the abused man.

Adler later told MailOnline: “I’m pleased that my son chose to speak out and support the Jewish man on the underground.”

“We’ve always told our kids to call wrong out and that’s what they were doing.”

“A single bigoted racist has attacked a Jewish man, and a bunch of other football fans – who happen to ironically be Jewish – are trying to defend the guy.”

Mr Adler added: “The attacks on the Jewish man yesterday is horrific. I am genuinely nervous about my children when they go into town because of antisemitism.”

Shockingly, this was the second anti-Semitic incident the victim faced that day. Earlier in the day, he filmed another anti-Semitic abuser who was threatening him saying, “I will slit your throat for Palestine”.

It was a clear sign of anti-Semitism being driven by hatred of Israel. Click here to read more about that story.

British Transport Police said in a statement: “We’re aware of a video posted online of a group displaying antisemitic behaviour on a London Underground escalator.

Siwan Hayward, director of compliance, policing operations and security at TfL, said: “We are appalled by the shocking incidents. All our customers have the right to travel without fear of abuse or intimidation, and hate crime has absolutely no place on our network.

“We stand against hate crime and are looking into these incidents urgently with the police. We urge anyone who experiences or witnesses hate crime to report it to the police immediately. It’s important that people tell us so we can stop it from happening again.”

The antisemitic incidents were condemned by the president of the Board of Deputies of British Jews Marie van der Zyl. She said: “It is absolutely intolerable that a Jewish passenger travelling on public transport should be subjected to disgusting racist threats and abuse in the UK in 2021 not once but twice on the same day. Those responsible should be must be tracked down and prosecuted.”